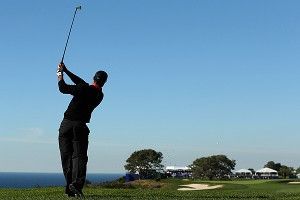 The Pacific fog blanketed the south course at Torrey Pines on Saturday, wiping out an entire round of the Farmers Insurance Open, so Tiger Woods was forced to finish his first PGA win of 2013 in the relative anonymity of a Monday afternoon. It wasn’t a pretty ending — the slow pace frustrated him, he lost his swing, and he played the last five holes at +4. But he’d scored so well in the first 67 holes that it didn’t matter; he still finished four shots clear of second-place Brandt Snedeker and Josh Teater. Sloppy denouements aside, this was a rather exciting moment for the sport — a tantalizing glimpse of Vintage Tiger, the mythic player with that singular, astounding ability to grab the golf world by the balls.

If that sounds crass, well, sorry, but there’s no better way to describe his style. Tiger Woods is not a grinder on a large scale, though there’s nobody better at rescuing himself from an awful tee shot. He is not a Sunday surger — in fact, he’s never come from behind on a Sunday in a major tournament. All 14 of his wins have come after he led or shared the lead after 54 holes, and he’s only been caught once from that position, by a flash in the pan named Y.E. Yang at the 2009 PGA Championship, just three months before all hell broke loose. (That third-round number is 49 of 53 in all PGA events.) And though he has some classic pressure performances on his résumé, we’ll remember Tiger by his pitiless ability to spend four days crushing everyone brave or foolish enough to swing a club on the same course. To me, his signature win will always by the 2000 U.S. Open at Pebble Beach. While the field bemoaned the harsh conditions, and nobody turned in a better 72-hole score than +3, Tiger finished at -12. That was the start of four straight major wins, a.k.a. The Tiger Slam, and arguably the peak of his career. That was Vintage Tiger.

Since the infamous events of Thanksgiving 2009, Vintage Tiger has rarely been seen. By his standards, 2010 was a wash, with fourth-place finishes at the Masters and U.S. Open highlighting a winless season. It got worse in 2011, when he withdrew from the Players Championship and spent three months recovering from his latest knee injury before finishing the season with a whimper. The long-awaited return to first came at the Arnold Palmer Invitational in 2012, when Tiger won his first tournament since the scandal. He would win again at the Memorial and the AT&T National, and finish second on the money list behind Rory McIlroy, but while the young phenom finished with a win at the PGA Championship and played a big part in Europe’s triumph at the Ryder Cup, Tiger couldn’t break through at the majors.

So the win at Torrey Pines, Tiger’s 75th career victory on the PGA Tour, raises a key question — does the January success signify a return to the form that will lead him to major glory, and set him back on the path to breaking the sport’s two biggest records — Sam Snead’s 82 Tour wins and Jack Nicklaus’s 18 majors — and becoming the greatest of all time?

There’s at least one piece of evidence in his favor. Tiger has won early-season events at Torrey Pines — the tournament is called the Farmers Insurance Open now, and was known before 2010 as the Buick Invitational — seven times. In the season following the first six wins, he went on to win at least one major title five times. (He won two majors twice.) So far, winning at Torrey Pines has been a decent indicator of major success. It’s also worth noting that his one other win at the course came in the 2008 U.S. Open, when he beat Rocco Mediate on one knee in a 19-hole Monday duel. That remains his last major victory, and maybe there’s some poetic closure to the idea of bookending four ugly years at a venue with nothing but good memories.

There are other signs, too. As Jason Sobel pointed out, Tiger finished -12 on the par-5s, a constant trademark from the days of major triumph. And he was scrambling like a madman, making pars and birdies from the rough, going up and down at will, and generally turning every tenuous situation into another scoring opportunity. He also seemed more at ease with the media. He still didn’t actually say anything — blood from a stone, and all that — but the whole dynamic seemed less tense and antagonistic. CBS’s David Feherty even got a laugh out of him Monday when he pointed out that Tiger had played the last four holes “like a three-dollar violin.”

It’ll take some time before we know if Vintage Tiger is truly back. His next appearance is still a bit of a mystery — it definitely won’t be at the Phoenix Open next week (maybe because he cringes at the idea of playing an event sponsored by Waste Management), or the Pebble Beach Pro-Am a week later, and it probably won’t be at Riviera — but we know he’ll at least show up for the Accenture Match Play Championship in late February. Despite his difficulty in pairs matches at the Ryder Cup, Tiger is still the greatest match play golfer of his generation, and the sport’s equivalent to March Madness is the best place, outside of a major, for the vintage champ to confirm his return to form.