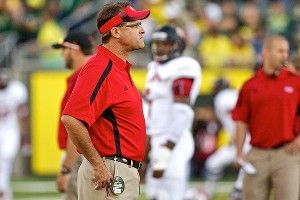 Arthur Gustav Malzahn III, 47, is the Unsinkable Molly Brown of college football coaches. Yesterday’s Twitter chatter focused on how Gus, as he’s known, managed to hop off Auburn’s sinking ship and then, a year later, become its captain. (Malzahn spent last season as head coach at Arkansas State.) But Malzahn is also the sole survivor of a more harrowing episode: the Springdale Five. I recount it here to show Malzahn is either the canniest guy in college football or the luckiest, and that in either case we should be in awe of his powers.

In 2005, Malzahn was an Arkansas high school coach, but one who was sitting on one of the greatest collections of talent the state had ever seen. Five of his Springdale High School players — the so-called Springdale Five — were being recruited by the power schools. Quarterback Mitch Mustain was Parade’s high school player of the year. Arkansas doesn’t have a surplus of four- and five-star recruits, so the Springdale Five became intense objects of desire for University of Arkansas coach Houston Nutt. “We’re going to protect what’s ours, first and foremost,” Nutt told Scout.com.

How do you keep great players in Arkansas? You pull the old AAU trick and hire their coach. That December, Nutt made Malzahn his offensive coordinator. Which isn’t to say Malzahn didn’t have credentials. He’d won state titles at two schools. He’d published a book outlining his offensive philosophy. But his hiring clearly had a transactional element. In February 2006, four of the Springdale Five committed to Arkansas. “I’m going to let Gus go,” Nutt said of his new offensive guru. “I’m going to turn him loose.”

Only Bill Stewart and Dana Holgorsen proved to be a more horribly matched pair. Malzahn was an offensive innovator who believed in no-huddle football. Nutt was a parishioner at the Church of Frank Broyles — which is to say, he liked to pound the ball. According to ESPN’s Ivan Maisel, Nutt junked Malzahn’s passing offense one week into the 2006 season, after the Razorbacks were blown out by USC.

This might have been the end of Malzahn, a high school comer kneecapped a week into his first college season. But the funny thing was, the Hogs’ offense turned out to be really good. Nutt’s running game flourished with Darren McFadden and Felix Jones. Malzahn, however limited he might have been, installed the Wild Hog formation, which allowed McFadden to throw and run. Arkansas won 10 straight, including upsets over Auburn and Alabama. At the end of the season, the Razorbacks were fourth in the NCAA in rushing yards per game and 108th in passing yards. Somehow, Malzahn got both the reflected glory of this success and the benefit of the doubt: If they’d just thrown the ball, who knows how many they could have won?

The same month, the parents of three of the Springdale Five took the unprecedented step of meeting with athletic director Frank Broyles to talk about the offense. “Our boys are used to catching 60 passes a year,” one dad told the Arkansas Democrat-Gazette. He suggested that by not installing the Malzahn offense, Nutt had sold the parents a “bill of goods.” Mitch Mustain’s mom, Beck Campbell, eventually released a statement saying that Nutt “has the valid right to determine the direction of the program” — something Nutt thought he already had.

“[Nutt] knows the passion of the Arkansas people,” Frank Broyles told a newspaper. When it came to Malzahn and his offense, Nutt clearly did not.

With their old coach in handcuffs, the Springdale players began to peel off. Damian Williams, a wide receiver, transferred to USC. Mustain asked for his release. Malzahn left Arkansas to become offensive coordinator at … Tulsa, a seeming demotion. Broyles vainly tried to spin it as a better job, because Malzahn would also become the Golden Hurricane’s assistant head coach.

The key to Malzahn’s unsinkabililty isn’t just that he had another job waiting. The key is that Arkansas fans overwhelmingly turned on Nutt, the reigning SEC Coach of the Year. “Gus Malzahn was the main reason Arkansas opened up the offense to best utilize its talent, until the last three games … then Malzahn’s control of the offense and potential big wins disappeared as we again started calling ultra-conservative plays that gave us no chance to win,” Lance Jones of Little Rock wrote to the Democrat-Gazette.

“Nutt put parameters on what Malzahn could do in play-calling and, bingo, disaster resulted,” Ron Yowell, of Bentonville, wrote to the same paper.

A couple of things were at play here. One is the strangely sky-high expectations at Arkansas, where a reputation built in the “Game of the Century” era is expected to survive the era of Les Miles and Nick Saban. The 2006 season was especially galling, because it fell just short of greatness. (Arkansas lost their last three games to finish 10-4.) The second factor was more universal: It’s a bummer when a popular coordinator leaves town and you’re stuck with an unpopular head coach. Arkansas fans didn’t yet know how unpopular. Within weeks, it was revealed that a Nutt family friend had trolled Mitch Mustain over e-mail. (Mustain transferred to USC.) A clever fan using Freedom of Information requests discovered Nutt had traded 1,000 text messages with a local TV anchor. Even though no evidence of an affair emerged, Nutt had been Petrino’d.

Gus Malzahn had only been in college football for three years, and only a true offensive coordinator for two, when he moved to Auburn in 2009. The next year, Cam Newton arrived, and even Kristi Malzahn’s Real Housewives of the SEC act couldn’t tarnish the legend. Houston Nutt, meanwhile, is scrounging for a job at South Florida. Mitch Mustain is out of football and pitching in the White Sox organization. Give Malzahn three years and he’ll probably be coaching the Patriots.

Filed Under: Auburn, The U