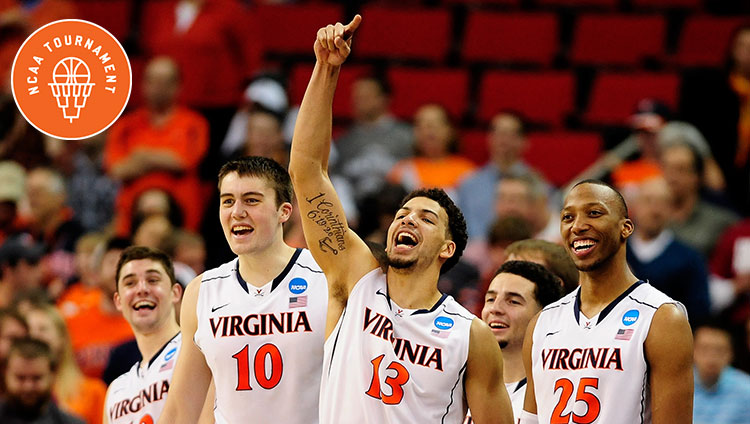 Let’s start here: In this year’s ESPN Bracket Challenge, 3.8 percent of all fans picked Virginia, the ACC tournament and regular-season champion (and no. 1 seed in the East Region), to win the national championship. That was almost 11 percentage points less than those who picked Michigan State, a team that lost seven of its last 12 games before the Big Ten tournament and drew the no. 4 seed in UVa’s region. It was the lowest among the no. 1 seeds (including Wichita State, a team that had not played a tournament-caliber opponent since December and got stuck in the region of death), and more than 20 percentage points less than those who picked the SEC champion Florida Gators (tops at 27.1 percent). James Quintong from ESPN research dug up a few numbers that showed that every no. 1 seed in 2013, 2012, and 2011 had at least 5 percent title support, meaning Virginia is the least-respected top seed in at least four years.

Alarmingly, that 3.8 percent was also lower this season than the 5.3 percent of fans who picked the Duke Blue Devils, a team that had finished behind Virginia in the regular season and lost to the Cavs in fairly definitive fashion at the ACC tournament in Greensboro. (The same Duke squad that had disappointed in big games all season, and had defensive numbers worse than any Coach K team in at least a decade.) Virginia’s percentages were roughly equal to Syracuse, which hadn’t played well since about February 1.

What about the pundits? Well, this site consolidated picks from experts at ESPN.com and CBS Sports, and exactly zero picked Virginia to win a national championship. It gets worse — not one of them even picked Virginia to make the Final Four. Add in others from CBS Sports, and still, not one Final Four pick … including Pete Gillen, who actually coached at Virginia from 1998 to 2005. Dickie V? Nope. Luke Winn, Brian Hamilton, or Pete Thamel at SI? No, no, and no, although Thamel is the first of 20 pundits to actually put Virginia in the Final Four. Make that two, as Jeff Eisenberg showed some respect for the Cavs, though nobody at Yahoo had them winning a title. Anyone at Grantland? Just me, and that was mostly because I knew it was a great way to make my bracket unique so that I could win every pool if the Cavs came through. Even Barack Obama had no Final Four love for Virginia, though if he were up for election this year, you’d have to think he’d have picked them to beat Michigan State.

Even if you go back to 2013, more people gave GONZAGA a chance to win the title as a no. 1 seed, and that might have been the clearest case of “there is absolutely no way this team can win a championship” in no. 1 seed history.

The question is, why? Virginia is not a mid-major. Tony Bennett’s team played in a relatively strong conference, and it dominated. Virginia finished 16-2 in the ACC, and when that wasn’t enough for conference writers to show any respect, it went out and won the conference tournament without breaking much of a sweat. The advanced stats show that the Cavs are the fifth-best defensive team in the country, and 20th on offense, a combination that puts them at no. 4 in Ken Pomeroy’s rankings. This is not a fluke. Virginia is legitimately strong, and the lack of respect is puzzling. Here are four theories about why that doubt exists, and why it shouldn’t.

Years of watching Wisconsin disappoint in the tournament has conditioned us to be suspicious of teams that play a plodding, seemingly defensive game. But anyone who has actually watched Virginia play this season knows that we’re not dealing with a Bo Ryan squad that could stumble into a fluke loss at any moment because it runs out of possessions. Bennett’s team is more like a boa constrictor, wrapping itself around the opponent and waiting for it to suffocate. Even in the opening round against Coastal Carolina, when the Cavs played one of their worst games since December because of nerves, it was only a matter of time before the system crushed the enemy. Virginia can blow teams out, but even when it doesn’t, it’s not a matter of hoping to triumph by small degrees; victory, for this team, seems inevitable.

Theory 2: Virginia had bad losses in November and December.

This is true, but largely irrelevant. The story about senior guard Joe Harris visiting Bennett on New Year’s Eve to discuss the team’s problems, and the transformation that ensued, is now well-documented. Whether you want to buy into that narrative, or just believe that guard Malcolm Brogdon needed to recover his game in order for the Cavs to excel, there’s no arguing that the current version of the team has no resemblance to the one that lost by 35 to Tennessee (which, by the way, isn’t quite the schlub the “Virginia is overrated!” crowd wanted them to be).

Fair warning: If Virginia manages to beat Michigan State, a lot of people on television are going to start sounding like your grandpa when they talk about this team. You may have heard already that there are no McDonald’s All Americans on the Cavs roster, or that none even made first-team all-ACC. That last fact, for the record, is simply a product of media ignorance in ACC country; there are people around here who understand advanced stats, but there are more who don’t, and the fact that Brogdon’s per-game numbers were lower only because Virginia has far fewer possessions with which to work is a subtlety that wasn’t appreciated. (The coaches weren’t so blind.) As for the perception that Virginia is some kind of plucky underdog, I find it amazing that it has persisted this long. Akil Mitchell is one of the toughest rebounders and defenders in college and Mike Tobey isn’t far behind, while Brogdon and Harris are natural scorers and London Perrantes had the best assist-to-turnover ratio in the ACC. Yes, the Cavaliers play an incredible team game, and yes, they have discipline and consistency in spades, but people miss the fact that they can be spectacular or they can beat you up depending on what the situation requires.

Theory 4: Michigan State is the real national title contender, and UVa got unlucky with the draw

I guess we’ll see on Friday night, won’t we? But the speed and faith with which everyone has bought into the Spartans, after a really poor February and early March, is something I find a little staggering. Yes, Tom Izzo has his players back, but Keith Appling still seems to be in pain, and even at full strength, do we really believe that a team needs only a couple of weeks to regain full form and be a national title contender? Are the losses from as little as three weeks ago really forgotten that quickly?

It’s possible I’ll look like an idiot when Friday comes along, and that all the pundits will be right. But I find it really hard to believe that a team as successful as Virginia, with talent and toughness and the ability to dishearten opponents until they inevitably give up the ghost, will lose to a team that’s just now hitting its stride. I’m not saying the Cavaliers can’t lose this year. What I am saying is that the team who finally gets them will have to overcome a force that’s far stronger than anyone seems to understand. All Virginia does is win, and if my guess is right, the winning will continue until the point where respect and reality converge.