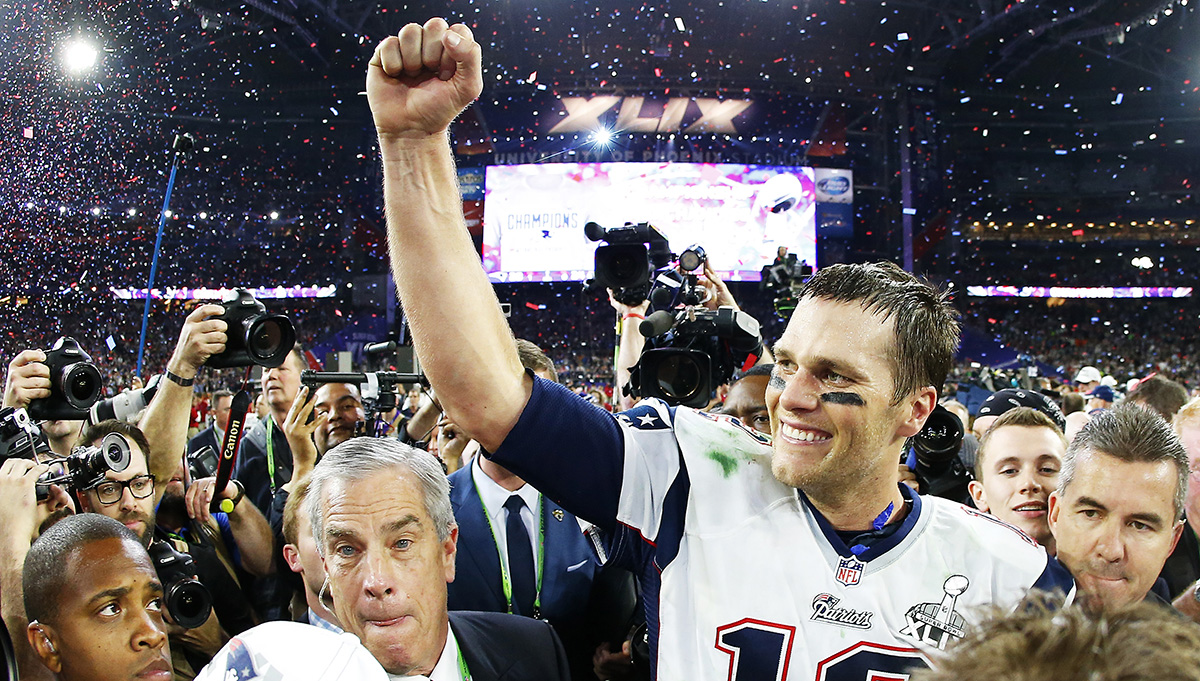 It was happening again. Almost seven years to the day after the catch that made David Tyree famous, the Patriots were back in Glendale, Arizona, clinging to a four-point lead, with barely more than a minute left in the Super Bowl. There was no helmet this time, but there was a cleat, Jermaine Kearse’s cleat, somehow corralling the ball back into his arms, as he lay flat on his back at the Patriots’ 5-yard line.

After the game, in his postgame press conference, Bill Belichick was asked if he’d ever seen a catch to rival the craziness of Kearse’s. “Yeah,” Belichick said, as dry as he could, “I’ve seen two of them.” The room laughed, and Belichick gave his version of a smile, but if not for a baffling decision and Malcolm Butler’s hands, the Cleat Corral joins the Helmet Catch and Mario Manningham’s snag along the sideline as the plays most responsible for keeping Belichick and Tom Brady from their first title in a decade. But the Seahawks did throw, and Butler did snatch the ball away, so there was Brady, in the Patriots locker room, posing in the selfies of passersby, holding his right hand sideways with four fingers out. “Put that four up,” Brady said to Robert Kraft’s grandson, Joey, as he held the next pose in a steady stream of them.

The difference between another empty trip to the Super Bowl and Brady matching jewelry with Joe Montana may have been one choice from Seahawks offensive coordinator Darrell Bevell, but even if Marshawn Lynch had pounded the ball in from the 1-yard line, Brady’s fourth quarter would remain the best frame of his postseason career. On 15 throws in the final 15 minutes, Brady threw two incompletions. Both came on the Patriots’ second-to-last drive — a perfectly thrown deep ball to Brandon LaFell that poor Tharold Simon managed to swat away and a rifled pass over the head of Julian Edelman in the end zone.

Brady airmailing his throw to Edelman came just one play after maybe his finest dart of the day. On third-and-8, after Edelman shook Bobby Wagner in the middle of the field, Brady bent a throw around dropping defensive tackle Demarcus Dobbs to take the Patriots inside the 10. It was the second time on that drive that Brady navigated the pocket and found Edelman in the middle of the field for a gain of more than 20 on third down. The first throw ended with Edelman taking a helmet-to-helmet shot from Kam Chancellor before staggering for a few more yards.

Asked afterward whether he’d received concussion tests after the hit, Edelman said players “aren’t allowed to discuss injuries.” Whether the proper protocol was taken — and if Edelman was allowed to play the rest of the game with a concussion — will rightly be a topic in the coming days, but Edelman being on the field proved crucial for New England. With the Seahawks doing all they could to slow Rob Gronkowski, the Patriots needed another receiver to exploit what little holes exist in the Seattle secondary. That was Edelman, who found creases in the middle of the field and also had his way with Simon — who was replacing the injured Jeremy Lane — when given the chance. 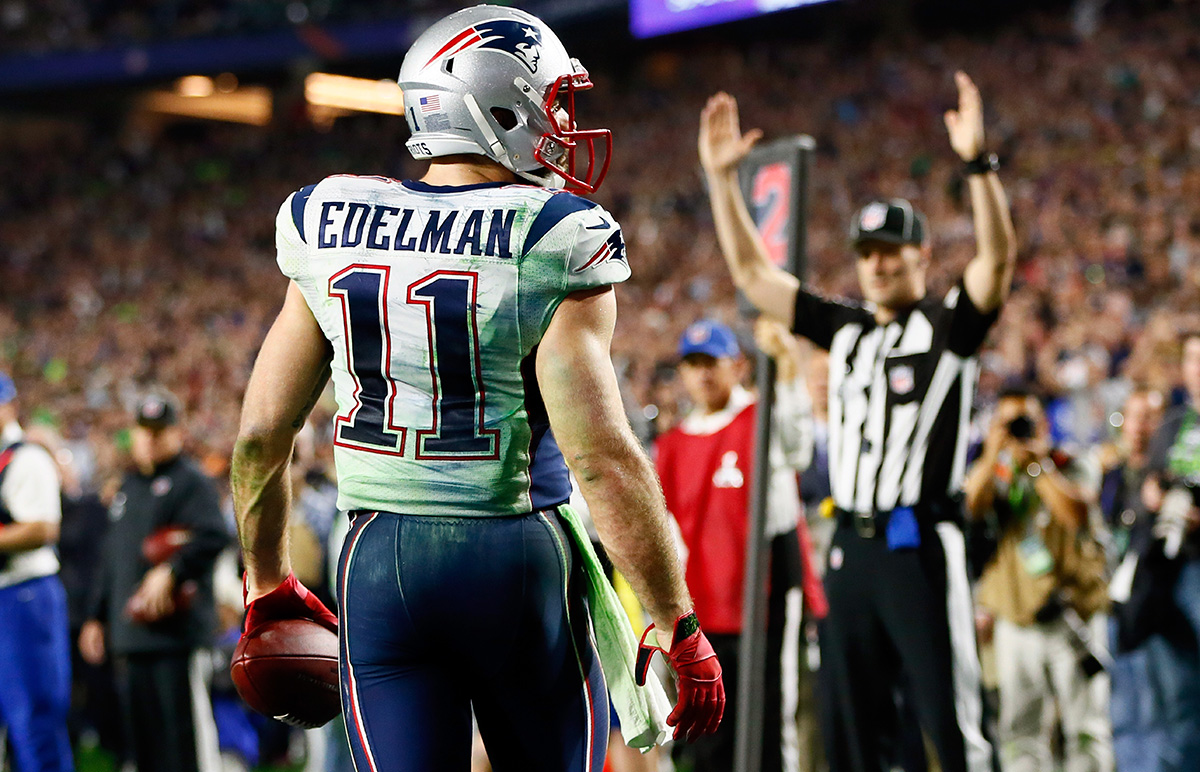 It was Simon who was tasked with covering Edelman on the Patriots’ final touchdown drive. The Seahawks were in man coverage at the goal line when Edelman spun Simon into the ground on a fake slant. Brady’s toss to the pylon was his easiest of the entire drive — a drive that saw Brady play nothing short of perfect. When the New England offense took the field with 6:25 left in the fourth, down 24-21, the contingent of Patriots fans in the west side of the stadium began to chant Brady’s name. They weren’t the only ones who sensed the size of the moment, for both the Patriots and their quarterback.

“Man, it was just … it was serious,” Brandon LaFell said about Brady’s late-game demeanor. “You could tell he knew it was crunch time, that we had to make a play, man. I saw that look in his eyes against Green Bay.”

LaFell admitted that against the Packers in Week 13, New England fell just short of the plays it needed. Yesterday, it got them. Shane Vereen hauled in a one-handed grab. Gronkowski beat K.J. Wright down the right sideline, just as he had for a 22-yard score in the first half. LaFell took New England to the 5. LeGarrette Blount pushed for two yards to take them inside. And finally, there was Edelman, shaking Simon in the end zone.

“For him to do that — 8-for-8 on the final drive, right? — that’s as big as a moment gets,” Patriots backup quarterback Jimmy Garoppolo said. “Obviously, he lives for that shit.”

More than once, it looked as if Brady’s few missteps would be enough to sink the Patriots’ chances. His interception to end New England’s trip to the red zone in the first quarter was a throw to no one in particular. When Brady threw his second, to Bobby Wagner — which allowed the Seahawks to push their lead to 10 and seemingly take control — New England appeared to be on its way to coming up short yet again.

It wasn’t an unfamiliar feeling. After another season as one of the best offenses in football, it’s easy to forget the obituaries for Brady’s career that were penned after New England’s loss in Kansas City in Week 4. The Patriots looked like a mess, and Brady looked like he had finally come to the end. But when he was asked after the Super Bowl about when he knew his team was capable of a finish like this, the Chiefs loss is where Belichick went. “We weren’t having a good day, but we kept fighting,” Belichick said. “We showed a lot of toughness and a lot of fight. We didn’t have good results, but, to me, if there was ever a time to not compete as hard, that would’ve been it.”

They couldn’t have been more disparate images. Four months after Brady’s supposed final days, when he was sitting alone on an empty bench in Kansas City, he stood with two fists raised in the air as an encroachment penalty put the Seahawks away for good. Brady’s final statement of a season in which he was declared dead was 328 yards against one of the best pass defenses the league has ever seen. Other quarterbacks have salted away legacies with late-career Super Bowls, but while some have done it as the caretakers of an otherwise championship roster, Brady was at the center of his fourth title, a full 13 years after winning his first.

Shane Vereen was among the final Patriots to find his way to the locker room. Brady had just finished with his parade of photo seekers when Vereen started to undress. But before he did, he pointed toward his quarterback.

Reaching into his locker, barely audible from where Vereen stood, Brady managed two words, almost to himself.