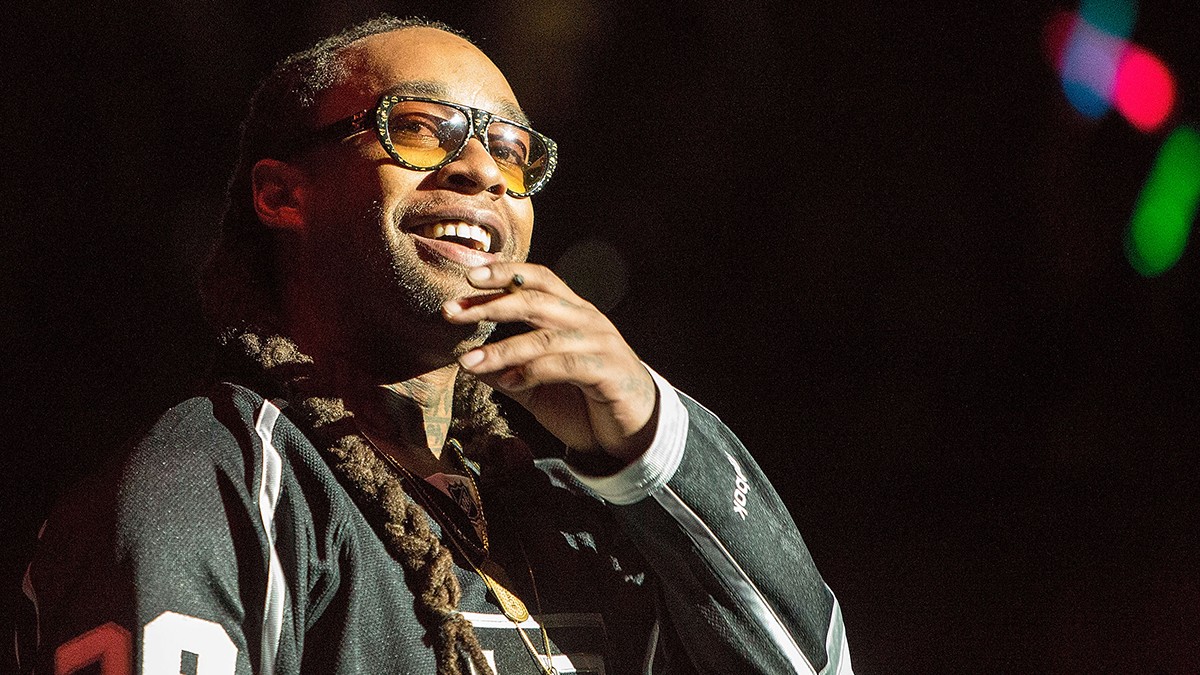 Earlier this month, Ty Dolla $ign was revealed to be a part of XXL’s “Freshman Class” issue, the magazine’s annual showcase of who’s next in rap. Except Ty isn’t a rapper. He was one of two traditional R&B artists featured in the class. It was a small change in nomenclature to keep the rather old-fashioned method of generating publicity fresh.

Per custom, cameras capture the freshmen, one by one, reciting a one-minute “freestyle” alone in a dark room. The magazine selected two singers but wasn’t able to make the promotional platform amenable to their skill sets. As a result, there is a video on the Internet of Ty Dolla $ign “rapping” for one minute. To make matters worse, his “freestyle” is actually a verse he’d previously dropped on the remix of K Camp’s “Money Baby,” a huge hit in Atlanta. XXL Freshman Class freestyles are about as staged as professional wrestling. That Ty$ so flagrantly broke kayfabe is charming in its own way. But charm alone couldn’t prevent the train wreck.

Ty$ stumbles out of the gate. Though he has violated the freestyle code of ethics, he is at least courteous enough to make it seem like what comes out of his mouth isn’t months old. He vacillates between plainspoken delivery and the original melody, but never commits, as to preserve the facade of spontaneity. Unfortunately, the freestyle is an uncomfortable mess, but it’s not entirely his fault. XXL took an addled lion and threw it in the middle of the ocean — lord knows it can’t swim. “I’m definitely a singer,” he told HipHopWired, laughing. “I don’t wanna fucking battle Kendrick or none of them n—–, you feel me?”

Ty$, 29, spent years biding his time in the shadows, writing for other artists. He wasn’t going to turn down this kind of attention. Compared to some of the other artists featured in the freshman issue, though, he wasn’t exactly starved for it. Of the 12 featured on the cover, Ty$ is the only one with a song that has landed in the top third of the Billboard Hot 100 — technically, he’s done it twice this year. His breakthrough hit, “Paranoid,” which was first released as a part of last summer’s Beach House 2 mixtape and rereleased in this year’s Beach House EP, peaked at no. 29 on the Billboard charts. His other hit now belongs to someone else. Ty$ wrote “Loyal,” Chris Brown’s biggest smash in three years. Ty$ originally wrote the song for himself, and a quick spin of “Loyal” reveals stylistic markers that are undeniably Ty$: the terse cadence; the flourishes few and far between; the content, a case study in infidelity that is the core of Ty$’s discography. Brown made it a hit, but did so by adhering to a framework that is Dolla $ign through and through. The formula works. Unlikely as it may be, Ty$ might be the next great pop engineer.

It is best to consider Ty$ in the context of pop music, where effortlessness is a construct and not necessarily a reality (unless you get lucky). He was never going to look good projecting spontaneously in a dark room by himself. Environment is important. The studio is there to isolate variables, to eliminate impurities. That’s where Ty$’s merits make sense.

Think of what must have gone into “Paranoid,” one of 2014’s most unlikely hits. He moves from playful to menacing, with the same deadpan delivery. His words are vacuous, but there’s something deeper in play — it’s how they’re packaged. Ty$’s music exists in the decontextualized landscape where retweets are not endorsements, where the tension between what is being said and what is being heard amplifies, instead of diminishes, a song’s immediacy. The songs themselves become ways to navigate the tension, while also being the source of it. Let the confusion come through, and then let the confusion correct itself, a great mind once wrote. Let the phenomena play.

Ty$ is a musician’s son, and he takes that to heart. His father, Tyrone Griffin Sr., is a multi-instrumentalist who toured the world as a member of the funk band Lakeside. Griffin Sr., as a session musician and sound engineer, was exposed to different styles and genres of music, and by proxy, so was Ty$. As part of the XXL 2014 Freshman Class promo circuit, Ty$ held an AMA on Reddit. He was asked to name his top five musicians, dead or alive. The first name on his list? Jaco Pastorius, the bass god. Strange, right? Maybe, maybe not. Pastorius’s bass lorded over Joni Mitchell’s 1976 album Hejira, which was recorded at the now-defunct A&M Studios in Hollywood, where Griffin Sr. worked as a recording engineer. Bass is Ty$’s favorite instrument, and it’s intriguing to imagine a young Tyrone Griffin Jr. hearing his father’s copy of the recording, enraptured by the moans and bellows from Pastorius’s fretless bass on Mitchell’s “Refuge of the Roads.” More intriguing is imagining him revisiting the song years later, maybe finding a sort of kinship with Mitchell’s opening lines:

I met a friend of spirit

And I sat before his sanity

I was holding back from crying

He saw my complications

And he mirrored me back simplified

Mitchell’s “friend of spirit” was Chögyam Trungpa Rinpoche, a Tibetan Buddhist lama who, depending on whom you ask, was one of the most positively influential figures to bring Buddhism to the West, or the worst thing that happened to Western Buddhism, or both. He drank heavily (and died of complications directly related to his alcoholism) and had sexual relations with a number of his students. His unconventional methods of spiritual investigation fall in line with a Tibetan Buddhist tradition known as “crazy wisdom,” which is exactly what is sounds like. Students of Trungpa Rinpoche were once told by a Tibetan Buddhist master, “You shouldn’t imitate or judge the behavior of your teacher, Chögyam Trungpa Rinpoche, unless you can imitate his mind.” Do as I say, not as I do. Rinpoche himself discouraged his students from mimicking his behavior, understanding that the same activities that allowed Rinpoche to free himself from ego — he was prone to fits of anger directed toward students who treated him with any level of deified reverence — were the same poisons that reinforced self-absorption.

There is plenty of ego in Ty$’s Beach House series, but there are also moments of meditation and introspection through the voices of others. The most poignant can be heard in the coda of “Wood and Leather,” off this year’s Beach House EP. As the song about Ty$ being able to take women from their partners at will comes to a close, a phone recording emerges through a cloud of violin. It’s Ty$’s younger brother, Big TC, with a sermon lamenting the premise of using “you only live once” as an all-encompassing justification. Big TC, who also appears on L.A. rapper YG’s debut album in the mesmerizing “Thank God (Interlude),” recorded the message from jail, where he faces life in prison on a murder charge. Ty$’s forthcoming debut album is titled Free TC, a nod to his brother, who he believes is innocent. Ty$’s songs are so entrenched in reckless hedonism that it seems as though that, in itself, is the end game. The incorporation of spoken word is a North Star for an artist who so often meanders south. “I feel like I’m only going to grow,” Ty$ told Noisey in a 2013 interview. “I’m not gonna stay the same forever, you know?” The endgame is “being a man” — getting married, setting a good example for others, and “being the shit.” There’s no blueprint. He’s just going to have to let the confusion and the contradictions he’s built uncoil themselves. He’s just going to have to let the phenomena play, like Rinpoche said.

Ty$ is no bodhisattva, but who knows? He’s shown patience, and he’s shown selflessness. Maybe there’s something for him in the next life, or maybe there was a missed opportunity somewhere in this one. In the mid-aughts, he was half of a duo called Ty and Kory, which had ties to Buddah Brown Entertainment, a now-defunct record label backed by stars like Justin Timberlake and will.i.am. If you couldn’t tell from the name (or the retro Flash site), it’s kinda-sorta inspired by Asian and Eastern Buddhist imagery. A deal never materialized.

After years of being the faceless, soulful entity hanging in the periphery on tracks by artists like Black Milk and the Sa-Ra collective, Ty$ caught a break in 2010. He had himself a hit. Then he gave it away. The song was “Toot It and Boot It,” and it went to a young artist signed to Def Jam named YG. Ty$’s fingerprints were all over the release — he produced the song and sang the catchy, stupid hook. Today, the song is looked upon with disdain from both artists, but it was their watershed moment, together. Earlier this month, performing at the Observatory in Santa Ana, California, Ty$ reduced “Toot It and Boot It” to seconds — just the hook, just enough for everyone to get it out of their system and move on.

It’s been four years since “Toot It and Boot It” was released. The landscape has changed in L.A. Kendrick Lamar looms large, the Arron Afflalo to follow. Ty$ has a top-10 song in the Billboard Hot R&B/Hip-Hop charts. YG has gone from flash in the pan to toast of the town. They play medleys with songs from his excellent debut album, My Krazy Life, at Clippers games. The album has reached anthemic heights. Every time a YG song dropped between sets — and it happened very, very often — the Observatory crowd lost its mind. YG was the only presence that elicited a stronger reaction than Ty$ himself, and he wasn’t even there. The show was as much a celebration of Los Angeles’s rejuvenation as a hip-hop power as it was of Ty$’s recent success. With a mob of rising artists, friends, and family behind him, Ty$ closed the show with a decree: “Make some noise for the new L.A.”

It was a quarter to 1 a.m. and my friend and I were on the freeway heading back home from the concert. The “Metta World Show” hour on Power 106, hosted by former Laker and current radio personality Metta World Peace, was on. Humming in the background, waiting to be unleashed, was DJ Mustard’s “Paranoid” beat, bouncing ad infinitum. MWP was talking about the Billboard Music Awards, how he’d fix it (he’d go on stage and perform), and how Michael Jackson changed the world. He cut himself off after asking the audience to call in with who they think is the next King of Pop. Because it’s time. “Let’s give L.A. what they want.” And so, for the sixth time that day, hundred-odd thousandth time since last year, we listened to Ty Dolla $ign’s “Paranoid.” To the west of the 605 were beady lights that faintly made out L.A.’s skyline; to the east was the Rose Hills cemetery, its bright red letters glowing atop a hill in the dark. But the song isn’t dead yet. We were heading west.