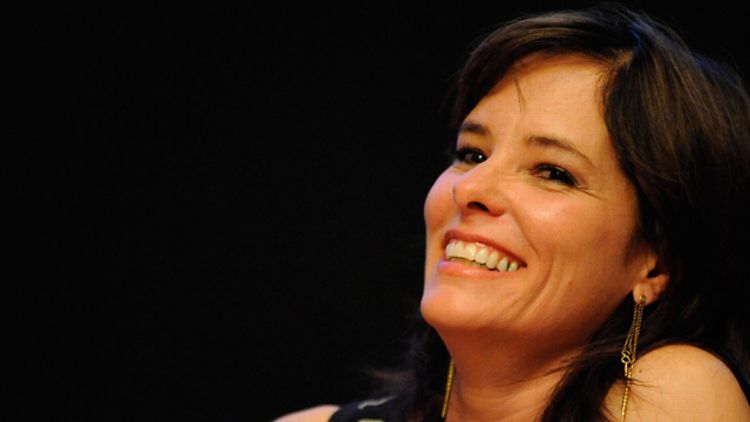 Last night’s breathtaking episode of Louie also served as a remarkable change of pace. Not only did it pick up the events of last week’s wonderful “Daddy’s Girlfriend” — a surprising blast of continuity for the famously shaggy show — it also provided a brilliant showcase for the talents of Parker Posey, the onetime “Queen of the Indies.” As Liz (née Tape Recorder), Louis C.K.’s bookish, possibly bananas date, Posey was a revelation, leading our hero like a schlubby Dante through the vibrant underworld that is New York City.

Alternately tender and terrifying, “Daddy’s Girlfriend Part 2” was both a creative breakthrough for an already excellent show and a long-needed turn in the spotlight for Posey, one of the most gifted actors alive at revealing the brittle cracks hiding behind every smile. Speaking to me via cell phone from Los Angeles, where the longtime Manhattanite was taking meetings and “dodging grass cutters,” Posey was funny, engaging, and breathless. When I ended the call by complimenting her again on her performance, she replied like the working actor she is. “Thank you,” she laughed. “Hopefully someone will see it. And give me a job.”

Were you familiar with Louie before you were cast?

Not really. I had seen one clip, the part on the subway. And then a friend showed me a clip of him and Pamela Adlon and that was it. But three weeks later I took part in a benefit reading for the school his kids attend. It was me, Louie, Nathan Lane, Marisa Tomei, Mario Cantone, and this was right in the days after he released his comedy DVD on the Internet, so he was dealing with all of that. You know. Paying people.

There must have been a lot of that!

We went out after the reading, and I realized: His show is a revelation. It’s like Woody Allen and John Cassavetes combined. It’s exactly what we’ve been missing in entertainment, not just in television but in film too. We’ve gone so far away from human behavior. It’s sad that only a few people these days get a chance to really create their own material and not have anyone mess with it. And I told him: Good for FX for not messing with you!

I had no idea. So the part really came from the two of you meeting?

Well, the first night he said, “I’d love for you to come on the show and play my therapist.” I was like, that sounds great! I e-mailed him the next day when I was eating dinner and he ran by and we talked for a few hours more. He said, “I know what I’m going to do with you. Now I know!” I think he had had this idea of someone like this, someone like Liz. I think it was based on a couple of people, some stories he’d heard. But I was the missing piece for the idea. Then it just came really easily for him.

Did you know it was going to be a two-part episode?

No! It just ended up taking up an entire episode and some of another one. He was like, “I don’t know what to do about this but I guess it’s what it’s supposed to be!” It’s something you rarely see filmed, this archetypal New York meeting that turns into a story. It’s so much a part of the mythology of the city, I think. The woman who takes you on a little journey and totally unravels.

About that unraveling: I wanted to ask you about the moment in the bar when she’s refused a drink. That seemed key to everything that came after. It added a level of reality and pathos to what otherwise could have come across as a more typical Manic Pixie Dream Girl enchanting our protagonist.

My approach was just to play someone who is changing and also looking. You know? I think these terms like “manic” and “bipolar” come way too easily to people. It simplifies it. Even though she might appear manic when she can’t get a drink, it’s really that she’s excited and can’t contain herself. She wants to look, she wants to find, she wants to show. There’s a loneliness to that. But I really love those kinds of people. I get them right away. Being denied that drink … I think it can be interpreted another way. What about the idea that the bartender has mistaken her for someone else?

It seems like Louis prefers to keep that kind of looseness and ambiguity in his stories. Does that come from the vibe on set? Is it as fluid and collaborative as it appears?

It’s a little bit loose, but really it’s like independent movies, where there’s a feeling of being rushed and having limits in terms of space and comfort and all that stuff. Louie only works three days a week; he spends the rest of the time with his kids. But it certainly had a vibe, like “OK! Yeah! Go!” Which I know is very Cassavetes. Everyone just hanging out, sitting on the floor, watching YouTube videos. We shot it in Brooklyn, on that roof, all over the Lower East Side, just walking around. We shot in front of Soho Billiards. I brought my yoga mat and took a nap on a pool table.

I found your performance and the chemistry between the two of you totally remarkable because there was room for both palpable joy and real risk and menace. Those are polar opposite emotions but they’re equally rare on television.

Yeah! Right? It’s an edge, an edge I think all people who are funny have. But you’ve heard this.

Comedy is a defense against pain. It’s something I know from the Christopher Guest movies. You can veer so close to poignancy, show something really sad, and at the same time have it be funny. There are actors like Catherine O’Hara, you can see how they veer. They veer really easily into something dark and sad. When you can do what you want with comedy like she can or like Louie, you can claim that edge, then play with it however you want. He knew he had to do something very different this season in order to maintain the audience. That was very much on his mind, how to transform the comedy yet again. But I think people are liking this serious side. It’s unexpected, huh?

Definitely, but also earned. There’s a sadness and vulnerability that’s been there from the beginning. But speaking of the opposite of sadness, I have to ask about the amazing scene in Russ & Daughters —

It’s so good! Do you go there?

It’s the best. But that scene is so unexpected and beautiful. It’s close to Tom Jones in its sensuality!

Oh, that was fun to do. And of course we got to eat dinner, so that was good. But — she’s feeding him! That’s the thing. She’s feeding him. He’s starving and empty. She reaches out and goes No! I’m gonna feed you with this, with what’s good for you. Good for him for writing that. The woman that’s nurturing.

And again it’s so New York. This totally surprising moment of chaos and beauty.

The spontaneity, right? That’s what people do when they walk outside; they’re open and looking for experience. It’s why people move to New York City: They want to look in windows, not at their phones. And Liz had been so close to dying and time’s running out. So there’s trauma but also a sense of emergence. It’s great.

Do you have any sense if Liz might return one day?

A few weeks ago, I saw you speak at the Brooklyn Academy of Music after a screening of one of my favorite films, Kicking and Screaming. That movie is among the reasons why you’re referred to as the “Queen of the Indies.” But afterwards you spoke very eloquently about the lack of opportunities there are for smaller movies these days. Do you think TV has picked up any of that creative slack?

It could pick up even more slack! Louis is the only one getting the opportunity to do it, really. And Lena Dunham — she’s a great voice. But the indie film scene got taken over by big budgets and big paychecks and big stars. And everyone got paid more, right? So then it lost its vibe. You have to have a certain amount of limitations, I think, to make art and to make something that can be alive on film. Money can get in the way of that. Louis is working within those confines and it shows.

I think people are starving for his kind of attention to detail. Not stereotypes and robot people. No one is putting anyone on a witness stand and talking about this dead person in their refrigerator, you know?

You turn on TV now and you hear that on nearly every channel!

The other thing you said at that discussion that really stuck with me was how when you received the script of Kicking and Screaming you wondered why a woman couldn’t be one of the friends with all the good lines.

I was fresh out of Party Girl and Dazed and Confused, experiences where I was really able to bring a lot of myself. So I asked [director] Noah [Baumbach] — I could see he was a talent — can’t you just change one of these guys? Or can’t they have a girlfriend who’s just, like, a friend of theirs? Because they get all the funny lines! I think it just didn’t occur to him. I have a twin brother, so I was around guys like a sister. It was comfortable to me. It’s weird, though, that it’s still separate. It gets me down. What a bummer.

How do you mean?

That men and women can’t be equally funny in the same movie. It’s always the girl comedy and the guy comedy. It bums me out. You’d think there’d be a progression, from James L. Brooks and Nora Ephron into more subtle humor and behavior and psychology. All these interesting things people can learn about themselves by watching talented writers comment intelligently on someone else’s emotional life. How they love. How they hate. You know? I think you’re seeing that more on television now, in shows like Louie that have the freedom to express it.

Or on the Internet?

Yes! People can make their own movies and their own rules for very little money. I don’t know. Maybe there’s just an oversaturation with all these channels and all this noise. But, wait, I’m talking to ESPN! It’s sports! The sound of a golf game is very different than the sound of a football game.

Can I ask you this? Why isn’t there more Ping-Pong on television?

I don’t know. Maybe before HD it was just too fast to keep up with the action?

Yeah! And now the balls are flying right through the screen. I mean, what’s next? All these rackets and bats have landed in my living room. It’s too much!

Finally, I have to ask: How did Louis look in that dress?

Oh my god. He looked so good. It made me blush. I think it made everyone blush!