Justified Season 4 Finale: Haunted by the ‘Ghosts’ of Harlan County 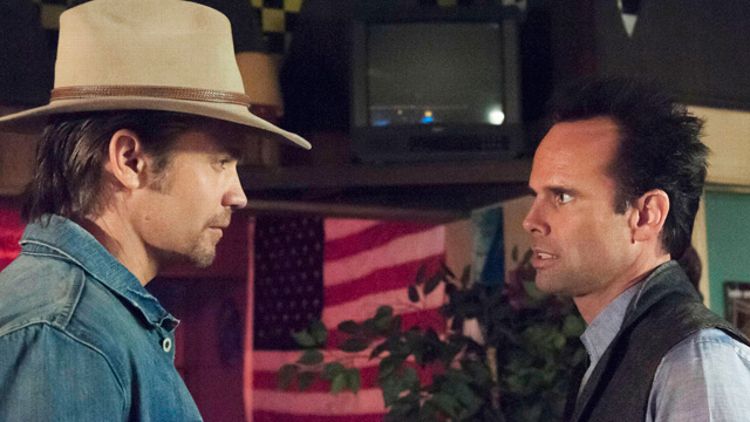 In the end, it all comes down to choices.

Ava chose to shoot Delroy and, in the moment, it seemed the right thing to do. But over time, that decision has caught up with her, and she’s run out of options. She’s hauled off to jail shortly before the end of “Ghosts,” and it seems unlikely she’ll be getting out anytime soon. Similarly, Raylan chooses to go after Nicky Augustine, though he at least follows the letter, if not the spirit, of the law when it comes to what Art told him to do. To catch up to Augustine, he needs Boyd, and because he takes Boyd, Boyd’s not present when Ava’s arrested, meaning the prospect of Boyd behind bars — one Raylan has toyed with from time to time — won’t come to fruition just yet. For Boyd’s part, he chose to make a play to expand his business, only to be beaten down at every turn, finally reduced to playing lapdog to Wynn Duffy, just as he hoped not to do. And Augustine chose to disregard Raylan’s offer as a bluff, then got himself killed for it because he didn’t understand just what the marshal was up to.

More than any other season of the show, the fourth season of Justified has been defined by those decisions, those split-second moments when a life could pivot one way or another, based on a binary choice. You can barrel through door A, or sneak through door B, but you can’t do both. Even Drew Thompson — a man who very nearly found a way to do just that — found his old crimes catching up with him eventually, because one of his accomplices hid some incriminating evidence in a wall. As Raylan patches over the hole left by those copper thieves back in the season premiere, then heads outside to look over another freshly filled hole — that of the grave holding his father’s body — it’s not hard to look at the episode title and imagine how all of these characters are haunted, less by the people they’ve known than by the people they were, and all the alternate paths they never took.

“Ghosts” is a surprisingly muted finale, but it’s the right choice for this season, which built up a good head of steam, let most of it blow off in episode 11, then spent the last two episodes picking up the pieces. If “Decoy” was a new high-water mark for the show, that’s because it’s so immediately visceral and fun to watch. “Peace of Mind” and “Ghosts,” on the other hand, take the other tack, trading in the action-movie plotting and balls-out excitement of “Decoy” for thematic contemplation and brooding emotionalism. I’d stick these three episodes of TV up against any episodes produced by any show in the medium’s history — they’re that good. And what’s most fascinating about them is the way that the air just slowly leaks out of everything. “Decoy” is all hot air and bluster. “Peace of Mind” is what happens when everybody starts to cool down. And “Ghosts” comes only after the party’s over, after the guests have left and the mess has yet to be cleaned up. It’s the sigh of resignation at another long night ended.

After dominating so much of the season, Drew sits this episode out, which is too bad. It might have been nice to get a small moment with the character, who, as played by Jim Beaver, turned into the season’s unlikely soul. But, really, his part of the story’s over. Now that he’s in custody, Theo Tonin has taken off for Tunisia, which has no extradition with the U.S., leaving son Sammy Tonin in charge. There’s bad blood between Sammy and Augustine, so Augustine plans to kill him. What Augustine doesn’t know as he tells Raylan this is that Sammy’s right outside at the airstrip, and Raylan goes to tell the younger Tonin that Augustine’s plotting his death. Cue Raylan walking away from several mobsters pumping bullets into the limousine holding Augustine, in a scene that comes as close to a truly dark moment for the lawman as we’ve had all season. At the same time, it’s almost a moment of triumph: Raylan often tries to shoot his way out of situations, but he’s just as good at thinking his way out of them, and here’s an occasion where he did just that. (His kiss-off line to Augustine is vintage Raylan, too. Told that his threats saying Augustine would die in that limo were just “cop talk,” Raylan says, “You’re still in the limo.” Minutes later, the bullets start flying into said limo.)

While Raylan is figuring out a way to kill Augustine without actually killing him and losing his job as a marshal, Boyd is searching for the one last play that will keep him and Ava from going to jail for the murder of Delroy. At first, they’re simply going to get Delroy’s body out of the mine shaft they tossed it into, but nothing’s that easy on Justified, as the police have already retrieved said body. The next plan involves Boyd utilizing his connections within the police and Clover Hill to swap Delroy’s corpse with that of someone who died from an Oxy overdose. When the coroner inspects the body and finds the Oxy to be the cause of death, rather than a gunshot, Ellen May’s story will start to fall apart, and Ava won’t go to jail. Yet this plan, too, falls apart, as the cop just “happens upon” Ava trying to dispose of Delroy’s remains. Boyd pushed too far, too quickly, and it came back to bite not him but the woman he loves. He’s forced to give in to Wynn on running Harlan’s heroin trade, to break into the house he once dreamt of buying so that he and his future wife might one day have grandchildren for whom the Crowder name was a boon, not a stigma. He stares out into the backyard, at a hummingbird flitting about, and he must feel the sheer weight of everything that’s been taken from him in so short a time.

Justified is almost always at its best when it’s giving both Boyd and Raylan something to do, yet keeping them at arm’s length from one another. As I wrote earlier this season, there’s a natural inclination to want the two characters to team up, to want them to face off against some bigger threat, yet the show has mostly skewed away from this, except in a few moments. This approach gives the times when Raylan and Boyd finally meet the proper weight, and the scenes they shared here have the feeling of long, weary history, of two men who don’t even realize just how much they’re inadvertently helping each other out. No, where the show succeeds is when the two are working at the same problem from different angles, or facing down the same themes on opposite sides. What made “Ghosts” work so well is what made Season 4 work, in a nutshell: Both Boyd and Raylan were intent on securing their legacies, only Boyd found his had turned to mud and Raylan realized how little of a legacy he even had. His father’s in the dirt, and though he’s riding high professionally, he’s nowhere near renewing his relationship with Winona. He’s going to be a father himself, but he hasn’t stopped long enough to think about what that might mean.

In the end, those choices made and not made, those roads taken and not taken, are the true ghosts that haunt these characters and Justified itself. While Season 4 may not have had a performance as immediately electrifying as Margo Martindale’s work as Mags Bennett in the show’s second season or anything as ambitious plot-wise as last season’s cavalcade of villains, it ended up being surprisingly deep and thematically rich, all without seeming to break a sweat. And so much of that richness came from the way the series used its increasingly tangled backstory and Harlan’s bloody history to suggest that holes in walls might be smoothed over, but whatever was hidden behind them won’t go away so easily.

Or, put another way, around the episode’s midpoint, Boyd is digging up the body of the Oxy addict with Jimmy from a secluded little potter’s field. Jimmy seems nervous, perhaps frightened of being so very near to the dead. Yet Boyd, as he always does, turns philosophical. This is where everyone will end up, no matter who they are or what they’ve done in life. Best, then, to make the most of whatever this one spin on planet Earth gives you. At the time, he seems almost jubilant, and why wouldn’t he feel that way? This is Boyd Crowder, the man whose schemes inevitably work out, just as surely as Raylan will be the one with the fastest gun. Yet his scheming fails, while Raylan succeeds only because he finds a way to get what he wants without pulling his gun.

And even so, neither man seems particularly happy as the episode ends, neither Boyd who failed utterly or Raylan who succeeded (but still had to serve a month’s suspension with only his memories to keep him company). The longer they live, the more ghosts they accumulate, the more they seem to constantly drag that weight behind them. This time, as “You’ll Never Leave Harlan Alive” rises on the soundtrack, it’s quiet, nearly a whisper, a ghost as surely as anything else, as these two men one day will be.

Todd VanDerWerff is the TV editor of The A.V. Club. His writing has always appeared in The Los Angeles Times and Hitfix.