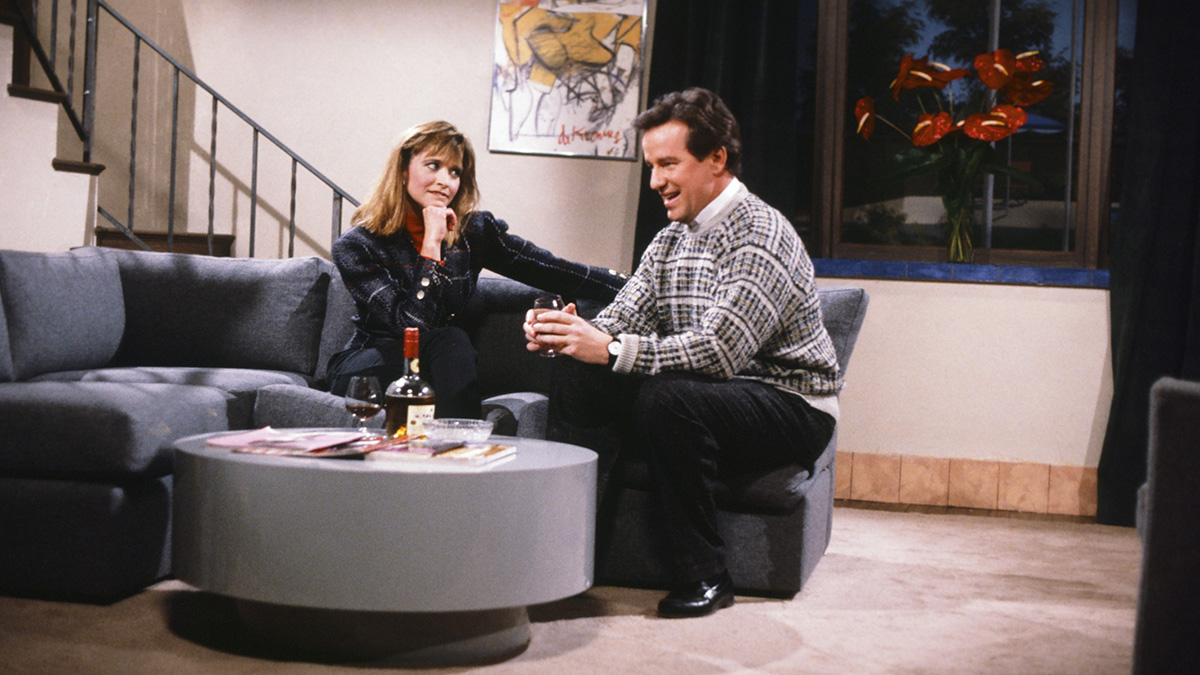 On July 14, 1998, not long after her good friend and former Saturday Night Live costar Phil Hartman was killed at his home in the Los Angeles neighborhood of Encino, Jan Hooks spoke at a tribute event for Hartman at the Paramount Theatre in Hollywood. Calling him “Sandy,” a nickname she’d given to Hartman more than a decade before based on the color of his hair, Jan fought back tears while offering heartfelt thoughts about the man, his work, their onstage relationship, and life in general. Her speech was recorded that night, and it’s published here with the permission of her brother Tom Hooks.

After Hartman died, SNL re-aired a short 1987 film he’d appeared in with Jan titled Love Is a Dream. Devoid of jokes, the musical production — described by one writer as “a strange, sad, beautiful piece of retro-romanticism” — was directed by Tom Schiller and shot by cinematographer Neal Marshad. Little did Jan know that Dream would one day be rebroadcast yet again and shared endlessly online to mark her own premature death.

How I wish I could have one more dance with you. It was such an honor to have worked so closely with you. I had the great privilege of being in your make-believe life in so many incarnations. I was Hillary to your Bill, Ivana to your Donald, even Beauty to your Beast. Today, in many ways, I feel like your make-believe widow.

Performing live was never easy for me. I was constantly overcome by doubt and fear. You knew this, yet you never commented on it. You simply offered your hand and allowed me to hang on. Thank you for being my rock. Thank you for giving me confidence and security under the most adverse performing conditions. Thank you for setting such a fine example with your own gentle courage. All of your work was based in reality. You never winked at the audience, as if to say, ‘Do you see how funny I’m being?’ You approached every character with all the intensity and integrity of Olivier playing Hamlet. And no role was too small to not be infused with every ounce of your precious talent.

For a while I felt that you must have been just as shocked by your death as we were. How could you not be? So abrupt. So violent. So unexpected. And then I remembered the way you handled last-minute changes on Saturday Night Live. At 11 p.m. the entire show would sometimes be turned upside down. The result would be people scurrying around, throwing new pages at you, ripping off your costume, clamping a wig on your head. You were never unhinged by any of that. You were always so serene. I find great comfort in remembering your ease in handling change. And because death is merely change, I have no doubt that wherever you are, you are at peace.

We who survive here are left with the difficult business of trying to make sense of this thing. Of missing you so much. Of worrying about your children. And of forgiving Brynn, which is ultimately what we must all do. When I think of you, I think of my own youth and I realize the time has come to release it just as certainly as I must let you go. The concept of middle age sure is scary, but I hope to move gracefully through change just like you did. As I go on, you remain very much alive in my heart. I will continue to call on you and be inspired by your sweet and solid strength. And then someday, when it’s my turn to cross over, I just hope that my first dance will be with you.

Mike Thomas (@MikeTScribe) spent more than 14 years as an arts and entertainment staff writer at the Chicago Sun-Times. His work has appeared in Smithsonian, Esquire, and Salon, among other publications. He is the author of two books: You Might Remember Me: The Life and Times of Phil Hartman and The Second City Unscripted: Revolution and Revelation at the World-Famous Comedy Theater.