Days Between Wheelhouses: Growing and Getting F​-​-​-ed Up in Public With Miley Cyrus and Her ‘Dead Petz’ 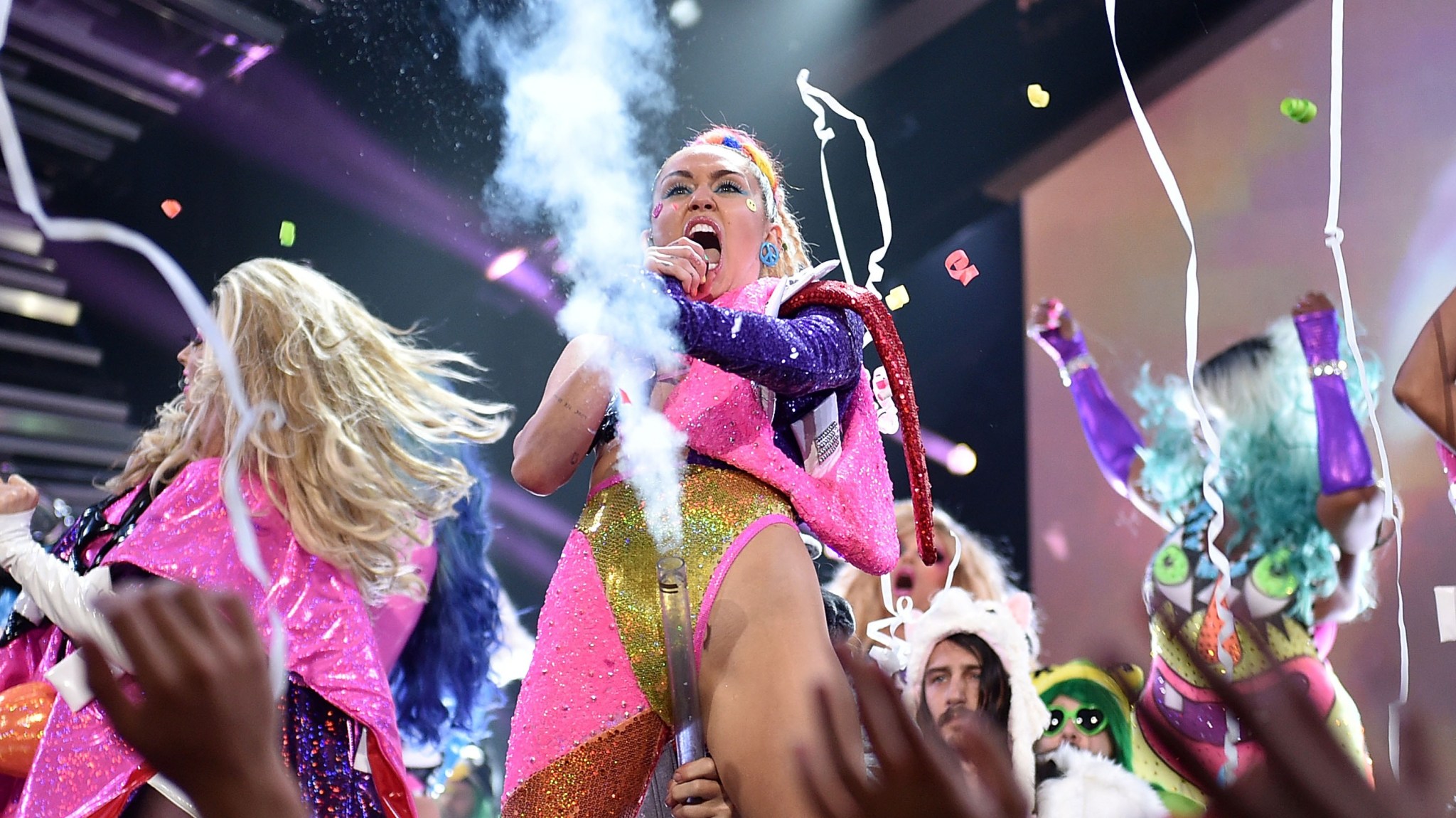 If we can say for the sake of trolling conversation that Bangerz was Miley’s Achtung Baby (a controlled demolition, post-earnest but not post-anthem, a decisive break with the past whose highlights proved seamlessly compatible with preexisting set lists), then Miley Cyrus and Her Dead Petz is her Zooropa, in that it’s synthy, fluid, experimental, and post-post-earnest, and I expect to find myself defending it at social gatherings for the rest of eternity. Cyrus couldn’t have picked a better moment to drop this one — on Sunday night, just in time to change the subject after she hosted this year’s Video Music Awards telecast right into the ground. “Cruise director for dumb millennial-targeted awards show” is an assignment that seemed right up Miley’s alley, but it turned out to be a several days’ drive over rough terrain away from her alley. She addressed Snoop Dogg as “Mammy,” inexplicably; Nicki Minaj called her a bitch, explicably. There is nothing less cool than a famous person trying to remain cool while hosting an awards show; this is Franco’s Paradox, and anyone who ignores it is doomed. Like the Oscars, the VMAs are part of modern celebrity culture, and modern celebrity culture is ultimately a narrow and unforgiving canvas for an artist to paint on — even one who’s lately reinvented herself as a stoner goofball determined to take everything unseriously.

Dead Petz is a glimpse of what Miley might become if she opted out of the pop-stardom sweepstakes entirely. It’s the loopy, indulgent (23 songs!) masterpiece she’s been gearing up to make since she tossed aside her Hannah Montana wigs to follow the road of wisdom through the palace of Ke$ha. Bangerz MVP Mike Will Made It and Wayne Coyne of the Flaming Lips — cosponsors of Miley’s mini-reinventions as trap queen and purveyor of sparkly Lisa Frank psychedelia, respectively — are all over the record, but Petz also feels like it’s Miley’s in ways that her executive-producer credit doesn’t quite convey. Coyne has talked to Rolling Stone about Cyrus EQ’ing vocals at a desk in her tiny home studio; even the space-rock epics have a homemade diary-dump quality that’s new. The drug references (first line of first song: “Yeah, I smoke pot”) open the door to other kinds of frank discussion, the same way they do on Kacey Musgraves’s records, or Future’s; the song that feels the most like it could have made Bangerz II is “BB Talk,” on which our heroine confesses to her new boyfriend that his gushy texts make her want to vomit. The whole project is a transmission from Cyrus’s satellite heart that really puts forward all of mid-to-late-2015 Miley’s best qualities: her wide-eyed enthusiasm for new sounds, her emotional openness, her dorky/assertive sex-positivity, the androgynous capacities of her husky contralto, and that she’s the only 22-year-old on earth who still cares about the Flaming Lips.

Also, she’s really not kidding about the dead-petz thing. “The Floyd Song (Sunrise)” — part of a five-song opening run that sounds particularly like a bunch of nugs from Coyne’s private gummy-skull hard drive of Yoshimi Battles the Pink Robots outtakes — is named for Floyd, Cyrus’s Alaskan Klee Kai, killed by coyotes in 2014 while Cyrus was away on tour. According to the New York Times, which I guess is your paper of record for Cyrus-related developments, Miley later communed with Floyd’s spirit during a session with a Chinese healer, an experience that helped inspire this album. This is not the crazy part; the crazy part is that “The Floyd Song” isn’t even the saddest Petz song in which Miley mourns the loss of an animal companion. That’d be the utterly bereft “Pablow the Blowfish,” which either despite or because it’s about exactly what you think it’s about is this record’s emotional summit. Back in May, Cyrus played “Pablow” at one of her “Backyard Sessions” concerts while dressed as a unicorn. If you’ve never seen it, please check it out, and let me know when you lose your ability to tough-guy your way through a video of Miley Cyrus wondering if she gave her dead blowfish the best life possible — I’m usually good right up until the part when she talks about Pablow making babies in the afterlife with a seahorse named Sadie. In the close-ups you can see that she knows how absurd it is to feel this way about a fish, and also that she’s fighting her way through to the end of the song with everything she has; then she gets to “I miss you / So bad,” biting off the second word, defiantly, like she owns the feeling, has a right to it, and doesn’t care if it’s absurd. And with that she hammers the keys once, says “damn,” and walks offstage to hug a friend. 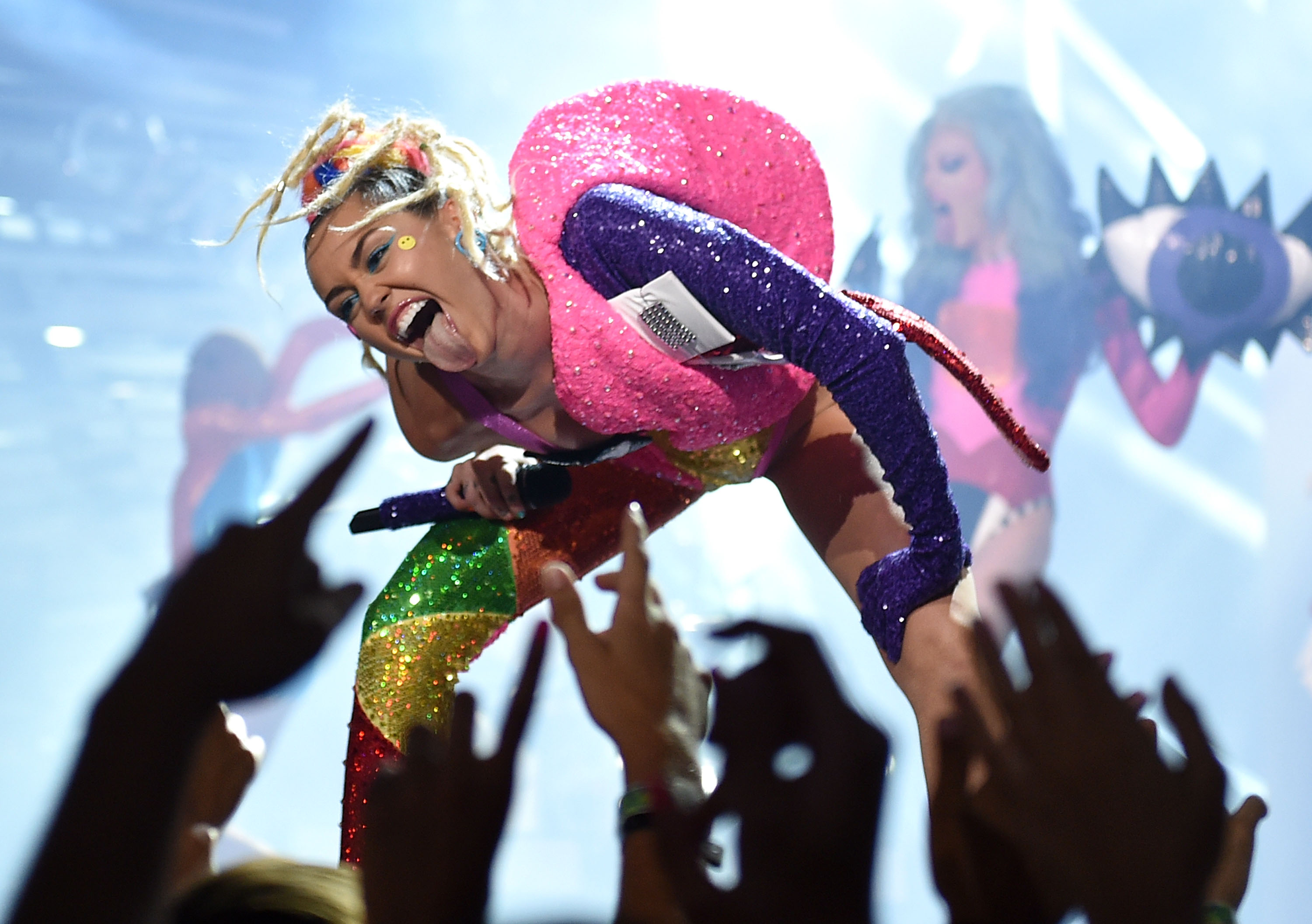 This is a whole Miley Cyrus album that does not have time for your judgment of the feelings it’s about, which you could Venn-diagram with three circles marked LOSS, HORNINESS, and LET’S GET FUCKED UP. The best parts take place in the overlap between all three, like on “Something About Space Dude,” where Miley’s dream of “skateboarding in a spacesuit” gives way to rueful adult yearning (“Something in the way you fuck me / You’re never fucking there”). You could easily have sorted this monster of a record into two albums of Mike Will sex jams (like the single-entendre “Bang Me Box”) and Flaming Lips–backed interstellar overdrive, but that would have been no rock-and-roll fun. Why not use all the illusions at once? The Sweat is the Suit! The Suit is the Sweat! Miley’s insistence on the varied aspects of her persona as reconcilable and complementary, on the perfection of her mess of a self, is the most grown-up thing about this album; I believe it was either Gandhi or Neil Young during the Geffen years who said, “My commitment is to truth, not consistency,” and I know it was Miley Cyrus who said, “Self-control is not somethin’ I’m workin’ on.” Watching her strike out in this many directions — from Moroderesque porno-disco to a “Wrecking Ball”–style slow burner about wanting to do it on the lawn “after we’ve been drinkin’ all night and done a bunch of pills” — is particularly exciting because we’re not that far removed from a historical moment when the two avenues to adulthood open to reformed tweenpop idols involved rehab or Linda Perry. Cyrus, who’s lived at least four different artistic lives in the time that Game of Thrones has been on the air, has actually flirted with the trad-rock route before — in older Backyard Sessions videos from 2012, she sings FM-radio standards like “Look What They’ve Done to My Song, Ma,” “Lilac Wine,” and “Jolene” and generally does an Employee-of-the-Month-plaque-worthy job of conforming to, like, Anthony DeCurtis’s idea of a respectable and respectful young person.

She can still get to this gear when she wants to, like on this “50 Ways to Leave Your Lover” cover from earlier this year — although this is 2015 Miley, so she leaves Paul Simon’s pronouns as they are and adds a shiver of danger to “Would you please explain / About the 50 ways,” turning the song into lesbian pulp about two women plotting to throw Gus under the bus. That subtext, possibly because it is a thing I am basically making up, did not stop commenters on Cyrus’s Facebook page from expressing their preference for this Miley over the “new Miley.” Your Miley may vary; I like the idea of the “50 Ways” Miley and the astral-traveler Miley and the fiercely pantsless cocaine-’80s Miley on the cover of Bangerz and the Miley who thinks she can rap and the sad girl in the unicorn pajamas all coexisting in a state of perpetual reboot, privileging immediacy and excitement and ad-hoc genre hybrids over mastery, rejecting out of hand the notion that it’s even possible to “try to be something that you’re not,” because who besides Miley is to say who Miley is today? As Brian Eno (Zooropa collaborator alert!) once suggested, the concept of “pretension” is just a hangover from the British class system, with its deep suspicion of anyone attempting to rise above their station. “I’m very happy to have added my little offering to the glowing mountain of things described as pretentious,” Eno wrote. “I’m happy to have made claims on things that I didn’t have any ‘right’ to, and I’m happy to have tried being someone else to see what it felt like.” No amount of self-reinvention can turn Miley into a person with the right to tone-police Nicki Minaj in the Times, obviously — but the more time you spend with this album, this glowing mountain of occasionally pretentious gestures, the more it feels like Cyrus could do almost anything else she decides to.