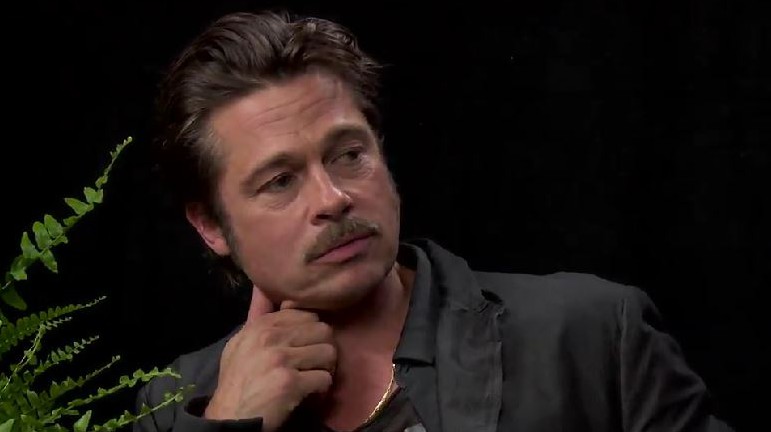 Between Two Ferns shouldn’t work as well it does: The guest is in on the joke, and so nothing that Zach Galifianakis can throw at them should be too surprising, should merit much more than an arched eyebrow or a grudging smile of complicity. This isn’t Borat terrorizing a Southern dinner party with freshly bagged feces, or even Eric André vomiting in front of Lauren Conrad. It’s a safe enough space for the president to plug Obamacare; the straight man in the chair at fern-left knows going in that one of the most famous comedians in the world is going to interrogate him with a weird and theoretically off-putting one-two combination of distracted ignorance and brutal insults. Everyone’s watched the previous victims and still signed the release form. Everyone’s game for their time in the Fernderdome.

So Brad Pitt rolls up, knowing the road to promoting Fury is strewn with banana-cream-pie land mines, and endures four or so minutes of Louis C.K. interruptions and some B-level gags about Angelina and Jen before Galifianakis drops the rubber hammer.

Do you think maybe people focus maybe too much on your looks and, you know, don’t even realize that you’re just a shitty actor?

You know the magician’s going to produce the queen of hearts with your name written on it, even though he’s torn it into a thousand pieces and fed it to a guy in the back row, but you marvel at the trick anyway. We can probably all agree that Pitt is not, in fact, just a spectacularly good-looking shitty actor.

Or can we? Do we now have to bite down on that hard, bitter truth-nugget and see if there’s some structural integrity to it? Do we need to roll back the tape and see if Pitt flinches, ever so slightly, as he processes the sucker punch in that fleeting moment before he bazookas that hunk of gum into Galifianakis’s face, wondering if maybe he could’ve done more with the thin character he was handed in his new tank movie than wheeze out whatever pieces of Aldo Raine were were still lodged inside of him, then let his amazing haircut do the rest of the heavy lifting? Does he still regret the unfortunate Quaker-beard-and-straw-hat choice that nearly destroyed 12 Years a Slave all by itself? Does he need to reexamine what he does with his hands when there aren’t snacks readily available to keep them occupied, lest they start flying out in front of his mouth like the deranged murder of finger-crows he unleashed in every Twelve Monkeys scene? Just how hard does Galifianakis need to press the throbbing red Insecurity Button buried deep beneath Pitt’s mountain of money, occasional critical acclaim, and extravagant domestic bliss, to cue up the theme from Dallas?

Oh my god, is Brad Pitt a shitty actor?!?

Come on, he’s not. Would his Oscar-winning wife have cast him in her next movie if he couldn’t hold his own? Let’s all pick that wad of gum out of our eye socket and move on with our day. It’s a comedy video. We’re just funnin’ around, pretty boy. Nobody even remembers Troy.