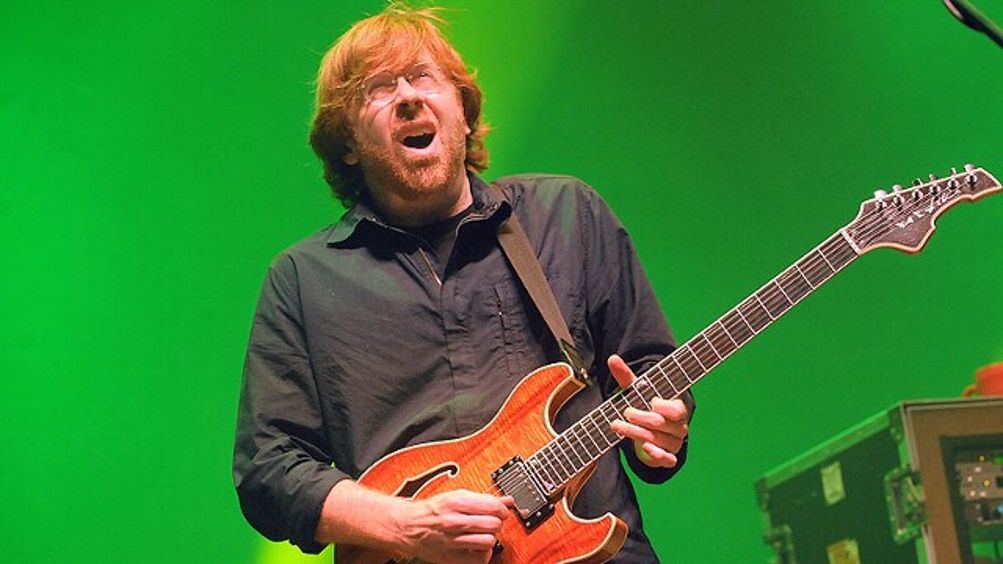 On December 2, 1983, a four-piece band called Blackwood Convention played its first-ever show inside the cafeteria of a University of Vermont dorm. The set list was composed entirely of bar-band covers — real played-to-death groaners like Wilson Pickett’s “In the Midnight Hour,” the Hollies’ “Long Cool Woman in a Black Dress,” and Creedence Clearwater Revival’s “Proud Mary,” along with some Doors and Dead tunes. During rehearsals over Thanksgiving break, the band members had workshopped a smattering of originals with uninviting titles such as “Fluorescent Gerbils” and “Skippy the Wonder Mouse,” so it was just as well that they stuck to other people’s material for their big debut. Based on the renditions of the Grateful Dead’s “Scarlet Begonias” and “Fire on the Mountain,” which is all that remains of the performance in recorded form, the ‘Wood truly distinguished itself as a monumentally mediocre boogie outfit — with all the wiggly guitar and blobby bass that implies — and the sort of nondescript hippie band that rounds out the bill at countless campus coffeehouse open-mic nights every semester. Toward the end of the gig, the audience rendered its verdict by putting Michael Jackson’s Thriller on a nearby turntable and drowning out the band. (In Blackwood Convention’s defense, Thriller drowned out everything in ’83.)

You’ve certainly already surmised that Blackwood Convention later became the hippie band that nondescript campus hippie bands would copy for the next several decades. Still, it’s a little hard to fathom that Phish will turn 30 later this year. The line of the band’s career has been anything but straight: There was the two-year hiatus in the early ’00s, followed by a five-year breakup that ended in 2009. Phish didn’t start playing out regularly until 1985, and not outside of New England until around the release of its first album, 1989’s Junta. The band’s “glory years” were in the mid-to-late ’90s, when it became one of the top arena acts in rock while openly forsaking mainstream media coverage. Since re-forming, Phish has played a fraction of the concerts it used to perform annually, and released only one studio album, 2009’s Joy. (Though a new album apparently is in the works.)

But this tortured timeline of fits and starts spans 30 years all the same. So now seems like as good a time as any to ask a simple yes-or-no question: Is Phish a great band?

Musical greatness is typically achieved by two kinds of artists. The first kind (like Jimi Hendrix, Nick Drake, Kurt Cobain, or the Notorious B.I.G.) shine with retina-shredding brightness for a very short period of time and wind up changing music in some tangible way. You almost always have to die to achieve this sort of greatness. If Ian Curtis had recorded Unknown Pleasures and Closer, and then lived to create three decades’ worth of half-assed Joy Division songs that made Unknown Pleasures and Closer seem like flukes, he’d be Rivers Cuomo.

The other kind of greatness derives from never being less than good (and staying connected to a sizable core audience) over many years. U2, R.E.M., Sonic Youth, Metallica, Pearl Jam, Radiohead, and Wilco are the most notable recent examples of this lived-in greatness — and so is Phish, though it rarely gets mentioned in this company. Not only does “greatness” have a different connotation when applied to Phish, so does “good” — Phish has never been conventionally good. For 30 years, Phish’s version of good has been specific to the band (and possibly to bands of its ilk, though none of them are as good at being “good” as Phish is). This “goodness” has been perceived (by non-Phish fans) as a detriment. But now, the gap between good and “good” is smaller than ever. “Good” is actually more relevant to the current music landscape, even if many people don’t think Phish is.

Confession time: You could probably call me a Phish fan, though it’s contingent on whether “you” are also a Phish fan. If you are a fan — or, cough, a “phan”— then I’m actually a dilettante. I’m knowledgeable enough to know that the version of “Prince Caspian” on 1996’s Billy Breathes is not the best version; I can even point to the rendition from the ’96 Halloween show as my personal favorite. But I’m not so well versed that I can expound thoughtfully on whether this is the definitive live performance. (My grasp of set list stats is seriously remedial.) I’ve also outed myself as a poseur by picking the most straightforward cut from Phish’s most straightforward album, and not something like “Colonel Forbin’s Ascent” or “Weekapaug Groove” or “Chalk Dust Torture.” Also: I was not at the Clifford Ball, the Great Went, or Big Cypress. And while I know what the Rhombus is, I have no interest in ever visiting it.

If you’re not a Phish fan, I am an anthropomorphic Bob Marley poster spouting a torrent of nonsensical gibberish.

Convincing skeptics that Phish is a worthwhile listen ranks among the hardest sells in all of music fandom. There’s even a podcast about it: Analyze Phish features Parks and Recreation writer-producer (and Grantland contributor) Harris Wittels trying to convert fellow comedian Scott Aukerman into a fan (unsuccessfully, despite several episodes spread out across two years).1 People who love Phish can never know enough about Phish; everybody else works hard to keep the number of Phish factoids rattling around inside their craniums at zero. I used to belong to the latter group — an aversion to jam bands was ingrained back in my college years, which coincided with the heyday of Phish and the band’s sportier, more popular cousin, the Dave Matthews Band. But as I grew older, my resistance weakened. I began to wonder why I so intensely hated a group that I knew virtually nothing about. Finally, I decided to investigate. This was my first step toward becoming a Phish fan: In order to like Phish, you must consciously decide to like Phish.

A voyage into foreign territory this potentially treacherous requires a guide. Thankfully, I had my friend Rob Mitchum, who’s been listening to Phish since high school and plans to attend his 50th Phish concert this summer. When he’s not working as a science writer for the University of Chicago, Rob is a rock critic who’s written for Pitchfork and the Chicago Tribune.2 I asked Rob for help because he is bilingual — he speaks the language of Phish while also having enough perspective on the band to be able to communicate coherently with an outsider like me. This proved invaluable as I waded deep into the mystical land of Gamehendge3 and well past the point of no return.

“I think Phish managed to unintentionally create the perfect mixture of perennially unfashionable music,” Rob explained in an e-mail. “First, you have the jam band lineage, and the cultural carryover of ‘the ’60s never died’ crowd from the Dead, positioning them on the far side of the spectrum from punk/indie. Second, their primary musical influences were always more ’70s prog than the Dead; Zappa and Yes and ELP and other bands that will never be cool and aren’t easy listens. Finally, humor has always been a big part of the Phish approach, from the goofy lyrics to trampolines and vacuums in the live show.”4 There’s no more reliable way to be critically shunned than to try to make people laugh.

“This won’t be a popular opinion in the Phish world,” he continued, “but I often think that the closest match for them currently is ICP, even if they’re miles and miles apart musically.5 Both bands have this deep, intricate mythology that takes forever to learn and weeds out the newbies, and the more you invest your time in them, the more you get out of it, which is both exciting and rewarding but also paints a thick boundary between them and us.” 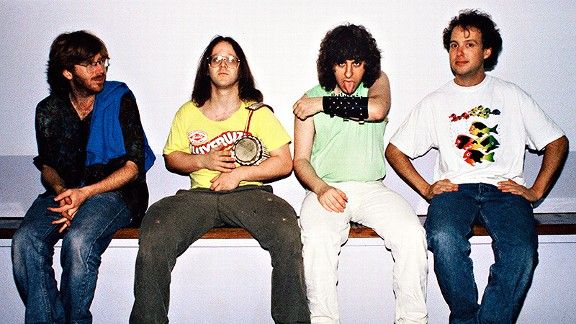 Rob carefully laid out some helpful dicta to ease me into the world of Phish. First of all, he told me to avoid the studio records — “They are just not good at writing hit songs or making albums,” he said flatly — insisting I focus instead on Phish’s voluminous body of 1,000-plus recorded shows, which you can easily download or stream for free if you know where to look.6 Because my entry point into Phish was the ’96 Halloween concert — where the band performed one of my all-time favorite albums, Talking Heads’ Remain in Light, in its entirety — Rob steered me toward the mid-’90s concert output, when Phish was most informed by classic rock.7 Phish is constantly compared to the Grateful Dead by people who aren’t familiar with the group’s music; it’s similar to how anyone who doesn’t listen to country compares every country artist to Johnny Cash. But while Phish borrowed some aspects of the Dead’s creative and organizational philosophies, it moves at a dramatically higher rate of speed musically. A typical Dead jam moseys along amiably with the swiftness of a midday Parisian lunch; Phish’s jams are all tension and release, with minutes-long swaths of airy space giving way to wild, guitar-heavy climaxes. Phish also has a completely different set of reference points. The Dead set out to synthesize blues, country, folk, bluegrass, early rock and roll, and jazz into a psychedelic digest of 20th-century American music; Phish attempts something similar, only with the history of AOR. It’s just that Phish mostly disregards the “album” part.

Let’s say it’s 50 years in the future, and you’re trying to figure out how and why pop music has arrived at its present permutation. Let’s also say that recorded music still exists, but no longer as a product that artists attempt to sell. Like other forms of devalued currency, recordings have flooded the market to the point of virtual worthlessness. But music fans are still willing to pay to hear a version of a song that doesn’t exist yet, and will only ever exist once. Because of this economic development, bands spend a lot less time making albums and devote the majority of their energy to honing their live shows. Over time, people gradually stop talking about fixed versions of songs and begin evaluating bands on their ability to perform and refresh their body of work. This creates a new paradigm for how we talk about music — pop historians start rating the Dead over the Beatles as the best rock band ever. Music is perceived less like film and more like theater or sports — as a venue for live events that lose their essential appeal if they’re not viewed in the moment.

I obviously don’t know for certain if this scenario will happen, but I won’t be surprised if it does. As a person who’s long been obsessed with albums, I hope they never go away. But I can’t make a practical financial argument for most bands to continue making them, other than as an advertisement for the live show. While recorded music isn’t exactly on the verge of extinction yet, it has been perpetually teetering on the precipice of insolvency since the turn of the century. But live music endures — it can’t be mass-produced, diluted, or “shared” in a digital realm. If artists no longer have the means to make records, the concert stage will become their primary canvas.

If this is how things play out, our theoretical rock critic in the year 2063 will look back at the late ’90s as a turning point — record sales peaked, Napster made file-sharing accessible to millions, and a band called Phish presented an alternative model in which memorable live experiences mean at least as much as iconic songs, and high-grossing tours measure an artist’s reach as well as chart-topping albums do. This is how Phish is “good.” It could soon be how all music is good.