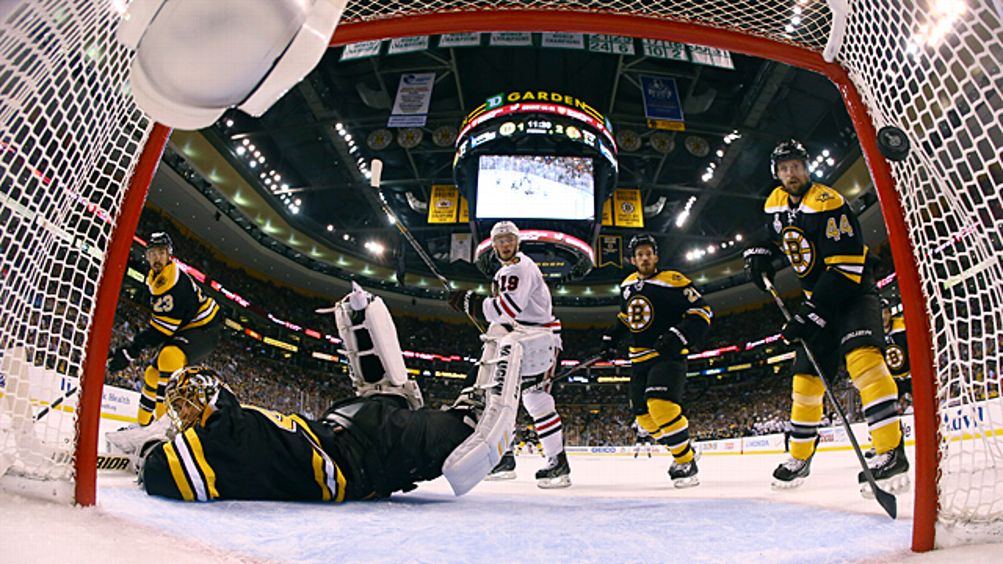 You’re not supposed to cheer in the press box. It’s a place of business, after all, and while it’s an undeniably silly one, filled with questionable wardrobe choices and molasses Wi-Fi, and grown adults heaping criticism on gifted man-children while snacking on jelly beans and shrimp cocktail, it still has its rules of professional decorum. To cheer would be to misunderstand one’s role.

And yet at TD Garden on Wednesday night, as the goals began to pile up in what would eventually be a 6-5 Chicago Blackhawks win over the Boston Bruins in overtime in Game 4 of the Stanley Cup final, you could look up and down the row of writers and see how many of them were turning into nothing more than fans. You could hear claps and hoots, see wide eyes and dropped jaws, and generally feel the nervous, giddy energy that had enveloped the entire building.

Reporters are supposed to be objective and unbiased; they’re supposed to exude “seen-it-all” and not “did-you-see-that?” And Wednesday night, I wasn’t and I didn’t. I was pulling for Chicago, hard. It wasn’t personal: If the Bruins had been the ones entering the game down 2-1 in the series, I would have wanted them to win. Nor was it overt: I smiled just as loopily when Boston tied the game at 4-4 early in the third period as I had when the Blackhawks scored their first goal on a shorthanded odd-man rush.

It’s just that I wanted the teams to go back to Chicago on Saturday tied at two games apiece, a guarantee that we’d get to see them play at least twice more. Hopefully, it’ll go all the way to seven, and then to infinity and beyond. I don’t want this idyllic series to ever have to end.

I’m not alone. The hockey gods are on my side. Like the girl in that commercial, we want more! How else to explain why three of the first four games have gone to overtime (and the first one triple that)? Perhaps they’re squeezing all the hockey we lost in those stupid months of lockout into these last few days, like camp pals in late August who pull all-nighters because they don’t want to say good-bye.

Last year, the L.A. Kings were up 3-0 on the New Jersey Devils and I remember there was beaucoup press-box grumbling in the third period of Game 4 once the Devils took the lead. Many were hoping for a sweep, a quick finish, one (or two!) fewer cross-country flights. The truth is that people are always cheering in the press box — maybe not for a team, but for an outcome, whether based on personal logistics or fatigue or, in most cases, a good story.

This year, the good series is the good story. I’m not sure I heard a single complaint, and sportswriters are notoriously cranky people. More broadly, ratings are up. I get texts during games from friends who have maaaaybe heard of Sidney Crosby (they all know Jaromir Jagr, natch) that say things like “I LOVE HOCKEY!” and asking me if I’ll go with them next year to their first game. The answer is always yes.

Defensive purists (and both teams’ coaches) may have cringed Wednesday night as 11 goals were scored, and Bruins fans would of course rather be going to Chicago with a 3-1 series lead. But for the rest of us, the night guaranteed we’ll be sticking around until at least next Monday, and possibly next Wednesday. Another week of high-caliber and star-studded playoff hockey? How could you not want to cheer for that?

Ah, yes — those 11 goals. They came every which way — deflections, rebounds, untouched point shots, bizarre Magic Bullet bounces — and nearly every one could inspire a column of its own. Monkeys got off backs; fists were pumped; barbaric yawps were sounded. There was something for everyone (except Corey Crawford’s goalie coach).

So I really have no choice but to assign them power rankings based on a highly subjective and unscientific method that takes into account questions like “How cool was it to watch?” and “How representative was it of the series as a whole?” and “Did the player celebrate so hard that he crashed into the wall?” You know, that sort of thing. As Don Cherry would say, let’s go!

This was a tough sequence for Brandon Saad, who basically committed two errors on one play. This goal by Peverley was his first in 17 games, which would be a nice story if I could even remember all the way back to the first period of Wednesday night’s game. This GIF is like a relic from a long-ago era, or Atlantis — only a dim reminder of what once existed, before we knew what we know now.

The same thing goes for the Michal Handzus goal, which opened scoring Wednesday night but feels like something I experienced several lifetimes ago. It gets bumped up a slot higher because shorthanded goals are cooler and because I enjoyed watching Handzus crash into the wall. (Even that distinction wouldn’t last long; Patrick Sharp would go on to one-up him.) Saad, the goat on Peverley’s goal, was the G.O.A.T. when it came to this one: First he stole the puck from Tyler Seguin,1 then he beat Zdeno Chara, then he left a great pass for Handzus. Let’s just say that more than one person in my Twitter feed observed that “The Saad giveth, and he taketh away.”

Another goal that sort of gets lost in the shuffle through no fault of its own — the Blackhawks would score less than a minute later to regain their two-goal lead, negating some of its impact — but since Chara earned an assist, I’d like to take this opportunity to implore you to read two great columns on the mighty bike-riding man, one by Bruce Arthur and the other by Nick Cotsonika.

“I got to say this,” said Toews in the postgame press conference, after being asked about how it felt to finally break his increasingly scrutinized goal-scoring drought (he’d admitted to thinking about it “every waking moment” earlier this week), “the last couple days Seabs [Brent Seabrook] has been coming up to me, asking me what I’m thinking about.2 You know, I have to give him the right answer. I’m thinking about scoring a goal.”

It’s really not too often you can make Chara look like that. (Maybe Toews had a point after the game when he said that “you can’t give him too much respect.”) Also, sorry, but Aaliyah’s in your head now. It’s just science.

Blackhawks coach Joel Quenneville can try to keep Kane and Toews apart, but love finds a way, you know? The two were put together on a line with Bickell for Game 4 after having success earlier in the playoffs, and the move paid off — a couple of minutes after Toews scored, Kane added a beautiful backhand goal to give the Blackhawks what felt like an on-the-verge-of-a-blowout 3-1 lead. (Of course, a blowout ended up being the furthest thing from what happened, to the benefit of us all.) The most impressive part of the whole sequence was the puck movement; you have to wonder if someone taped Justin Bourne’s assessment to the locker-room wall. “Just playing with each other for the first time in a little while again, we feel we can get even better,” Kane said, “and learn what each other does after playing a game like that.” I hope it’s something like this.

The clouds parted, a choir of angels began to sing, and the Chicago Blackhawks finally scored a power-play goal. It was their first in 30 attempts — and the first one given up by the Bruins’ excellent penalty-killing unit since Game 5 against the New York Rangers in the second round. Hossa earned an assist after missing Game 3 with an undisclosed injury, and Sharp’s celebration was so primal that it knocked him right off his own feet.

Boychuk had a pretty healthy game-within-a-game going with Sharp in the third period — witness this crushing upside-down check, which Sharp followed up with a hit of his own — so it was fitting that not only did both players get on the scoreboard, they both celebrated in style. Boychuk’s one-knee spin move was impressive on its own, but look at that flawless dismount! His crescendo of a slap shot to tie the game at five was perhaps the loudest TD Garden got all night. I’m also now terrified of him.

What a goal this was!!!! Two beautiful cross-ice passes from Seguin and Peverley, the second of which fooled Chicago goalie Corey Crawford so much that he was nowhere to be seen when Kelly received the puck in the middle of the crease just a few inches from an abandoned and desolate net. Kelly buried the easy chan—

Wait, sorry, what’s that? He … MISSED??! But the goal horn sounded! Oof. This play was the Charles Smith trying to make a layup of hockey. On to the real no. 2 …

There was so much to celebrate about Bergeron’s score. It absolved Kelly, if you’re the forgiving type. It marked a Bruins comeback from twice being down by two goals, once at 3-1 (when it really felt like Chicago could put the game away), and again at 4-2. It was Bergeron’s second of the game; his goals are back-to-back on the score sheet. It beat Crawford glove side, the way several shots did Wednesday night, and it instantly revitalized one of Canada’s most masochistic debates: the one about who will be Team Canada’s goalie in next year’s Olympic Games. (Let’s just say, with Team Canada general manager Steve Yzerman on hand for the game,3 it wasn’t the finest of auditions.) I guess Bergeron really is, as Brad Marchand put it, “the perfect guy.”4

Oh, and then there was ageless beauty Jaromir Jagr, who was an absolute monster in the corners immediately preceding the play and who made the whole sequence possible. The weighted vests are paying off.

Sure, there were goals that were flashier or feistier than Brent Seabrook’s slap shot from the point. But this was the overtime game winner, the goal that has guaranteed us a Game 6 and, perhaps more importantly, saved us from two off days spent wondering over and over what happened to the Blackhawks and using up our annual allowance of the word “brink.” And for that, we must be grateful. As Bruins fans filed out of TD Garden, the PA system began playing Bon Jovi’s “Wanted Dead or Alive.” (Later, it would go with Weezer’s more on-the-nose “Say It Ain’t So.”) After three overtime games, the lyric Sometimes I sleep, sometimes it’s not for days really resonated.