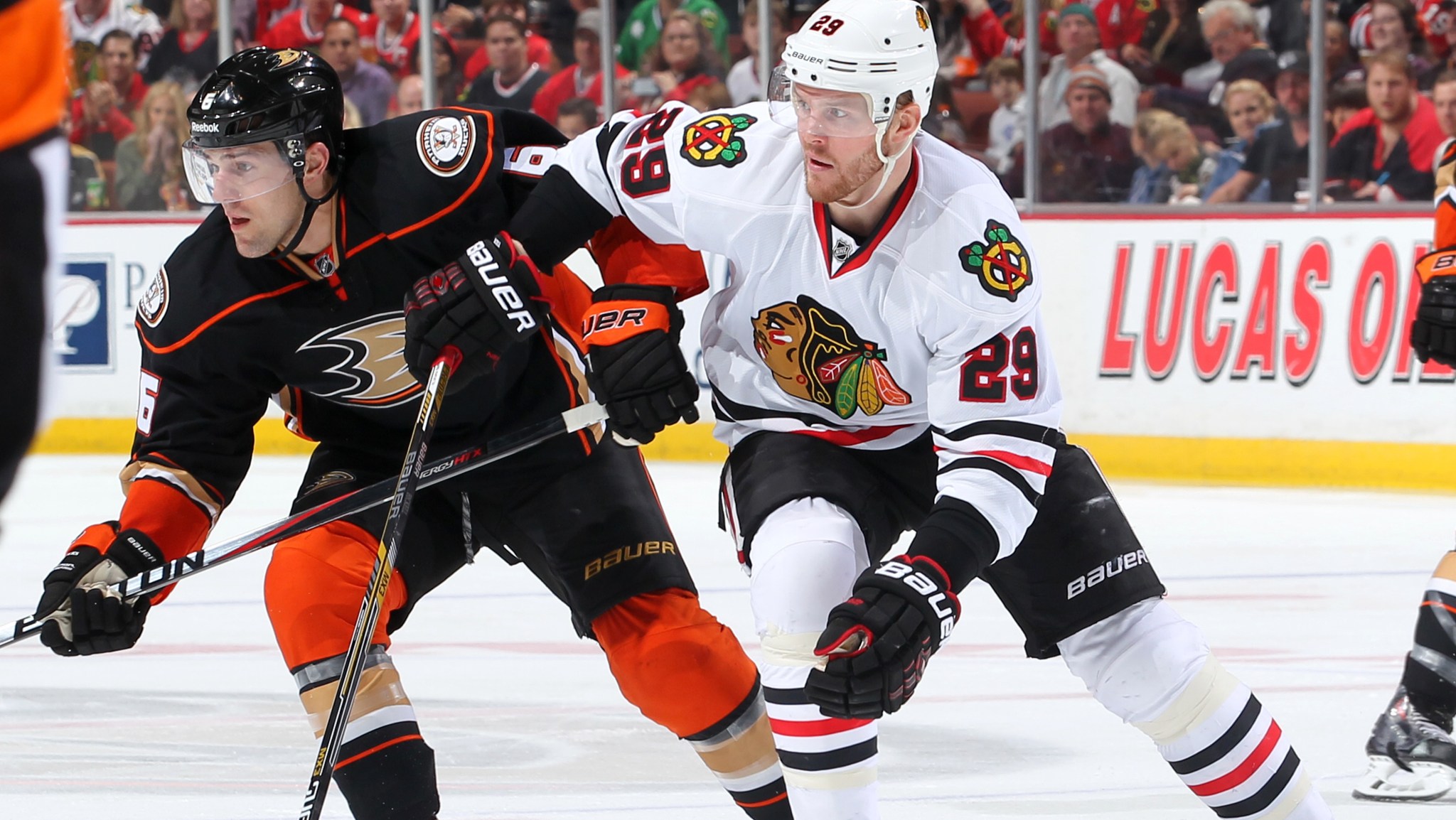 Twelve down, four to go. We’re on to the NHL’s conference finals, and if you’re at all confident that you know who’s going to the Stanley Cup finals, then you’re a much smarter fan than I am.

Luckily, the NHL has wisely given us the next two days to think about it, because honestly, who’d actually be in the mood for more hockey now? Instead, let’s all take a few days off to mull over the matchups, comb through the story lines, and come up with some predictions.

Will they be good predictions? No. That would take two months, minimum. But we’ll do the best with what we have. On to Round 3 …

Season series: The Blackhawks took two out of three games; the Ducks never managed to score more than one goal in any of them.

Playoff history: They’ve never met before in the playoffs. But they did meet once in a movie, according to this image that’s shown up 400 times in your Twitter feed this week.

Dominant narrative: Two teams that have both looked just about completely unbeatable face each other in a battle of the powerhouses.

How they got here: After a hard-fought win over the Predators in the opening round, the Hawks cruised to a surprisingly easy sweep over a Wild team that we’d been led to believe was pretty good.

Conn Smythe candidate: Patrick Kane. Why is Kane so good in the playoffs? Old-school hockey wisdom tells us he shouldn’t be. After all, he’s a speed and skill guy, and while he’s not exactly soft, he’s never been confused for a power forward. Guys like that are supposed to fade in the playoffs, when every square foot of ice turns into a war zone. And yet Kane seems to get even better during the postseason, especially in close games. What’s the secret? Is it the mullet? It’s probably the mullet.

Wakey-wakey: Marian Hossa. Counting back to last year, it’s now been 23 games since Hossa scored on a goaltender in the playoffs.1 He’s still productive — of his seven assists this spring, six have been the primary — and he’s so good defensively that the Blackhawks don’t necessarily need him to score goals. But he usually does, and when the puck finally does start going in for him, a stacked Chicago roster gets even scarier.

The big question: Which Corey Crawford shows up? In the first round, Crawford struggled and lost his job to backup Scott Darling, who eventually struggled and handed it back. In the second round, Crawford was excellent. Maybe you look at him as a guy who needed a wake-up call in Round 1 and is now locked in and ready to win another Cup, but I’m still a little nervous if I’m a Blackhawks fan.

Health watch: Defenseman Michal Rozsival broke his ankle on this play, which I cannot implore you strongly enough not to watch. He’s done for the year, and perhaps beyond. Kris Versteeg is day-to-day.

Key number: 72.7 percent — The Blackhawks’ penalty-killing efficiency in both the first and second round. You always like for your special teams to be consistent, but you’d prefer they weren’t consistently bad. It wasn’t enough to cost the Hawks against the uneven Predators and the overmatched Wild, but the Ducks could be a different story. In what projects to be a physical series, power plays will be crucial — Chicago will need to be much better at killing them off.

Bandwagon status: They’re on the verge of a mini dynasty and are a hell of a fun team to watch, but the bandwagon already filled up and left the station during the regular season. Check back this summer after the salary cap dismantles half the team; we should have some vacancies then.

They win this series if: Crawford doesn’t implode, they sort out the penalty kill, and the Hawks’ best players can at least match the Ducks’ best.

How they got here: They swept the Jets in Round 1 and had only slightly more trouble knocking off the Flames in five in Round 2. They really, really hate heartwarming underdogs that used to be in Atlanta.

Conn Smythe candidate: Corey Perry, bless his punchable little face, has been on fire, racking up seven goals and 15 points in just nine games. He left the final game against the Flames with what looked like a nasty leg injury after being clipped, and then came back in time to score the series winner in overtime.

Wakey-wakey: Kyle Palmieri. He’s been limited to just two assists over the opening two rounds. Granted, he’s not really in the lineup to rack up points, but when a team is running as hot as the Ducks are, you have to nitpick a little in this category.

The big question: How will they do when it’s time to pick on someone their own size? The Ducks have unquestionably had the easiest road to the conference finals of the four remaining teams, and neither Winnipeg nor Calgary was able to put up much of a fight. That’s not Anaheim’s fault — all you can do is beat the teams the schedule puts in front of you, and that’s what the Ducks went out and did. But the Blackhawks will be a much different test, and it will be interesting to see how the Ducks react the first time they get punched in the mouth.

Health watch: We’re still not 100 percent sure what (if any) lingering effects Perry might be feeling, but all indications are that he’ll play.

Key number: 0 — Career games coached in the third round and beyond by Bruce Boudreau. That number will obviously change once the series starts, and hopefully that allows Boudreau to get past the constant focus on his playoff disappointments and instead enjoy the credit he deserves as one of the very best coaches in the league.

Bandwagon status: Reasonably high, if only because it would be great fun to see Boudreau finally win the Cup. As long as you’re not doing it ironically because of the movies, hop aboard.

They win this series if: Ryan Kesler can shut down Kane, Jonathan Toews can’t shut down Perry, and Frederik Andersen continues to quietly have an excellent postseason.

Prediction: Lots of big plays from the stars, a handful of key goals from random depth guys, more than a few periods of overtime, and the whole thing comes down to the wire. Hawks in seven.

Season series: Weirdly, they played all three games in a two-week stretch in November and December. The Lightning won all three, scoring 15 goals in the process.

Playoff history: This will be their first meeting.

How they got here: Not the easy way, that’s for sure. They fell behind the Red Wings 3-2 in the opening round before coming back to win in seven, then jumped out to a 3-0 lead over Montreal and nearly coughed it up before advancing in six.

Conn Smythe candidate: Tyler Johnson. The tiny center has eight goals through two rounds, including one in overtime and another that might as well have been.

Wakey-wakey: Jonathan Drouin. The third overall pick from the 2013 draft went into this season as the favorite to win rookie of the year. Instead, he struggled to put the puck in the net, and the Lightning seem to have at least temporarily lost faith in him. He’s dressed for only three playoff games — going pointless and being on the ice for four goals against — and he was a healthy scratch against Montreal in Game 6 despite the surprise absence of fellow winger Ryan Callahan.

None of this is especially unusual, since teams tend to be nervous about using inexperienced players in the postseason. But it’s worth keeping in mind, since not many teams have a guy with Drouin’s talent waiting to deploy if and when the offense needs a boost.

The big question: Is something wrong with Steven Stamkos? After going goalless through the opening round, Stamkos rebounded with three against the Canadiens, including the winner in the clinching game. But he still hasn’t looked right, and I’ve talked to more than a few people who assume he’s secretly hurt. (He’s not listed on any injury report.) If he gets healthy and/or heats up, this Lightning offense may go from dangerous to unstoppable.

Health watch: Callahan had an emergency appendectomy on Monday and missed Game 6 against Montreal; it’s possible he could be back at some point.

Key number: 1.000 — Tampa Bay’s win percentage in the playoffs when scoring first, leading after one period, and leading after two periods. In other words, it has been just about perfect once it gets the lead.

Bandwagon status: This is pretty much your last chance to get in before every casual hockey fan you know is wearing a Lightning jersey next year.

They win this series if: Ben Bishop can hang in the same ballpark as Henrik Lundqvist, the kids keep scoring, Stamkos gets going, and St. Louis doesn’t have seven games worth of pent-up rage left in the tank.

How they got here: By beating the Penguins in five, then surgically extracting, crushing, and eating the hearts of the Capitals in seven.

Wakey-wakey: Defenseman Keith Yandle, acquired in a blockbuster deal at the trade deadline, hasn’t done all that much so far. He has just four assists in 12 playoff games, and he hasn’t looked anything like the stud blueliner the Rangers thought they were getting.

The big question: Will Rick Nash start scoring? I left him out of the previous section just to get his hopes up, but come on; two goals in 12 games this year leaves him with just seven in 53 career playoff games. He’s playing reasonably well, so some of this has to be bad luck, but still … this is getting creepy, right?

Health watch: Mats Zuccarello remains out with a concussion mysterious upper body injury, but he could return during this series.

Bandwagon status: If you must. They had a great run last year and may have deserved a better fate in the final, so maybe there’s a little karmic justice kicking in here. Not much, but a little.

They win this series if: The goalie plays well, the forwards score, and they can shut down the other team’s star players. Sorry, I’m kind of running out of ways to rephrase that in every one of these sections.

Prediction: I picked the Lightning over the Rangers in the conference finals when the playoffs started,2 so I can’t back out now. And I’m OK with that, because I think the Lightning have the higher ceiling. They just have to find it, and then figure out how to stay there.