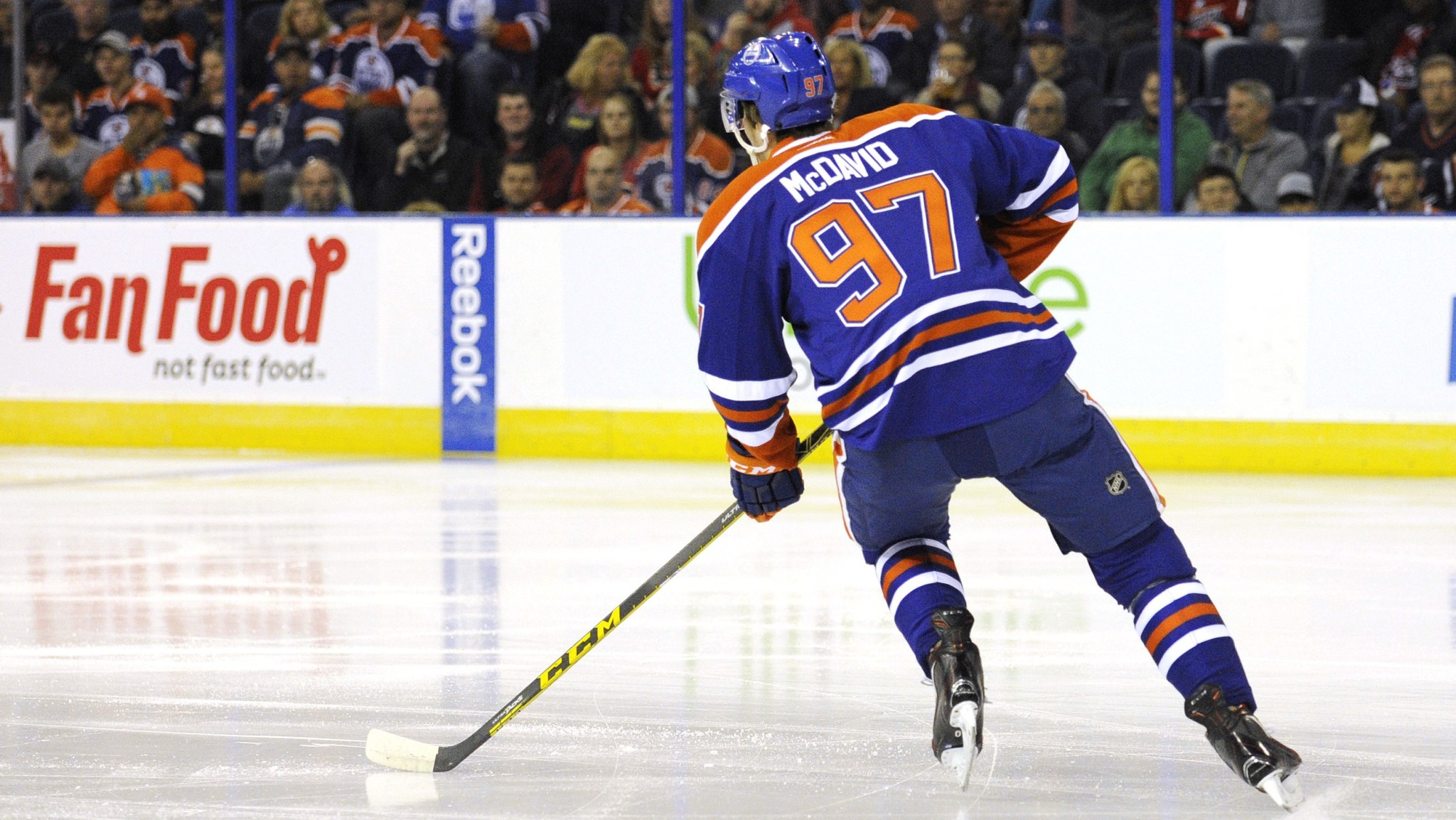 These days, the NHL loves Las Vegas. The league has spent the past year openly flirting with giving the city its first major pro sports team, with everyone expecting a team to begin play there by 2017. And that’s in addition to the league holding its annual awards show in Vegas, which it has already been doing for years.

If it’s good enough for the league, it should be good enough for us, so let’s use those same awards to get a taste of some Vegas action. With the preseason schedule mercifully wrapped up and real hockey just days away, it’s time to hit the sportsbook for our annual attempt to predict the coming season’s award winners. And since anyone can pick the obvious candidates, we’re going to take it a step further. For each award, we’ll pick one favorite, one long shot (defined as 10-1 or longer), and one off-the-board pick. We’ll be using the latest odds from Bovada as of Tuesday morning.

A look back at last season’s award winners reveals a mix of preseason favorites (Erik Karlsson was the top pick for the Norris, Alexander Ovechkin was listed second for the Rocket Richard, and Carey Price was third for the Vezina), one quasi-long shot (Aaron Ekblad was 7-1 for the Calder), and two big long shots (Price was listed at 50-1 for the Hart, and Jamie Benn was at 50-1 for the Art Ross).

If this season follows suit, there should be a chance to hit on at least a few surprises. Will I be able to find them? Looking back on past history,1 it’s fair to say I don’t love my odds. But if the NHL is willing to gamble on sticking another team in the desert, I can stick my neck out on a few underdogs. Hey, I’m probably due, right?

The favorite: Sidney Crosby sits alone at 7-4, ahead of Ovechkin at 6-1. But I’ll take the 5-1 choice: Islanders captain John Tavares, who narrowly missed out last season and seems like a guy who’ll win one or two of these over the course of his career. Might as well be this season.

Off the board: Neither Sedin brother is listed here even though both have won the award since 2010, but given my pessimism on the Canucks, I’ll pass. Besides, another missing name jumps out here: Washington’s Nicklas Backstrom, who’s finished in the top 10 four times and led the league in assists last season. He’ll need to keep being an elite playmaker while nudging his goal scoring back up over the 20 mark to have a shot, but with an improved Caps team around him, that’s a decent bet to happen. He’s the pick.

The favorite: It’s Crosby again, which makes sense — more often than not, the Hart goes to whoever wins the scoring title. Of course, 2014-15 was one of the “not” years, so we’ll have to keep our eye on the goalies here. There aren’t any at the top end of the list, though, with Crosby joined by Ovechkin (6-1) and Tavares (17-2). I’m already in on Tavares for the Art Ross, so I’ll stick with him here.

The long shot: We’ve got a big list to work with, with 18 players left on the board, including reigning champ Price at 10-1. The only other two goalies are Henrik Lundqvist (28-1) and Jonathan Quick (40-1), and Lundqvist is tempting.

But if we’re going to go out on a limb with our last pick, let’s go all the way out — down to the very bottom of the list, where we find Erik Karlsson at 50-1. The Ottawa defenseman has already won two Norris Trophies; maybe voters are getting tired of handing him that award and want to think a little bigger. True, defensemen almost never win the Hart — Chris Pronger in 1999-2000 was the last to pull it off — but we could have said something similar about goalies this time last season. I’m not high on the Senators this season, but if they surprise, it will be because of the player who’s far and away their best. At 50-1, I’ll roll those dice.

Off the board: Jakub Voracek is a notable omission here, and I could make a case for P.K. Subban under the same logic as Karlsson. There are also some decent goalie options, including Pekka Rinne and Tuukka Rask, and you know I’m fighting the urge to go with Phil Kessel, because trading a guy the year before he’s the MVP would be the most Leafs thing ever. But in the end we’ll go with Backstrom again; if he does come through and win the Art Ross, history says he’s the Hart favorite.

The favorite: Not surprisingly, Price is the favorite here at 7-2. The Vezina has a long history of repeat winners, although we haven’t seen one since Martin Brodeur in 2006-07 and 2007-08. Price is a solid choice, but I refuse to use my pick on the no. 1 guy just on principle, so I’ll dig all the way down to … no. 2. Henrik Lundqvist, at 9-2, gets the nod.

The long shot: Originally slipping in right at our 10-1 cutoff, Washington’s Braden Holtby would have been a strong pick, but enough bettors agreed that he’s been bet down to 8-1. That leaves a shaky field, one mostly made up of good goalies on bad teams (Cory Schneider at 12-1) and above-average goalies on good teams (Ben Bishop at 15-1; Jaroslav Halak at 20-1; Corey Crawford and Marc-Andre Fleury both at 25-1). I can’t quite bring myself to trust Devan Dubnyk, so let’s go with a relatively safe pick: Columbus’s Sergei Bobrovsky, who already won the award once in 2012-13 and comes in at 14-1. The Jackets should be better this season, and if so he’ll get a lot of the credit.

Off the board: There are 16 goalies on the list, including one (Andrew Hammond) who isn’t even a starter for his own team. That gives us half the league to work with here, so we’ve got a puncher’s chance. Several of those omissions are guys from bad teams like the Leafs or Coyotes that we won’t go near, but a few are intriguing. There’s our old friend Brian Elliott in St. Louis, who still can’t get any respect. Veteran Roberto Luongo has been a finalist three times and would presumably get much of the credit if the Panthers made a push back to the playoffs. Of the goalies who’ve found new homes this season, Martin Jones in San Jose seems to have the best chance at putting up big numbers.

But we’ll go with a guy who almost won the award recently, coming in second in 2014. That would be Colorado’s Semyon Varlamov, who quietly had another solid season in 2014-15. The GMs love to look at the win column, and with the Avs looking like a borderline playoff team, that could be Varlamov’s weak link. But if he can post another round of solid percentages while getting Colorado back into the playoffs, he’s got a shot.

The favorite: Drew Doughty (4-1) and Karlsson (4-1) edge out Subban (5-1), and you have to think he’ll win his first Norris sooner than later. But I’ll take Duncan Keith at 13-2, hoping he’ll still be riding a wave of voter appreciation from last season’s dominant Conn Smythe performance in the playoffs.

The long shot: Victor Hedman was the obvious choice here originally at 12-1, but he was bet down hard and heavy almost immediately — he was all the way down to 7-1 as of last night — so I’m going to be a good sport and force myself to look elsewhere. And as tempting as Mark Giordano at 10-1 might be, I’m going to head even further down the list and go with Kris Letang at 20-1. He hasn’t played a full season in years, but if he managed to stay healthy this season on a stacked Penguins team, his offensive numbers could approach Karlsson levels. (And let’s face it, a good comeback story is always worth an extra vote or two.)

Off the board: If you paid close attention to the predictions in last week’s season previews, you saw my suggestion that this could be the year that Roman Josi steps out of Shea Weber’s shadow in Nashville and pulls some Norris love. That was probably a bit of a reach, but I might as well double down here.

The favorite: Guess who? Connor McDavid is the overwhelming favorite here, coming in at 4-7, and is the obvious choice in this spot. But, invoking my “no front-runner” rule, I’ll toss a few imaginary dollars2 at Buffalo’s Jack Eichel at 11-4. McDavid may be the best prospect since Crosby, but remember that Crosby watched the 2006 Calder go to fellow super-rookie Ovechkin. It’s not too far-fetched to see that sort of scenario playing out again this season.

The long shot: One name on the list has already been sent back to junior. That’s Arizona’s Dylan Strome, and he could still be joined by Colorado’s Mikko Rantanen and Vancouver’s Jake Virtanen. It’s tempting to go with Arizona’s Max Domi, especially since he could have his dad threaten to beat up the voters. But my money’s on Chicago’s Artemi Panarin, a 23-year-old KHL vet who’ll be surrounded with plenty of talent and has already shown some tantalizing skill.

Off the board: It looks like Noah Hanifin has made the Hurricanes. It’s rare for a defenseman to step into the NHL straight out of his draft year, and even rarer for him to stick around and play well. But Aaron Eklbad pulled it off last season, and Hanifin could do the same. He’s my pick, although let the record show that this was written before we knew whether or not Dylan Larkin was going to make the Red Wings.

The favorite: Ovechkin (5-2) edges out Steven Stamkos (13-5) for the honors. They’re two of only three players with odds under 10-1, and since I can’t pick a front-runner, I guess by default that means I’m stuck with … Phil Kessel, at 7-1? Gosh, twist my arm. I’ve heard good things about this kid.

The long shot: Let’s be honest; barring injury, it’s going to be Ovechkin or Stamkos (and probably Ovechkin, since Stamkos should be expected to slow down somewhat once he’s traded to Toronto). But there’s plenty of talent here, including two former winners in Corey Perry (10-1) and Crosby (16-1). Vladimir Tarasenko at 12-1 is tempting, too. But I’m going to go with Seguin at 12-1; he’s scored 37 goals in each of the past two seasons, and at 23 is right around the age when great scorers often make the jump to elite status.

Off the board: Ugh. All of the league’s top 10 goal scorers from last season are on the board; we’re down to guys like Jiri Hudler and Radim Vrbata, who both finished 22 goals back of Ovechkin. So did Sean Monahan, but at least he’s young enough to offer some vague hope of improving enough to get into the Richard range. That makes him the pick, but we’re not hitting on this one unless the league starts awarding bonus goals for parody Twitter accounts.

Here's Where We Worry About Ohio State