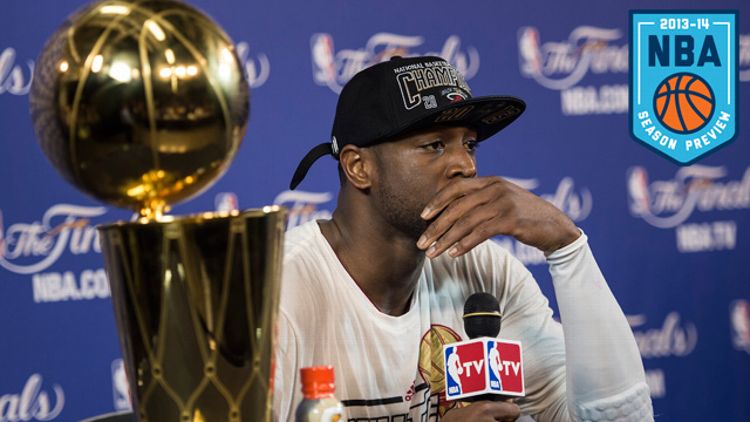 There are millions of basketball fans in America who still hate LeBron James more than any athlete in sports, but when you look at why they hate LeBron, the guy they really hate is Dwyane Wade. The one who’s overrated, whiny, and flops constantly. Cocky when he’s good, petulant when he’s not, always in need of a good ego massage. He gives himself nicknames, he dresses like an asshole. Hollywood as hell. That’s Wade, not LeBron.

This series is about X factors for individual contenders, but really, Wade is the X factor for every contender. If he can stay healthy through the end of the playoffs — healthier than he’s been either of the last two years — the rest of the league is definitely screwed. Even if Wade’s not healthy, if he can come up with a few clutch performances the way he has done the last two postseasons, the rest of the league is most likely screwed.

But as we look at the year ahead for Wade on the Heat, let’s look at exactly where he is right now. He’s the villain. The best villain we have in the NBA. Dwight Howard may drive people crazy, but he’s really more of a punch line. Wade? He’s just successful enough so that we have to respect him, and that makes him twice as unbearable.

And it all starts with LeBron.

Once LeBron won his first title, everyone stopped worrying about the clutch argument and just stepped back to appreciate the endless volcano of perfection that is Bron on a basketball court. We watch him do outrageous things on defense and lock up the best players in the league. We watch him turn defenses inside out from the post, carve them up with his passing, and then, almost like a reflex, decide to destroy people with his scoring from all over the court. Watching LeBron is surreal in four or five different ways on any given night. Nothing has been worse for Dwyane Wade.

LeBron may make every other player on the roster look better, but Wade’s supposed to be LeBron’s peer, and next to one of the greatest players in history, a hobbling Wade is hopeless.

Even if you hate the Heat, you can’t help but get swept up in how beautiful it looks when they’re clicking with LeBron. Then, just as soon as you get caught up in it all, the ball swings to Wade and everyone grumbles for 10 seconds while he dribbles his way into a clanked midrange jumper. It’s not always like that, but that’s the Wade experience when things go bad. That was the Wade experience when it looked like the Heat were beatable in May and June last season.

Is any of this Wade’s fault? Of course not. He’s older, hobbled after years of kamikaze drives to the hoop, and he has still been pretty great despite the limitations. Putting Wade next to LeBron is like putting, say, Kate Hudson next to Olivia Wilde. There’s nothing wrong with Hudson, but she is not Wilde. Nobody looks good next to Olivia Wilde. This is Wade’s dilemma.

But there’s a twist. To keep the Kate Hudson analogy going: Even if she’s guaranteed a thankless role, it’s worth it for an actress like Hudson to share the screen with Wilde, because at least she’s onscreen. Same with the Heat. We wouldn’t be watching Wade in May and June if it weren’t for LeBron.

That’s why it’s so unbearable when Wade starts talking like a basketball martyr. “I didn’t want that life anymore,” Wade said last year about his days as the no. 1 superstar. OK, right. He’s getting older, he can’t carry the load by himself anymore, it makes sense.

“I want a different life.”

“This is the life that I choose. Sometimes it’s frustrating because I know I’ve got more, but team success is way more fulfilling than the individual.”

“I’ve totally changed my game. I tried to do it for what I feel is the best for this team. Was it the best for me individually? Maybe not.”

Wade has been saying all this stuff since LeBron got to Miami. When LeBron won his MVP in 2012, it was, “I wanted to give him the opportunity where he didn’t have to think about [me]. It’s kind of like I told him, ‘Listen, I’ll find my way. Don’t worry about me. I’ll be there. But you go out and be the player that we want you to be.'”

“It was probably one of the hardest things I had to do,” Wade added. “To take a step back. A lot of people don’t understand. They’ll say, ‘Why would you do that?'”

But no. Nobody who watches Heat games would ever ask that. LeBron is the best player in the world, and as difficult as it must have been for Wade to sacrifice shots, it was clearly the best decision. Not just for the Miami Heat, but for Wade, the guy who now has two extra championships on his résumé.

There are plenty of reasons Wade is ridiculous and unbearable — the cheap shots, the whining, the flopping, extra-small capris and extra-large pocket squares — but the biggest reason comes back to the two issues above. Not only is he depressing to watch next to LeBron every night, but then the games end and he wants credit for a sacrifice that was fundamentally made out of self-interest.

“Was it best for me individually?” he asks.

Come on. Shut the fuck up, Dwyane.

So yeah: The Heat’s X factor is the guy whose game is declining, the guy who hasn’t been healthy in either of the last two playoffs, and the guy who’s lecturing Kevin Durant about his place in history and is always one breath away from reminding you how much he sacrificed for LeBron. Whatever you think of Wade, he’s the variable that makes this team unbeatable when he’s playing well or leaves them vulnerable when he’s not.

This has all been true for the past two years, and things have worked out just fine for Miami. The problem is that everything gets harder this year. This worked because Miami had just enough to win, and winning makes any lingering tension irrelevant. Nobody remembers that LeBron was comparing this roster to his old Cavs teams in the Eastern Conference finals or that Wade responded by very carefully calling LeBron selfish. Nobody remembers that the Heat were down 12 points in the third quarter of Game 6, came back to lead by three with Wade on the bench, and then lost the lead again when Wade came back with three minutes left in the third quarter.

There are a lot of ways things could go bad for the Heat this year. After playing hundreds of games in the past three years, everyone will be tired. After winning two titles, it’ll be harder to stay motivated on a weekly basis, and easier to get sidetracked with petty nonsense. Guys will get injured. The scrutiny will be outrageous, as usual. And on and on. There’s a reason no team since the ’80s Celtics has made it to four Finals in a row.

That’s why Wade’s ego could matter more this year. That’s why Brian Windhorst had a giant feature in ESPN The Magazine this month about Wade and LeBron’s relationship. If things aren’t working, how much is Wade really willing to step aside? If winning cures everything, losing makes it all twice as complicated.

But here’s where we have to give Wade the credit he deserves. If history is what makes people doubt the Heat this year, then we have to mention Wade’s past, too. Not some babble about sacrificing for LeBron or putting his ego aside for everyone else’s sake. No, Wade deserves credit because he’s so hypercompetitive that he recruited his biggest rival to come take over his city. He deserves credit because even if he hates it, he has always been savvy enough to see the bigger picture and realize when a lesser role is what’s best for him, and then he can actually play that role. And even after all the injuries and all the adversity and all the reasons Wade should’ve been rendered irrelevant, he never stops producing when it matters. That part of Wade’s game is incredible.

Usually it’s a cliché when we say a guy “comes up big in big games” or something like that, but Wade has done it so many times that it’s impossible to argue with the evidence.

As he struggled during last year’s playoffs, I wrote this: “Maybe Wade will stop producing and the Pacers can still shock the Heat. Maybe he disappears in the Finals and the Spurs steal a title. Wade’s just old enough to keep us guessing. That’s what makes him the most fascinating player we have left.”

From there, Wade continued struggling and fossilizing in real time, ruining the Heat’s offensive rhythm, settling for awful jumpers. But there were three exceptions in all this. Game 7 against the Pacers, when Wade came up huge with 21 points and nine rebounds and helped turn it into a blowout by halftime. A crucial Game 4 in San Antonio, when he delivered 32 points and six assists. And Game 7 of the Finals, when he poured in 23 points and 10 rebounds.

Game 6 wasn’t great, but the next three biggest games the Heat played in last year’s playoffs were Wade’s best games, and all Heat wins. This isn’t coincidence. This is what Dwyane Wade does.

His place in history? He helped engineer the most insane power play we’ve ever seen in the NBA, and then he helped make it work. He’s been a Finals MVP, and when he was great he was one of the three best players in the NBA. He’s been the face of the Heat for a decade, and while Wade was never quite as gifted as someone like Kobe, if you put their résumés side by side, Wade holds his own. He has maxed out his talent better than maybe any superstar we’ve seen in the last 20 years.

The odds are stacked against the Heat this year. Because of what history has shown with teams who’ve been to three consecutive Finals, because we’re maybe three months away from weekly speculation about where LeBron goes next summer, because the East is better than it has been since LeBron and Chris Bosh got to Miami. And really, because Wade will probably get injured again, and the partnership with LeBron could get very complicated as the rest of the adversity wreaks havoc on the season. Wade is at the top of the list for people who don’t think Miami will three-peat. Altogether, it’s hard to argue with the skeptics.

LeBron will make the Heat title contenders all year long, but if you’re choosing between Miami and the field, the field is a better bet for the first time since 2010.

But before you take the field, remember Wade’s place in history. Remember the 2006 comeback in Dallas, remember the Pacers series in 2012, remember the most recent Finals. Remember that the barometer for this Heat team has always been the guy we’ll remember for his supernatural knack for winning big games more than any individual skill. The guy who has spent his entire career defying odds and delivering deathblows right when everyone was digging his grave. That’s Wade, not LeBron.

If you ask me why I’m picking Miami to win everything this year, I think it’s because I can’t imagine a scenario in which Wade doesn’t give LeBron just enough help to make us all look stupid. It has happened too many times.

That’s the thing about great villains. You hate them, but you never stop fearing them.