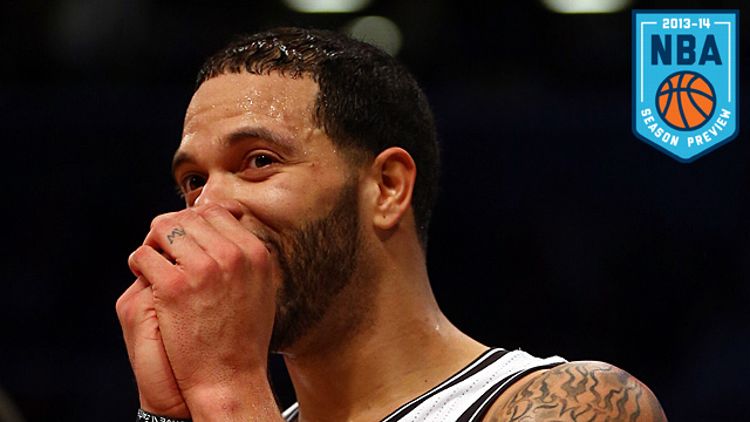 It was late in the third quarter of a Game 1 blowout in Brooklyn. The Nets were scorching their depleted visitors from Chicago. Carlos Boozer set a screen along the left wing to free up Luol Deng, who snuck past Gerald Wallace and attacked the middle of the court. As Deng dribbled toward the free throw line, the right hand of Deron Williams suddenly intruded. In one strange but cohesive motion, Williams snatched the ball, spun around, and commenced a one-man fast break. Four dribbles later, Williams arrived at the opposite goal and elevated. What happened next was surprising to a lot of us — especially those who had watched Williams closely all season long.

Nets broadcaster Jim Spanarkel was jolted: “Wow! We have not seen that from him … Deron Williams taking off and making a statement all in one drive to the basket, showing that his health is there, his ability to get up, and he looks strong and confident.”

They don’t say that when most NBA players finish a fast break, but Williams isn’t a normal player — he’s a max contract point guard in the prime of his career who plays for one of the league’s most high-profile teams. And on top of that, he had a bizarre year last season. He started off horribly, his coach got fired, and he finished incredibly strong.

Last year, Williams once again put up close to 20 points a game, but how he got those points was a little different. He relied more on 3-pointers last season and much less on attacking the basket. In fact, since joining the Nets, he has become far less aggressive; he spends less time penetrating and more time behind the 3-point line. His new coach, Jason Kidd, exhibited a similar transformation during his career. The shift is evident in Williams’s numbers. Last season, he only averaged 8.7 2-point attempts per game, the lowest amount since his rookie year; he also only averaged 4.7 free throw attempts per game, the lowest since his second season. Meanwhile, he set a career high in 3-point shots, taking 447 — that’s a lot, you guys. 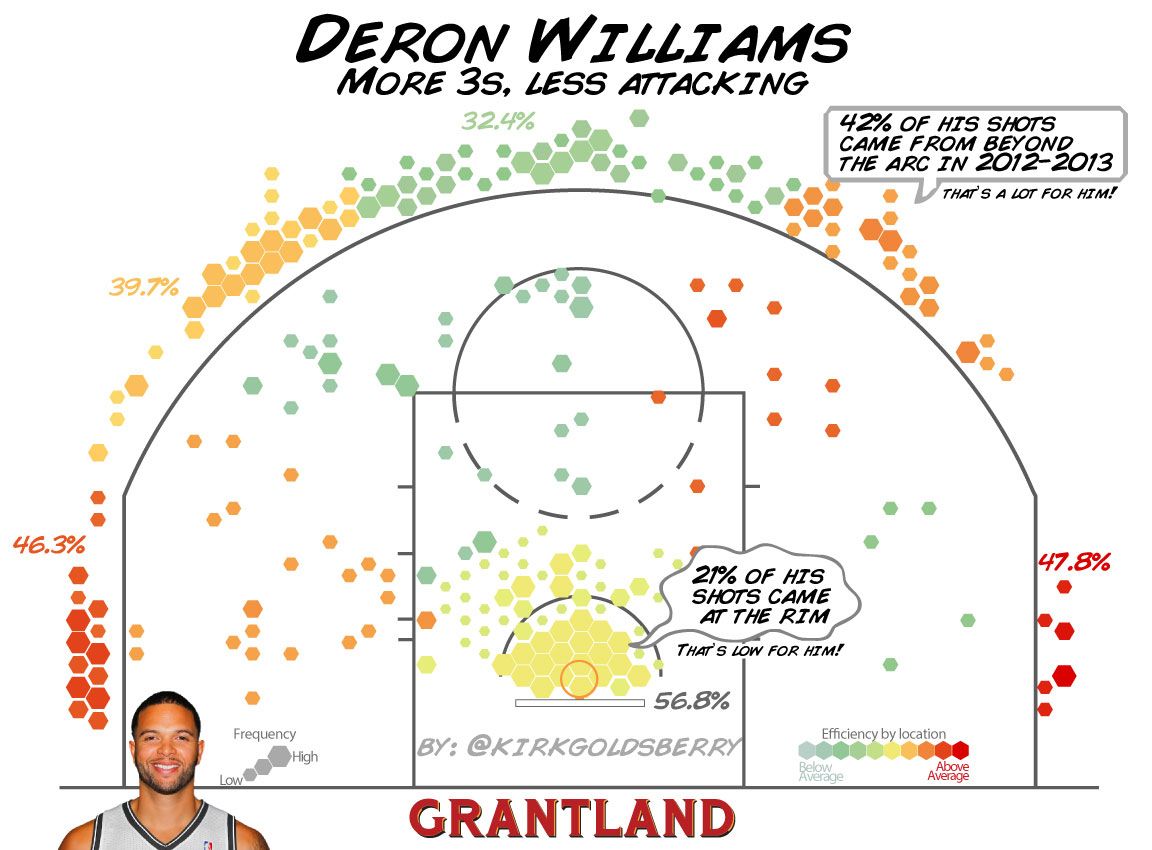 I wrote about Williams in January, just a few months into the Brooklyn era. The piece focused on the troubling patterns in Williams’s numbers, specifically his decreased tendency to attack coupled with an increased reliance on mediocre outside shooting. Back then, Williams was headed toward the worst season of his career, only a few months after he signed a $100 million contract. All the signs pointed to Williams’s new deal being a bust. Then something remarkable happened — the good Deron Williams showed up and turned that narrative on its head.

It was as if he had a New Year’s resolution to stop messing around and start dominating. His numbers before New Year’s Day were atrocious; his numbers after were great. Simply put, it was one of the most drastic midseason turnarounds in recent NBA history.

The improvements were particularly evident in his jump shooting. Before January 1, 69 NBA players had attempted at least 100 3-point shots. Williams was the fourth-worst of the bunch, converting a lousy 30 percent of his attempts. (Only Monta Ellis, Bradley Beal, and Shannon Brown were worse. Williams was slightly worse than Byron Mullens. Ouch.) After January 1, he was one of the top 20 long-range shooters in the league, making 42 percent of his 287 3-point attempts and outshooting players like Steve Novak, Klay Thompson, Kevin Durant, and Ray Allen. 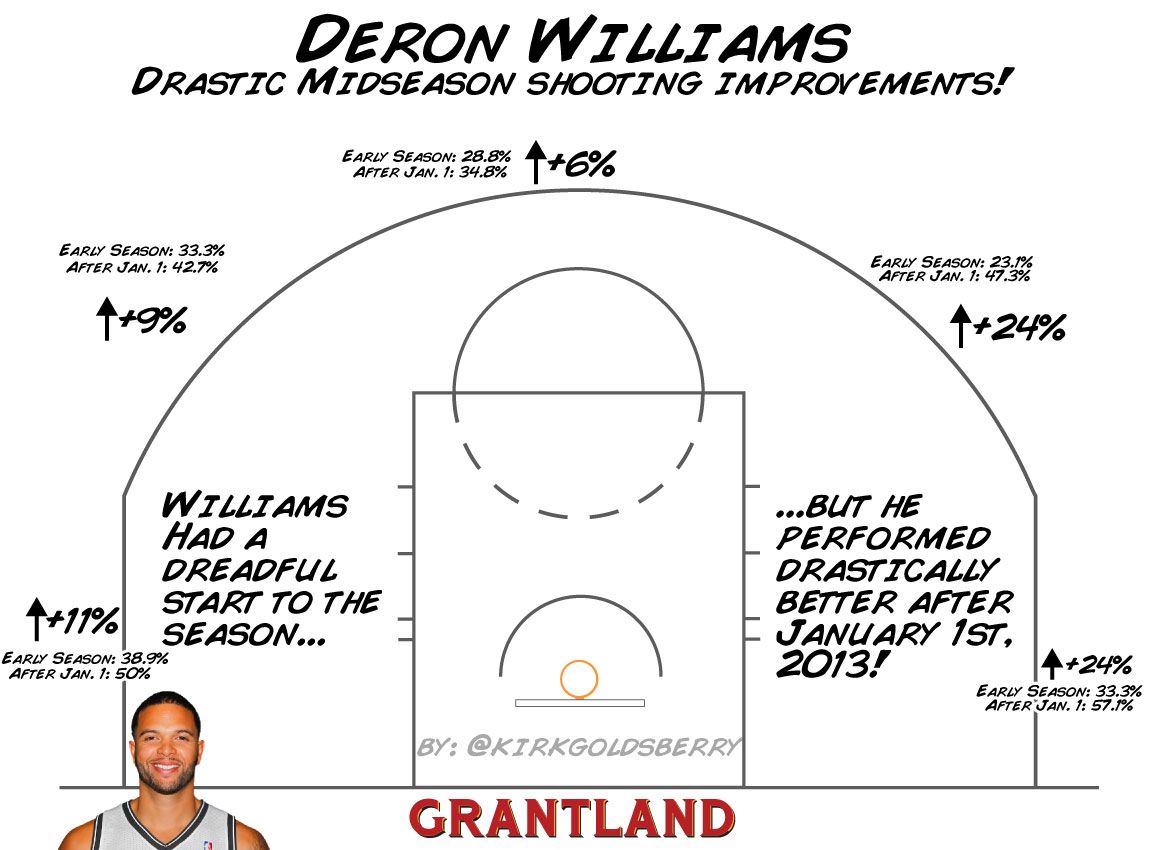 What happened? In part, Williams was energized by a coaching change; Avery Johnson was fired in late December, and P.J. Carlesimo took over. But more importantly, Williams got healthier as the year progressed. He lost weight and his aching wrist healed up. He played with a sprained right wrist for the first few months of the year, and that injury was likely responsible for his atrocious shooting numbers. Williams used the February All-Star break to detox with a juice cleanse (hippie!) and to receive cortisone shots and that newfangled platelet treatment on his ankles. All that stuff worked together, the real Deron Williams stood up, and the Nets were a much better team.

Williams was Brooklyn’s X factor last season, and that won’t change anytime soon. With the drastically altered lineup this year, Williams seems poised to be the playmaking rising tide that lifts the scoring boats of his elite teammates. When the Nets acquired Kevin Garnett, Paul Pierce, Jason Terry, and Andrei Kirilenko during the offseason, NBA observers immediately began wondering about “chemistry.” That is a valid concern (2013 Lakers, etc.), and from a tactical perspective, the burden of making sure Brooklyn’s new pieces work together falls squarely on the shoulders of the point guard.

It’s obvious the Nets are going to be very much improved on defense. In Garnett, they acquired one of the best defensive player-coaches in NBA history. If he remains healthy he will be a force in both defensive tactics and spirit. The Nets need Williams to provide similar leadership and orchestration on the other side of the floor. On paper, the Nets now feature a sturdy array of scoring talent, but talent on paper does not guarantee wins. Winning also requires cohesion and effective schematics (see: Mike D’Antoni, 2013).

On offense, the Nets have the potential to space the floor better than almost any team in the league. Their fleet of scorers each brings unique skills to the table, and there are few redundancies in their hot spots. As a distributor, Williams will have a mighty ensemble of options to choose from. Garnett is one of the best pick-and-pop players in the league. Pierce can still knock down above-the-break 3s at a high rate. Brook Lopez is one of the league’s best interior scorers, and Joe Johnson is more than capable from the corners and wings. 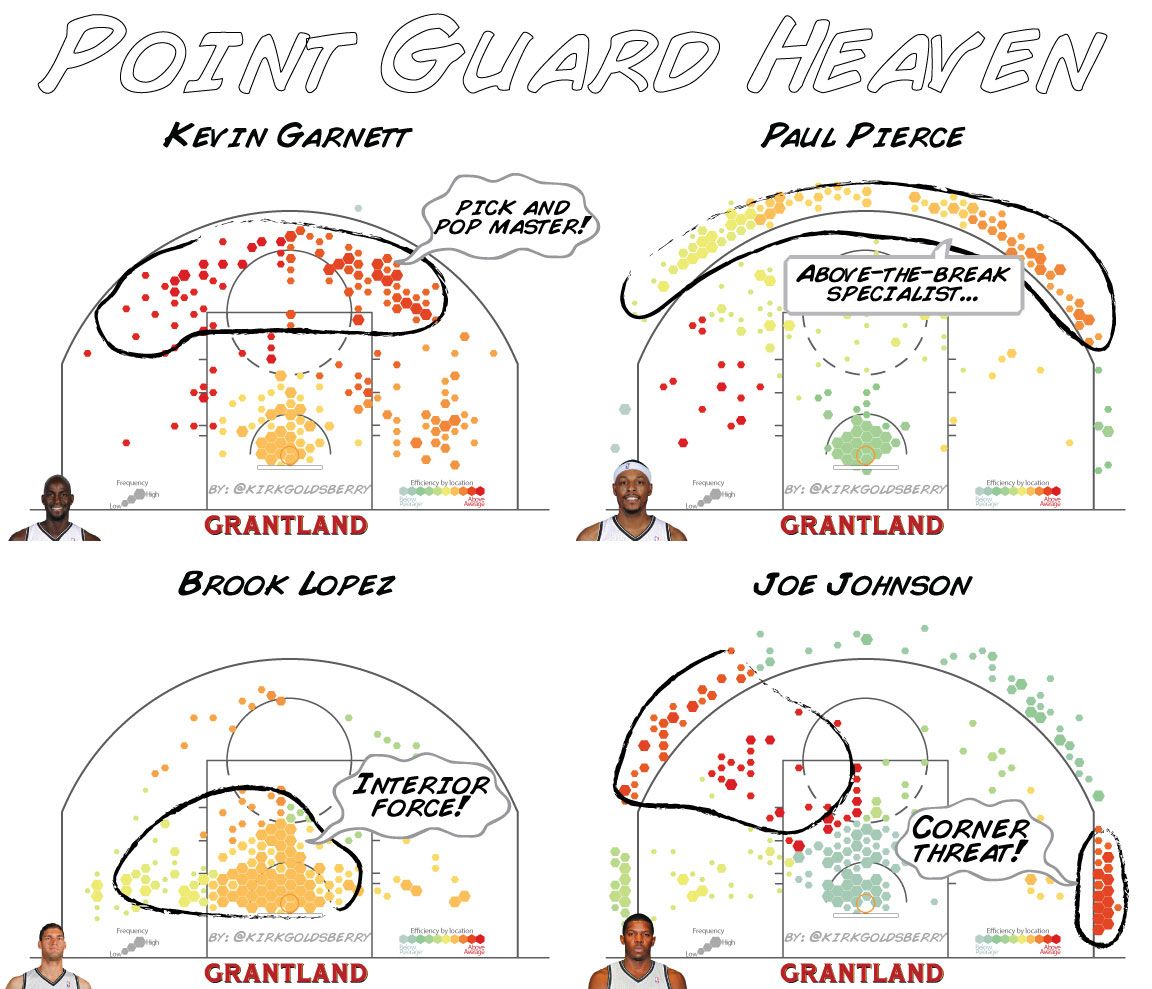 Kidd and his staff need to design sets that get these players good looks in the right spots; Williams needs to execute them. A lot of the key actions will start with Garnett’s famous screens, which will free up Williams to create opportunities for himself and his teammates. If he plays to his potential, it’s likely that Williams’s assist numbers will soar this season. He only averaged 7.7 assists per game last year, which was very low for him. But this year, more of his passes will land in the hands of great scorers. It will be up to Williams to attack the shape of the defense, create those passing angles, and deliver the basketball to his shooters. For this reason and because of his inconsistent health, he is the Nets’ greatest X factor.

It’s still hard to characterize Deron Williams as a player. It’s tempting to call him that intense, great shooting point guard who we saw at the end of last season. But the truth is murkier than that. Williams can only go as far as his body takes him, and while his recent acknowledgement of last season’s weight issues was an encouraging sign, his ankles remain a serious concern. He has already missed games this preseason, and he may not be ready in time for the Nets’ season opener at Cleveland.

At this stage of his career, Williams remains enigmatic — the highs have been high, but the lows have been low. At his best, he has been undeniably one of the top-tier point guards in the NBA — this is why he was on that gold medal team in London. At his worst, he has been overweight, difficult to coach, injury-prone, and trade-worthy.

Still, the past is the past and this season is looking very promising for Williams and the Brooklyn franchise. If he can get healthy, there’s a good chance we’ll be watching him play deep into May and perhaps even June — months when he’s usually on vacation. This could be the breakout season for both Williams and the Nets. The challenges involve “making it work” and “keeping everybody happy” — those are good challenges to have in the NBA, but they’re still challenges. If the Nets overcome them, it will be because the good Deron Williams showed up and orchestrated. If they don’t, well, another coach will probably get fired.