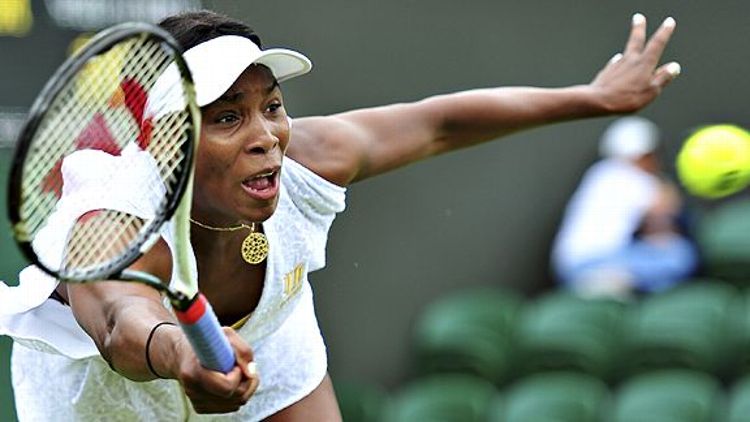 It’s already raining, the Williams sisters are scandalizing the All England Club, and a British player was the first to be knocked out in the opening round. In other words, it’s the same old Wimbledon. Here are a few facts from the first day of the famous fortnight.

THE WILLIAMS SISTERS CONTINUE TO BE CARICATURES OF THEMSELVES: The return of the Williams sisters — Venus from a “hip injury,” Serena from a series of murky calamities that included surgery for badly lacerated feet (from broken glass at a nightclub in Munich, obviously) and, far scarier, blood clots in her lungs — has already been exactly as blithely theatrical as you’d expect. Serena, discussing her level of physical readiness, casually told reporters: “My butt’s way softer than it normally is.” Venus, meanwhile, was in vintage form in her opening-round match yesterday, which is to say: she arrived to the court calmly and late, easily dispatched Akgul Amanmuradova 6-3, 6-1, and raised eyebrows with a self-designed confection best described as “toga meets romper.” Or, as she put it: “I call it a jumper. Jumpers are very now, as is lace. The shoulders have a lot of draping, which is also in the moment. It’s a trendy dress. I’m really into zippers, so it has like a focal point of a zipper in the front. It’s just fun. The back is like a cut-out or like a peek-a-boo.” Shine on, you crazy diamond.

BUT IT STILL SEEMS LIKE IT’S THEIRS TO LOSE: The return of the Williams sisters has exposed some of the awkward fault lines in women’s tennis and reignited debate about the future of the WTA. Serena and Venus tend to ditch most minor tour events for reasons both legit and manufactured, reemerging just in time to compete in (and, often, win) only the majors. Wimbledon’s top-seeded player is the opposite: Caroline Wozniacki has never won a major title, yet stands atop the world rankings by having dutifully adhered to, and excelled within, the WTA’s grueling tour schedule. Still, who would you rather have money on in a Wimbledon elimination match: her or Serena, however rusty? No. 2 seed Vera Zvonareva, who won her first-round match yesterday, beat Serena at the recent Eastbourne tournament, which means good luck surprising her this time. Other female contenders — ladies like French Open champion Li Na, Marion Bartoli, or Petra Kvitova — similarly fail to inspire much fear. Venus is much less of a threat, seeded 23rd — but she was seeded 23rd in 2007 and went on to win. Since 2000 only two women other than Serena or Venus have won Wimbledon: Maria Sharapova in 2004 and Amelie Mauresmo in 2006. The sisters have dominated while practically thumbing their noses at the WTA all the while.

THAT GENTLE BREEZE WAS A COLLECTIVE BRITISH SIGH OF RELIEF: Poor Andy Murray. The tournament hadn’t even begun and already the headlines were hedging: “Wimbledon 2011: Andy Murray leaves his public unsure.”
“Murray’s fight for hearts and minds as Wimbledon begins.” The beginning was very nearly the end for Murray yesterday, as he got himself into a bit of a jam against Spain’s Daniel Gimeno-Traver. With all other matches postponed due to rain, Murray’s was held under Centre Court’s retractable roof, making everything feel like even more of a fishbowl. He dropped the first set 6-4 in front of a patriotic and horrified crowd, and survived several tense points in the second before pulling away to an increasingly confident 4-6, 6-3, 6-0, 6-0 victory.

I WISH I HAD A TRANSCRIPT OF THAT CONVERSATION: Rafael Nadal dropped four games yesterday in his first set against American Michael Russell before ultimately winning 6-4, 6-2, 6-2. That this felt like a “rough” or “slow” start for Rafa speaks to how high our standards for him have become. And he clearly feels the same way: After running out of gas in the quarterfinals of the Queen’s Club on June 10 and falling 6-7 (3), 6-4, 6-1 to Jo-Wilfried Tsonga, an anguished Nadal personally called up the tournament director Chris Kerdone to apologize. “I must admit the telephone call came as something of a surprise,” Kerdone said.

I WISH I HAD A TRANSCRIPT OF THAT CONVERSATION, II: Look, it’s Pippa Middleton talking to her family friend, Tim Henman’s mom! God save everyone.

FAIL, BRITANNIA: The British have, to use their penchant for understatement against them, a bit of a complex about their homegrown tennis talent. So it was so very typical that the first player to get knocked out of the tournament yesterday was 25-year-old British wildcard Katie O’Brien. Even more humiliating was the way she went down: to a woman 15 years her senior, the 40-year-old Kimiko Date-Krumm, best known for blast-from-the-past matches against names such as Steffi Graf, Monica Seles, and Jana Novotna in the early ’90s. Date-Krumm, who spent 12 years in retirement before returning in 2008, won the first set 6-love and eked out the second 7-5 to become the second-oldest woman in the Open era to win at Wimbledon. (Martina Navratilova won a match at 47 in 2004.) In other potentially grim news for Union Jack wavers, Daniel Cox dropped his first set to a “giant Ukrainian” before play was suspended by rain.

HISTORY THAT SHOULD NEVER BE REPEATED: Last year, as you may recall, John Isner and Nicolas Mahut played a match at Wimbledon that turned into some sort of sick joke, spanning 183 games and lasting for more than 11 hours over the course of three days before Isner finally won 6-4, 3-6, 6-7 (7), 7-6 (3), 70-68. Yes, that last one says seventy to sixty-eight. There were laughs all around when, this year, the pair was randomly matched up in the first round. (The odds were less than one percent, according to mathmaster Jon Wertheim) But the players weren’t amused: On Friday, when the draws were announced, Isner sent Mahut a text message that simply said: ” :( “. Whimsical on the surface, the story is actually kind of quietly devastating: Mahut, in particular, was so physically and emotionally scarred by the slog that he plunged into a many-month funk Even Isner calls the rematch (which, mercifully, will not take place on Court 18) “almost cruel.”

I ONLY WATCH IT FOR THE LIVE BLOGS: Wimbledon has proven the British to be truly unparalleled tennis live bloggers, and I say that with the ultimate respect. If there was one good thing to come out of that gruesome Isner-Mahut match last year it was the attention it drew to The Guardian‘s brilliant Xan Brooks, whose increasingly desperate and delirious account of the never-ending match was more entertaining than the tennis itself. Brooks is back again this year, and between his droll, cheeky musings and the ones over at the BBC (those little icons just kill me) you can know everything going on around Wimbledon without even watching. (Sample dispatch from yesterday’s Andy Murray match, from the BBC’s Tom Fordyce: “Did I just see a chap in the crowd knitting? Perhaps he was only worrying the edge of an old pullover, tugging out strands absentmindedly with each Murray wobble. Hold straightforward, match anything but.”)

WHAT THEY’RE QUEUEING UP FOR TODAY:We’ll see just how rusty Serena is when she takes the court for her first-round match against Aravane Rezai. Maria Sharapova, Caroline Wozniacki, and Li Na, among others, will play their first games as well. Novak Djokovic’s unbeaten streak and attendant momentum may have been stopped when he was beaten by Federer in the French Open, but the fact remains that he’s 9-1 this year against Nadal and Federer and has the talent to spoil things for either one. He’ll play France’s Jeremy Chardy today, after spending yesterday loosening up via hula hoop. Federer, the subject of features in both the New York Times and the Wall Street Journal, will face Mikhail Kukushkin. The contest between Ana Ivanovic and Melanie Oudin has the potential to be compelling, while the infamous Court 18 will play host to a nice slate of matches, including Andrea Petkovic playing Stephanie Gacon, Juan Martin Del Potro trying to battle back in the second set in a game that was postponed due to rain, and a matchup between Marcos Baghdatis and James Blake. Retro!