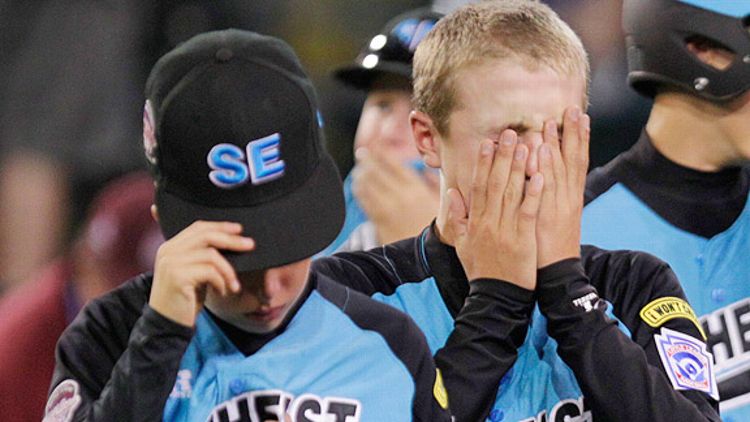 I don’t want to brag or anything, but my hometown of Brownsburg, Ind., produced teams that qualified for the Little League Baseball World Series in both 1999 and 2001, when I was 12 and 14 years old, respectively. Now, before you ask, I should mention that I wasn’t on either of those teams, and neither of them really had any measure of success once they got to South Williamsport, Pa., but that doesn’t matter to me. What matters is that I went to middle school and high school with a bunch of kids who played in the Little League World Series, and solely because of that I consider myself to be a bit of a Little League World Series expert.

As such, I feel obligated to mention that you’re seriously missing out if you aren’t watching this year’s tournament, because the entire event is must-see-TV for a few reasons.

Good, old-fashioned values
It might sound corny, but watching the Little League World Series somehow makes you want to become a better person. That’s because, from what I can tell, that area is one of the most genuinely wholesome and innocent places on earth, as evidenced by the fact that hundreds of locals volunteer every year to put on the event and the majority of people who go to these games actually get excited and dance when “Cotton Eyed Joe” is played over the intercom. (It goes without saying, but you have to either be a DJ at a middle school dance or an entirely unashamed optimist to get enthusiastic about “Cotton Eyed Joe.”) Plus, the players have so much sportsmanship that they’ll sometimes high-five an opponent as he rounds the bases on a home run trot, as if they have no idea that that home run could potentially eliminate them from the tournament and abruptly end what will surely be the pinnacle of their lives.

In fact, the only ways the Little League World Series could possibly be any more wholesome would be if your grandmother and Mr. Rogers served apple pie at the concession stands, that kid from Jerry Maguire played right field for all the teams, and Bob Ross set up an easel on the hill beyond center field and taught everyone how to paint happy little trees using nothing but a palette with a few globs of paint on it and what appeared to be a steak knife. The place oozes with positivity, and you can’t help but feel as though everyone’s collective attitude is at least a little bit infectious.

I mean, all the kids wear patches on their jerseys that say “I Won’t Cheat!” for god’s sake. It might be tacky, but I have no shame in admitting that that alone is almost adorable enough to inspire me and make me forget that within the next five years most of these kids are either going to start taking a ton of steroids to try to get to the big leagues or drop out of high school and start dealing drugs.

You can play along as you watch
The most obvious way to do this is to contemplate how far you would crush a homer off the dopey pimple-faced kid with braces who somehow keeps striking everyone out with his weak, 54 mph fastball. Or, every time a kid with facial hair blasts one out of the park, you could go the opposite route and think, “Pshh … give me a shot at that kid. There’s no way that scrawny punk could handle my heat.” And, of course, you can always get creative and make up your own drinking game. Here are a couple of rules to start off with: Take a shot for every run scored. Finish your beer every time you get the overwhelming feeling that a parent is living vicariously through his or her kid just a little too much.

But my favorite game is something I like to call “Will the team’s best player be playing in the majors or selling meth in 15 years?” Here’s how it works. First, you have to fully scout out each team’s best player so you can make a well-informed decision. And by “fully scout out,” all I really mean is that you have to look at a player’s parents when the camera shows them in the stands and make note of whether the player’s dad is wearing a sleeveless shirt. Sure, it helps to know what the player likes to do in his free time or if he has a badass name, but really, once you’ve established whether or not his dad wears sleeveless shirts, you’re good to go.

From there, you make your decision &#8212 15 years from now will the kid be playing in the majors or will he be selling meth because he dropped out of high school and his life fell apart after everyone else finally hit puberty and caught up to him physically?

And make no mistake about it — I’m pretty sure that each team’s best player does one or the other. There is no in between with this sort of thing.

It’s constant entertainment
The big thing to remember here is that the games are only six innings long, so there really isn’t a lull during the middle. Also, every now and then you get that rare moment when a 4-foot-9 kid steps into the batter’s box against a 6-foot, 165-pound kid who can throw almost 80 mph, and you realize that there’s a legitimate chance you are about to witness a manslaughter on live television. But more than anything else, what makes the games so entertaining is that the kids are all 12, which means that all of them are prone to a complete mental meltdown at any point.

During just about every game, it’s a given that at least one kid will start crying, typically because he struck out or messed up on defense. (One time I was watching a regional game, and a kid fell to the ground and started crying as the play was still going on, immediately after the ball went between his legs.) As hard as it might be to hold in your laughter when this happens, I suggest you find a way to do just that for two reasons. First, you look like a heartless monster for laughing at little kids who are crying during the biggest moment of their lives. And second, what happens after these initial screwups is a much bigger payoff anyway. That’s because when a kid screws up so badly that tears actually materialize, often times everything snowballs and the individual player, or occasionally even the whole team, just completely starts sucking balls.

For example, after an outfielder strikes out in the top half of an inning and cries about it, it’s entirely plausible that in the bottom half of the inning he could drop a routine fly ball, launch the ball over one of the dugouts as he tries to throw it back into the infield, and then bury his face in his glove and start violently sobbing. And after that happens, it’s not out of the realm of possibility for the entire team to somehow record four or five errors on the very next play. No lead is ever a safe lead in the Little League World Series because these mental collapses are always looming.

At the major league level, these error-laden games might be painful to watch, but I love watching them in the Little League World Series because it’s pretty entertaining to not have any clue what’s going to happen next. Either that or I like watching the kids screw up because I have revisionist history and treat these errors as a reminder that I was so much better than all of these kids when I was 12. My guess is that it’s probably more of the latter.

So maybe watching these games doesn’t make you a better person after all. Oh well.

If you somehow still aren’t sold that you should be watching the Little League World Series, consider this one last point: Because the kids are athletic 12-year-olds, it can be assumed that most of their moms are physically fit women who are in their mid- to late 30s or early 40s. Translation: The Little League World Series is crawling with MILFs. So … yeah. I rest my case.