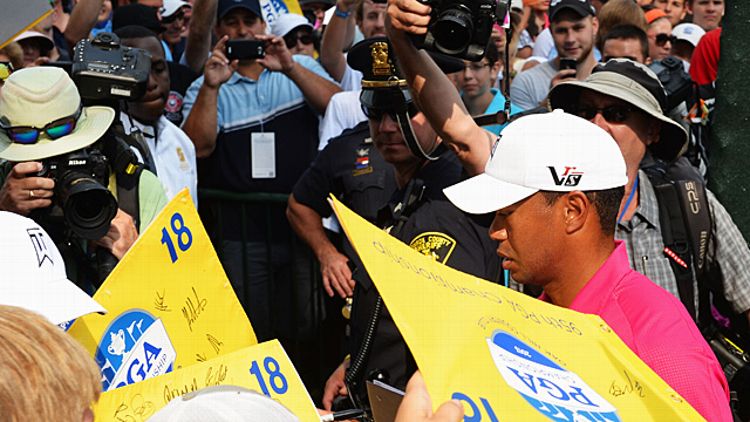 Normally I write a “top 10 contenders” post before each major, but after witnessing Tiger Woods’s recent form, I decided it wasn’t necessary. I’m convinced he’s going to end his long drought and win this year’s PGA Championship, “Glory’s Last Shot,” per the dramatic men on television. So rather than giving token lip service to nine other golfers, let’s focus on the top dog. In my “Conversations With an Idiot” post Monday, I engaged in the stupid debate about whether Tiger was “back,” and concluded that the answer was an unequivocal yes. Why? Because he’s no. 1 in the world rankings, has won five tournaments in 2013 while nobody else has won more than two, leads the PGA Tour money list, and tied a course record at Bridgestone last weekend with a 61, which also tied his own personal best as a pro.

But those reasons don’t even make today’s list. They’re mere stats, and while the numbers may indeed point to a total Tiger-fest this weekend, I want to highlight his renewed killer instinct. See, this is a special time. Tiger Woods is on the prowl, the attack, and the warpath — the rare aggression trifecta. Like his namesake, he’s an unpredictable creature of the wild, and he’s about to unleash himself on Oak Hill. Here are 12 reasons why he’s about to win his 15th major.

When the “Golden Bear” won his first 14 majors, that was a direct insult to Tiger … before Tiger was even born. Then he won four more when Tiger was a defenseless child. You don’t do that to a kid, much less a pre-kid. Tiger is on a slow quest for revenge, and it doesn’t end until he wins his 19th major. Or dies, if you want to get super dark about it.

Hey Phil, Tiger thinks, as he sharpens his 9-iron with a bowie knife, sending sparks everywhere. How about you stop smiling for two seconds?

In the sense that it’s a golf course with 18 holes and Tiger is a fire-breathing, pin-hunting machine who doesn’t give a good goddamn where he plays right now.

4. It will probably rain on Thursday

Tiger’s favorite movie scenes are the ones where someone commits a horrendous crime in the rain and then looks up at the sky, clenches both fists, and laughs crazily while the camera zooms upward.

5. When he experiences a down moment, he can draw strength from the memories of all those times he’s decimated Sergio Garcia in public

And then flash him a knowing grin that Sergio will obsess over for a minimum of four months.

6. It will probably be sunny on Friday, Saturday, and Sunday

Tiger’s second-favorite movie scenes are the ones where the same exact thing happens, except it’s not raining.

Response: Wait, he’s a spirit animal for who?

9. Oak Hill is in Rochester, New York, which is known as the Flower City

He’ll handle him easily, by whispering “Love is an illusion” just before he hits.

Bradley still uses the soon-to-be-illegal anchored putting stroke. Again, this is child’s play for Tiger. Every time Bradley putts, he’ll break out a classic reference and shout, “HAS THE WHOLE WORLD GONE CRAZY? AM I THE ONLY ONE AROUND HERE WHO GIVES A SHIT ABOUT THE RULES? MARK IT ZERO!” He’ll then slap-five with every frat boy in the gallery.

12. The sight of Tiger’s former caddie Steve Williams yukking it up with his new best friend Adam Scott

This will make Tiger go blank with rage. The last time he thought about it, on the driving range Tuesday, he went into a fugue state and ended up on the 14th hole of a Buffalo municipal course sinking 50-foot putts, one after another, while humming old church hymns. It’s just another layer to the revenge narrative.

On a serious note, Tiger is playing amazing golf and I truly believe it’s his time to end this major drought and shut his critics up for good. He’s going to prove that he’s not an out-of-control hedonist (Johnny Football), or a former icon who lost his skill (Tim Tebow), or an all-time great whose legend is tarnished because of a few stupid mistakes (A-Rod). He’s Tiger Woods, and he’s the raging champ.