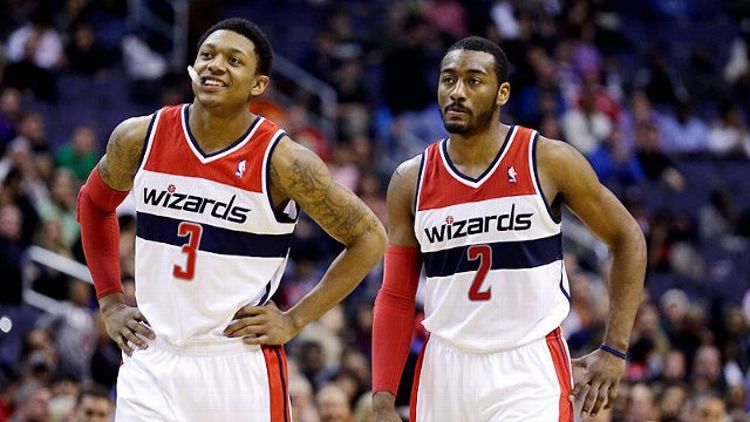 Pretty much everyone who follows basketball, including most Wizards fans, thought last Friday’s Wizards trade was a desperate move made by a GM trying to save his job, forfeiting the future at the expense of a fairly underwhelming present.

But as a Wizards fan, I have to explain why I liked the trade.

More on the Gortat Deal

Zach Lowe on why the trade doesn’t work for the Wiz in the long-term.

It starts with the photo above. The Wizards’ future as contenders depends entirely on Bradley Beal and John Wall. They are the stars, and whether they turn into superstars is what’ll shape the direction of this team over the next five years. This is why making the playoffs and putting together a winning team is not just a stupid Ted Leonsis PR campaign. The playoffs are where Beal and Wall take the next step.

If this team wants to be taken seriously, it starts with Wall and Beal going from stars to superstars. And nobody turns into a superstar on a 10th seed.

Grabbing someone like Mitch McGary in the middle of next year’s first round isn’t going to change the face of the Wizards, but Beal and Wall playing on a winning team all year might. They’ll get better, they’ll experience the playoffs, and then who knows? The best hope for this franchise is their young stars turning into real NBA threats, the Wizards turning into a team other players respect, and then the front office improving things through free agency over the next few years as failed rookies and pricey veterans come off the books.

Speaking of the front office … If you’re a Wizards fan who hates this trade because it could save Ernie Grunfeld’s job next summer and ultimately lead to more of the decision making that has handicapped this franchise for years, that’s completely fair. But Grunfeld has been with the Wizards for 10 years. His contract expires this summer, and he’s had a pretty healthy run. If making a change is what’s best for the team going forward, making the playoffs changes nothing. And if Ted Leonsis isn’t perceptive enough to separate short-term gains from the big picture, the problem isn’t really Ernie Grunfeld, is it?

Did Grunfeld get as much as he could’ve for Okafor and the first-round pick? I have no idea. Maybe they could’ve stolen Asik, but probably not. For now, I think I’m good with this. Because Wizards fans haven’t seen a team win 40 games since 2007, and because winning now serves the long-term goals better than another year in the lottery would. Young players improve more when the team’s actually playing for something.

Marcin Gortat isn’t amazing on his own, but next to the alternative — platooning Al Harrington and Kevin Seraphin at power forward all year — Marcin Gortat is pretty amazing. He’ll be great screening for Wall and Beal, he’ll fill a giant void in the starting lineup, he’s got a phenomenal nickname, and most importantly, his presence removes an unnecessary degree of difficulty for the Wizards’ two best players.

That has been their biggest problem the past few years. This team has been rebuilding around young players for years, putting them in hopeless situations, and then turning around a few years later wondering why they never turned into stars. This is a mistake that’s common with lots of bad teams, but the Wiz have perfected the formula.

Maybe this will all look stupid a year from now, but I’m glad the team’s switching things up. Gortat’s not a permanent fix, there are no indispensable building blocks on this roster beyond Beal and Wall and maybe Otto Porter, but there’s flexibility for the future, and the present is a lot less hopeless than it looked a week ago.

As soon as Okafor got hurt, Wizards optimism cratered, and a seventh or eighth seed became the best-case scenario. Now? They’ll go as far as Beal and Wall can take them. That was always true for this year and beyond, but with Wall and Beal surrounded by a real starting lineup, now they actually have a chance to go somewhere.