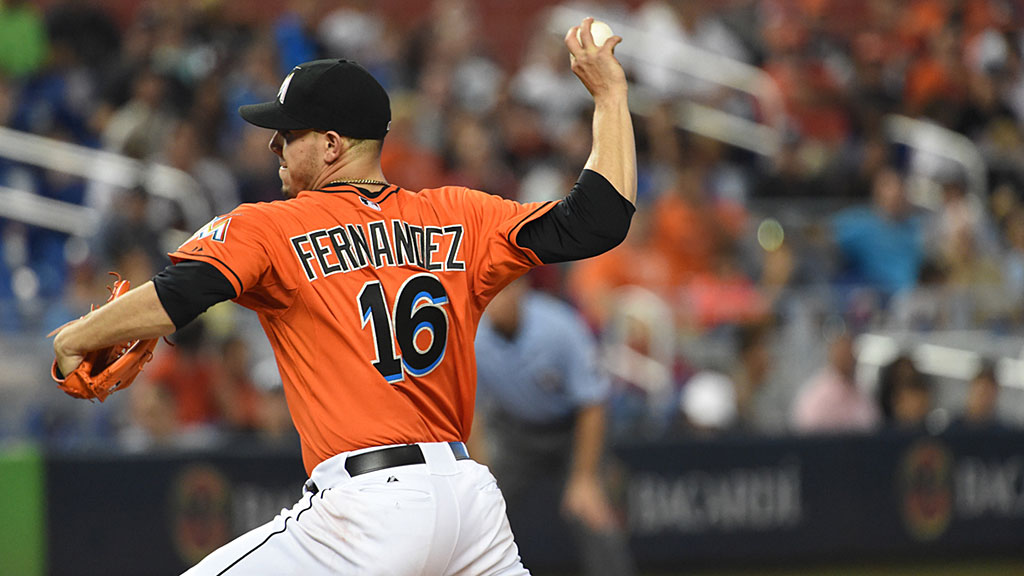 If all goes as planned, Marlins starter Jose Fernandez will be undergoing Tommy John surgery on his torn UCL Friday morning. Fernandez’s injury — likely suffered during the fifth inning of his final start — has left the baseball world in mourning this week. I’m no exception; I put Fernandez on the DL in the Grantland fantasy baseball league and replaced him with Bartolo Colon, which is like replacing a Porsche with a pushcart being pushed by Bartolo Colon.

Fernandez’s injury marks the latest and most notable in a string of season-ending injuries suffered by pitchers this calendar year; he joins the likes of Matt Moore, Kris Medlen, Patrick Corbin, and Jarrod Parker on the shelf. Perhaps because Fernandez was so dominant before the injury, his UCL tear has marked a serious week of reflection within the community. Bud Selig doesn’t exactly comment on every elbow injury, but he’s called for a commission to investigate the problem.

More so than perhaps ever before, there’s a sense of resignation that these injuries are going to keep happening because nobody knows how to stop them. Neil Paine at FiveThirtyEight did a great job of documenting how sabermetrics has failed to solve the problem, even if it did help identify the problem to begin with. Nobody is suggesting we go back to the days of Dallas Green spitting young arms out like chewed-up tobacco, but outside of our understanding that fewer pitches are better than so many pitches, pitcher injuries remain the sport’s bugaboo. Model franchises like the A’s and Rays were once lauded for keeping their young pitchers healthy, but they, too, have fallen by the wayside. Sports Illustrated’s Tom Verducci even argued this week that the mound should be lowered to help alleviate the stress placed on young arms.

Perhaps there will be some further rule or culture change that helps reduce pitcher injuries. If the mound doesn’t get lowered, maybe college coaches will stop having their pitchers throw 140-pitch starts. Until that sea change occurs, though, teams have to do the best they can under the current system to get the most out of the pitchers they do have while they’re healthy. And that’s where the Jose Fernandez story, strangely, goes from cautionary tale to prototype.

It’s safe to say the Marlins were more aggressive with Fernandez than just about any other team in baseball would have been with a top young pitching prospect. After selling off most of their veterans during their latest fire sale before the 2013 season, the Marlins chose to purchase Fernandez’s contract during spring training, promoting the 20-year-old to the majors before he had pitched above Class A. You could argue that the Marlins made the move to try to create some buzz around a talented young Cuban pitcher in the hope of selling a few tickets, but they are known for being aggressive promoters of minor league talent. Giancarlo Stanton, the team’s other building block, was promoted at age 20, halfway through his first season at Double-A Jacksonville. A 20-year-old Miguel Cabrera helped the Marlins win the World Series in 2003. Dontrelle Willis was up at 21 after six Double-A starts. Even fringe talents like Chris Volstad and Alex Sanabia were up in the majors before they turned 22.

Now, Fernandez was an impressive talent with a bright future; he’d dominated the lower minors at 19, posting a 1.75 ERA in 134 innings while striking out 158 batters and walking just 35. He was ranked fifth in Baseball America’s “Top 100 Prospects” list before the season. Nobody could have realized just how quickly that future was going to come. Fernandez hit the ground running, striking out eight Mets in his debut, and never really stopped. Since arriving in the majors, Fernandez has accrued 7.4 bWAR, the eighth-best figure among pitchers. His FIP- over that time frame is fifth. The only starter who has struck out more batters per nine innings over that timeframe is Yu Darvish. This chart makes it even clearer:

Jose Fernandez was basically the same guy in High-A ball he was in the major leagues. And had the Marlins pursued a more traditional development path with their young starter, the vast majority of these innings before his TJ surgery would have come in the minor leagues. Outside of concerns about starting a young pitcher’s service-time clock, that seems suboptimal. The Marlins obviously couldn’t have known when Fernandez would require surgery, but if there’s no way to guard against a pitcher getting hurt and a pitcher has only a certain number of bullets in his arm before hitting the operating table, a team’s goal should be to make those pitches as important as possible. And that’s accomplished only by getting him to the major leagues.

Other teams were hesitant to promote pitchers of similar backgrounds and got less of a reward. The only pitcher ahead of Fernandez on that 2013 top 100 prospects list was Orioles farmhand Dylan Bundy. Like Fernandez, Bundy was a 20-year-old phenom who had dominated Class A during his first full professional season. The Orioles had given him a cup of coffee during their first meaningful September, but after a subpar spring training, they sent him down to Double-A to continue his apprenticeship. Bundy’s time, as it turned out, was already up; he went on the DL with forearm stiffness that eventually became an elbow injury and led to his own Tommy John surgery without ever throwing a pitch in 2013. Pirates überprospect Jameson Taillon, in the top 20 of that BA list for the third consecutive season, was sent back to Double-A after pitching well in 2012 as a 20-year-old at High-A. He threw 147.3 effective innings in the high minors and was expected to make his major league debut in 2014, but instead suffered an elbow injury in camp and underwent Tommy John surgery in April. The next one up might be Mariners pitcher Taijuan Walker, another top-20 BA guy who took a leap forward at age 20 in Double-A last year but failed to get the call-up; he’s already struggling to recover from a shoulder injury that’s kept him limited to rehab starts and bullpen sessions since March. And this is just one year’s list at one specific level. Consider Matt Harvey, who was a better pitcher at the major league level than he was in 245 minor league innings before tearing his UCL. If there’s no way to keep these upper-echelon pitching prospects healthy or predict when they’re going to break down, their innings might as well come at the highest level.

Obviously, not every pitcher will translate to the major league as well as Fernandez or Harvey. There will be a few Yusmeiro Petits putting up ridiculous minor league numbers, too. But Petit wasn’t seen by scouts as a prospect of the same caliber as those guys; he never made it higher than 46th on the Baseball America list. You wouldn’t want to promote every pitching prospect who looks confident in High-A to the majors, but using a combination of solid performance and scout-driven projection of pitches and skills, it would behoove teams to be more aggressive promoting their better pitching prospects. There’s already evidence that teams are probably too conservative in promoting players; both pitchers and hitters have shirked the traditional growth curve to the point where their skills arrive fully formed upon their introduction to the major leagues before declining, without any of the traditional growth period at the beginnings of their careers.

There are also tangible benefits for the players involved, too. Playing at the major league level allows a pitcher to work with the best facilities available to him in the organization, both on and off the field. The top-level team might not necessarily have the best pitching coach in the organization, but it almost surely has the best medical staff and definitely has the best medical facilities. There’s more information available on hitters. You’ll work with better receivers (especially if you’re a Brewers pitcher).

Perhaps more important in the light of serious injury, there’s the small issue of compensation. Even if a prospect is making the league minimum, he’s going to make far more in the major leagues than he will in the minors. Fernandez is a perfect example. Fernandez has made a combined $1.125 million for his two years in the majors. He likely would have earned a call-up at some point over the last year-plus, but had he remained at Double-A in 2013 and been promoted to Triple-A in 2014, he would have earned a base salary of $18,250. If the Marlins had added him to the 40-man roster before 2014, that figure would have risen to $67,500. In either case, Fernandez made significantly more by working at the major league level than he would have by remaining in the minors. (He did receive a $2 million signing bonus after being drafted in 2012.) If you’re going to blow out your elbow at 22, you might as well pick up a million dollars for doing so. Getting called up early also starts a prospect’s service-time clock, which gets him closer to free agency at a younger age.

There are several young pitching prospects around the league who could have a meaningful impact on the 2014 season with an early promotion. Take 22-year-old Rockies right-hander Jonathan Gray, who was the third-overall pick in last year’s draft. Gray’s struck out nearly seven batters for every one he’s walked at Double-A, and after relying on his fastball and slider in college, his changeup has made enormous strides during his minor league career. The Rockies are a surprising 23-19 this far, and they have the run differential of a 26-16 team. They’re also rolling Franklin Morales and his 5.40 ERA out there as a clear weak link in their rotation. An effective Gray would be worth two or three wins over the remainder of the season over Morales. Isn’t it worth a shot if you don’t know whether Gray will actually be healthy by the time you deem him to be ready? The Mets probably aren’t going to contend, but is it really better for them to leave Noah Syndergaard to play in the high-stress bandbox of Las Vegas? And with prized Royals prospect Kyle Zimmer already on the shelf as a precaution against shoulder stiffness after an impressive 2013, should the Royals be aggressive upon his return and promote him in an attempt to try to claim that long-awaited playoff spot, knowing he might be a month away from seeing his shoulder give way in Double-A anyway? Maybe the lesson to learn from Jose Fernandez is that there’s no time too soon for a pitching prospect.