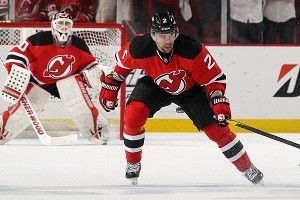 The New Jersey Devils are one of the unforeseen success stories in the East this postseason, and no player is more surprising than Marek Zidlicky.

Just a few months ago, there was little positive to say about the 35-year-old Zidlicky, who started the year with the Wild. In January, the defenseman was mired in a lousy stretch and had been a healthy scratch for three consecutive games on one of the worst teams in hockey. The Wild had a better record with the veteran out of the lineup than with him in it, and Zidlicky chose that moment to voice his complaints about both his ice time and Minnesota coach Mike Yeo.

“I can’t be quiet,” Zidlicky told the Star Tribune. “I think three games healthy scratch, it’s more than just like a healthy scratch. [Yeo’s] put me in this position that I am in right now. It’s not easy for me. It’s good for team probably because the guys played pretty well the last two games, but for me, I did everything [that] he wants me to do. I played like 17, 18 minutes ice time, I play just third, fourth line, I stood on the blue line, I didn’t do anything what I did years before. He said everything I do with the puck and without the puck, it’s wrong. So I have a little different opinion.”

It was immediately clear that the Wild would attempt to trade Zidlicky.

With a year and a half left on a contract with a no-trade clause and a $4 million cap hit, the question was: Would anyone want him?

As it turns out, the New Jersey Devils did, and they were willing to send a lot back in exchange — two players, a prospect, and a pair of draft picks. At the time, the trade seemed like a lopsided win for the Wild. But New Jersey isn’t likely to complain anytime soon.

Zidlicky’s been a key component in the Devils’ remarkably successful power play. With a 20.9 percent success rate, no surviving playoff team can claim to be more potent with the man advantage, and Zidlicky is the Devils’ second most-used player (behind only Ilya Kovalchuk).

“He brings us big minutes,” DeBoer said. “For me, it’s not even the offensive production he brings to the power play. It’s how he defends and how tough he is in corners in our end of the ice and [he] plays against other teams’ best players most nights. He’s valuable in a lot of different areas.”

At even strength, Zidlicky is averaging more than 20 minutes per game. With him on the ice in five-on-five situations, the Devils have outscored their playoff opposition 9-to-3, outshot them 25-to-22, and held the balance of play. While DeBoer employs a by-committee approach with his defenders, Zidlicky often sees the opposition’s best, and he’s been successful despite it.

Zidlicky’s struggles in Minnesota and his difficulty fitting into Yeo’s system were always overstated. At even strength, the Wild and their opponents managed 331 shots each with Zidlicky on the ice. With Zidlicky off the ice, the Wild were outshot 1,209 to 947. Every time the team scratched Zidlicky, they were scratching one of just two players on the team who were not getting outshot by the opposition.

For some teams, Zidlicky’s problems with Yeo might have been a red flag. But Devils general manager Lou Lamoriello has previously said he doesn’t believe in hearsay, and in this case he had some inside help.

“[W]e had a built-in evaluator,” Lamoriello explained. “[Special assignment coach] Jacques Lemaire coached him in Minnesota and [assistant] Dave Barr coached him [last season] in Minnesota. What better references do you have than two people who have been hand-to-hand [working with him]? We knew of his competitiveness. We knew what he could do as far as creating offensive situations. Anything that happened in Minnesota this year was not even a question [in] our mind of his character and the type of human being he was.”

The Devils looked past Zidlicky’s struggles this season and saw that he had been an excellent defender for years. They assessed the player and the person, and look to have been correct on both counts, and — partly because of that — they’ll be facing off against the Rangers in Game 1 of the Eastern Conference finals tonight, while the Wild watch from home.