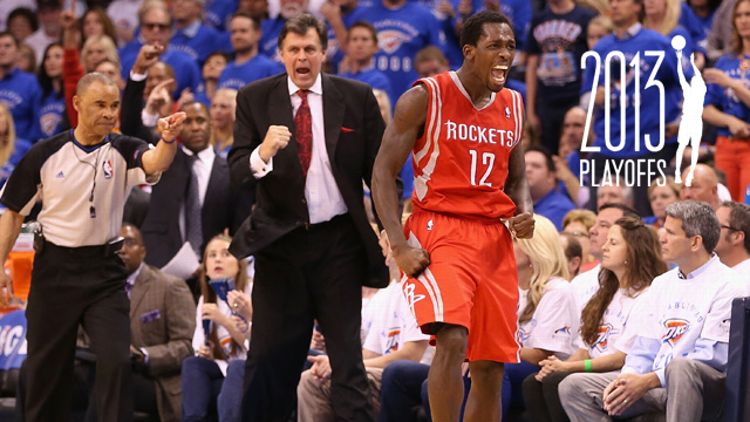 The NBA playoffs are in full swing, and as the amazing continues to happen, the Grantland crew wants to help you buff up on some of the lesser-known faces who are populating basketball’s second season.

Who Is He? Patrick Beverley.

Where Is He From? Arkansas.

His Game in 25 Words or Fewer: Athletic point guard who can get to (and finish) at the rim, as well as shoot from 3. A willing and effective on-ball defender.

Best Wikipedia Tidbit: As a member of the Ukrainian Second Division’s Dnipro club, Beverley “played in the Ukrainian All Star Game and won the Slam Dunk Contest.”

Beverley played two seasons at Arkansas, but why talk about that when we can talk about basketball in St. Petersburg? Beverley averaged 16.9 points per game in the EuroCup on his way to MVP honors last year, and how he got there seems to mimic his offensive game with the Rockets. Beverley has a good first step, and when he does get to the rim, he has enough creativity and lift to be effective despite being only 6-foot-1. His 3-point shooting, in terms of percentage, hasn’t changed much since his days at Arkansas, but at 37 or so percent, it’s plenty good to warrant shooting them.

I think where you stand on what went down in Game 2 says a lot about you as a person. And that doesn’t mean there’s a right or wrong way to think about it. Life is full of moral ambiguities, man.

Best Tweet: He tweets sparingly, and most of the updates are designed to let us know whatever city the Rockets have just landed in. Occasionally, though, Beverley offers up his movie thoughts. He was a big fan of The Call, but like some others, he’s probably experiencing some Joseph Gordon-Levitt fatigue. Or he’s not a big fan of farms.

Not impressed with the movie Looper!!!!

Meanest Tweet @: After what happened in Game 2, it’s really too tough to choose. I’d say the latest news probably takes it, though.

Is He Saber-Friendly? C’mon — he’s a Rocket. Beverley fits in just fine with Houston’s math-ctentric thinking. His True Shooting percentage is 55 — above league-average — and his tendency to stick with 3-point attempts and shots at the rim mesh with the Rockets’ MO. Of his 189 shots this season, 157 of them came from behind the arc or in the restricted area.

Should We Know Him? Yes, and for more than what happened between him and Westbrook. After coming to the Rockets from Houston’s D-League affiliate in January, Beverley played more than 25 minutes just once during the regular season. But between Lin’s injury and Kevin McHale’s decision to go with a small starting lineup against OKC, Beverley hasn’t dipped below 22 minutes against the Thunder. He’s scored in double figures in three of those games while keeping his efficiency numbers pretty consistent. Beverley’s 2013 postseason will likely be remembered for how he ended Westbrook’s, but it’s also been a chance for Houston to realize they have another, notably cheap asset going forward.