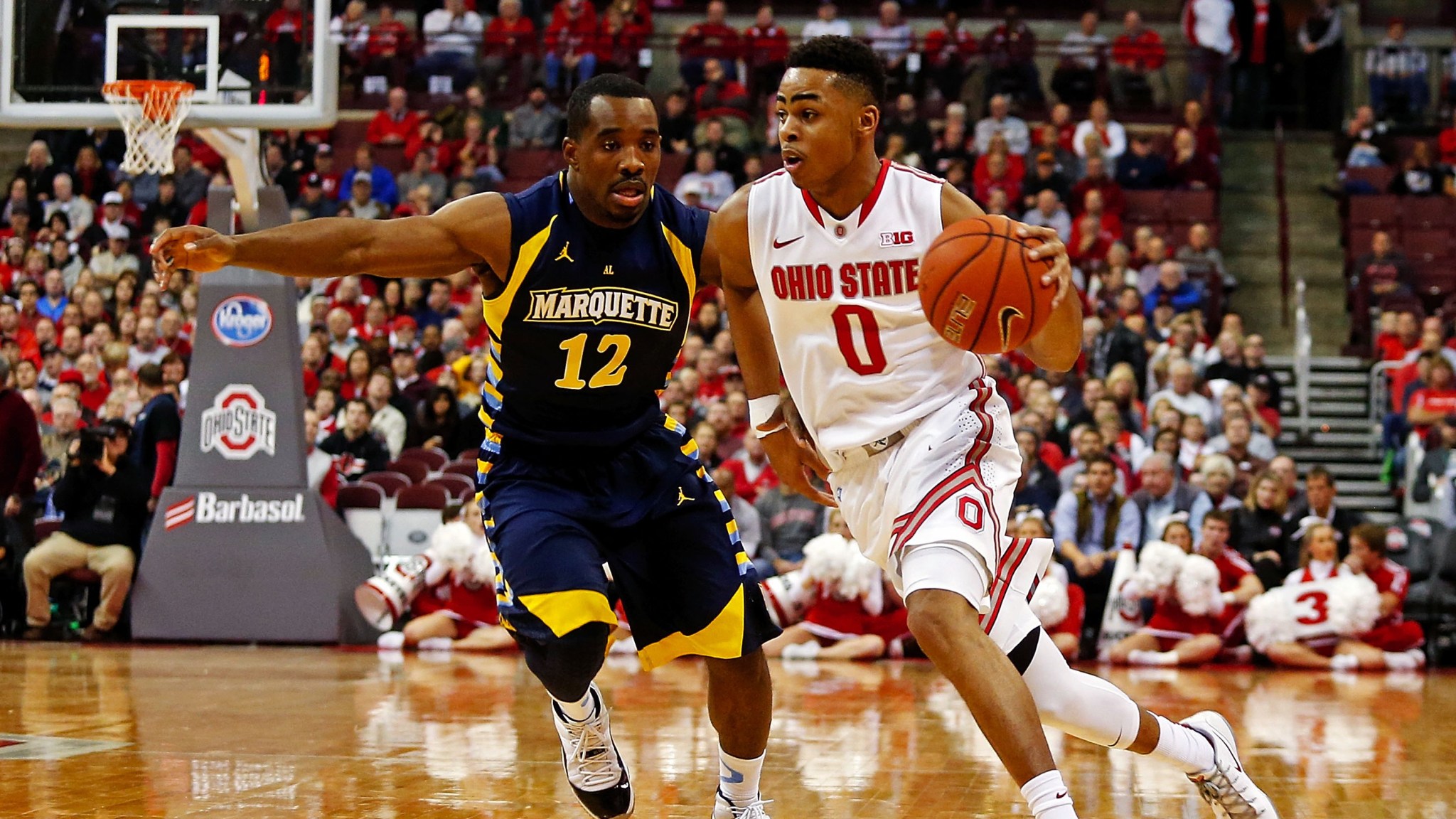 A freshman has been tearing through college basketball defenses for several months now, and it’s time to pay attention. He doesn’t play at Kentucky, he doesn’t play at Duke, and he wasn’t a top-10 recruit, but by the end of the year, he may be more impressive than anyone. I’m writing this not because I’ve been following him all year long, but because it’s February and this is the college basketball player I’m most excited about watching for the next six weeks.

Who is he? D’Angelo Russell, 6-foot-5 freshman guard at Ohio State.

Will he be a top-five draft pick? Probably. We’ll come back to that.

Where is he from? Louisville, Kentucky.

Where was he ranked before this year? Scout and ESPN had him as the no. 13 freshman in the country, and Rivals had him at no. 18.

Why does he wear no. 0? No idea, but until further notice, I’m choosing to believe it’s in homage to Gilbert Arenas.

Where did he play high school ball? Monteverde Academy, a powerhouse in Florida and last year’s national champion. This is part of how he slid under the radar the past few years. As Ricky O’Donnell wrote for SB Nation this week, playing for Monteverde meant sharing the ball and spotlight with Ben Simmons, the no. 1 recruit for 2015 and likely no. 1 pick two years from now. On his AAU team, he was a late addition to a backcourt that already included Duke’s Grayson Allen and UNC’s Joel Berry — another situation that kept him from shining.

His game in 25 words or fewer: Smooth. Crafty. Deadly.

You might know him from: This pass went viral a few weeks ago, and that was the first time the entire Internet acknowledged Russell for real. This is as notable for the pass as it is the (cruel, criminal) missed layup at the end.

He also re-created that stunt at Northwestern a week later, and this time it came with a dunk instead of a blown layup. Speaking of Northwestern …

Video vault: Yeah. Thirty-three points and six assists. Even if it was against Northwestern, it becomes very difficult to talk yourself out of D’Angelo Russell after watching highlights like these:

Social media presence: He almost never goes on Twitter, which should definitely count as a point in his favor in the NBA draft and really just in life. This wins me over forever, though:

Also, while we’re talking social media, Russell has inspired an existential crisis in at least one Grantland employee over the past few months.

D'Angelo Russell scored almost 3x as many points in first half tonight that I scored in my entire career. Not sure how to feel about this.

How do NBA scouts view him?

Even before the season, people were buzzing:

Scouts gushing over OSU's freshman D'Angelo Russell. Had 33 points in scrimmage at WVU. "Vision and delivery of passes impressive" one says.

Four months later, some people trust Draft Express (no. 2 prospect), others stick with ESPN’s Chad Ford (no. 3), but the only true, definitive resource on the web is the one who tabbed DeShawn Stevenson as the next Michael Jordan. Notes from Aran Smith and NBADraft.net:

Strengths: Precocious combo guard with tremendous ball skills … Intriguing long term prospect considering his package of attributes … Smart, and smooth guard who never seems to get rattled or rushed into making mistakes … Shows great poise and maturity for a freshman. Makes everything look easy … Great imagination and creativity. His vision and passing ability is very intriguing … Excellent decision maker and appears to have the ability to develop into a point guard for the next level … His drive and dish already is an effective element to his game … 6-foot-9 wingspan gives him the ability to disrupt passing lanes and shots, as well as giving him extra length to get to loose balls and get shots off …

What’s the worst-case scenario? Shhh. Don’t even mention it.

Evan Turner on getting boo'd in Philly: "Jesus was hated too." http://t.co/ulmaAVpM2b pic.twitter.com/VAX3FDgJED

What’s the best-case scenario? Something like James Harden, but without all the qualities that make it hard to love James Harden.

When’s his next game? He plays Penn State at home on the Big Ten Network tonight, and on Saturday he and the Buckeyes will travel to East Lansing to play Michigan State.

Should you know him? It’s easy to get excited about big guys in college. Think of someone like Nerlens Noel. We can dream about unlimited potential, project offensive or defensive skills they don’t have, and mentally insert them into every lottery team’s starting lineup and imagine what a difference they’ll make. It’s usually harder with guards.

Remember how nobody lost their mind over Russell Westbrook during his two years at UCLA? Or how most of America ignored James Harden at Arizona State? Or how nobody was sure if Steph Curry could succeed against NBA defenses? With the last two especially, they didn’t have world-beating athleticism or crazy size that screamed “superstar.” All they could do was score and drive defenses crazy — or in Westbrook’s case, take on the whole goddamn world and find a way to win.

Even Chris Paul slipped to no. 4 in the draft because it wasn’t so obvious in college that he would reign over the NBA. The league prefers the “unlimited ceiling” of guys like Andrew Bogut or Marvin Williams. The common denominator with guards like Westbrook and Harden is that they had a knack for bending games to their will that you couldn’t really measure. What makes a smaller player dominate is different from what makes a giant unstoppable. Whatever that quality is, Russell looks like he has it.

Even as he shoots up draft boards, you’ll hear more about Jahlil Okafor for the next few months. Pretty soon, everyone will notice that Karl-Anthony Towns is even more impressive than Okafor, and you’ll hear about him too. But through it all, keep an eye on the combo guard averaging 20, 6, and 5 and carrying his team all year.

Is there one quote that describes his season thus far? “I didn’t honestly know who the opponent was, just prepared the best way I could,” Russell said in November after the Buckeyes blew out Sacred Heart. “And I just told myself whoever was guarding me, I was going to destroy them.”

Watch this man as soon as possible.