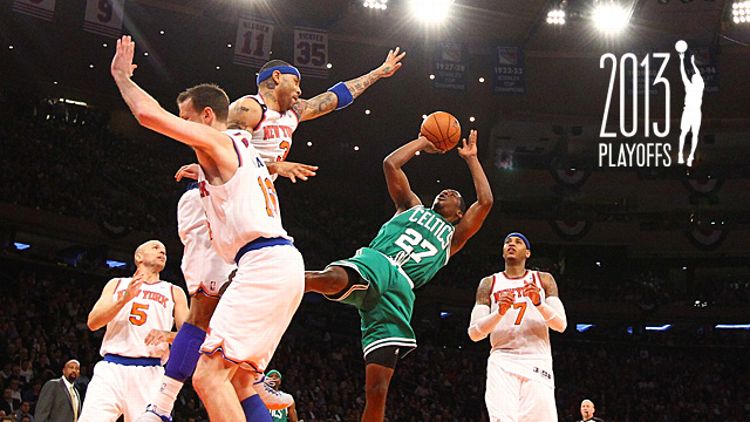 Who Is He? Jordan Crawford.

Where Is He From? Xavier/outer space.

His Game in 25 Words or Fewer: Notorious chucker who maintains one of the planet’s worst shot selections and misses a staggering amount of attempts; not pumped about the whole defense thing.

Best Wikipedia Tidbit: The best tidbit about Crawford’s Wikipedia page is what it doesn’t include. As things currently stand, Jordan Crawford is best known for two things: (1) A grainy video of him dunking on LeBron that LeBron attempted to make disappear, and (2) a less-grainy video of him saying some not-so-cool stuff to Carmelo Anthony on Wednesday night.

What Was He Like in College? More or less the same guy he is now — except in college, that stuff tends to be a lot more fun. Crawford played only one year at Xavier after transferring from Indiana (following the Kelvin Sampson debacle) and averaged 20 points per game on 16 shots a game.

The above clip is pretty much everything anyone needs to know about Crawford’s lone season as a Musketeer. It’s the first overtime of a first-round NCAA tournament game against second-seeded Kansas State, Xavier is down three, Crawford heaves a 35-footer toward the rim with five seconds left, the dude filming yells “Oh my gosh,” and the ball goes in.

There’s really no other option. It’s been a few years since this all happened, so here’s a refresher. In the summer of 2009, Crawford was a Xavier transfer attending James’s camp in Akron. During a pickup game that supposedly started after the camp had finished, Crawford drove the lane and threw one down over LeBron. A Nike representative at the camp confiscated the tape under the guise that after-hours games at the camp were off-limits for cameras. But since this is the 21st century and there is NOWHERE TO HIDE IN THE INTERNET the tape eventually came out. I’m really not trying to be cruel when I say it’s unquestionably the greatest moment of Crawford’s basketball life. He said as much.

See, I bet you thought I’d go with Wednesday’s postgame craziness. That’s too easy, though. Alone, this video seems pretty innocuous, if not impressive. Crawford scores 26 points on a combo of deep 3s, tough finishes at the rim, and a bit of midrange touch. Now check out the description.

In this horrid, unwatchable 77-70 win for the Wiz, we are treated to Crawford taking 24 shots and making nine of them. It’s like the second coming of Allen Iverson but without any of the crossovers, marketability or practice rants. But in this distilled highlight package that I lovingly prepared for you folks, it appears that Crawford had a “good” game. That’s the power of YouTube, and I promise to wield that power wisely.

Thanks to YouTube user DownToBuck for perfectly communicating the Jordan Crawford. And for having a YouTube avatar of Ersan Ilyasova with Photoshopped sunglasses. Keep fighting the fight.

Try again. You on the bench for a reason. instagram.com/p/Y0QM3-xjT5/

OK, so it’s not really mean, and it’s not @ him, but this is a subtweet for all time.

Is He Saber-Friendly? You guys have seen that KD-DWade commercial, right? The one where Durant wakes up in a cold sweat at the thought of Wade denying him at the rim? I can only assume that’s the effect Crawford’s off-the-bounce 20-footers used to have on John Hollinger.

For his career, Crawford’s True Shooting percentage is just shy of 49. That isn’t ideal for a low-volume shooter, let alone a guy who launches as many shots as Crawford does. He’s averaged 16.8 shot attempts per 36 in his three NBA seasons — one less than Kevin Durant. Crawford’s shooting chart is actually pretty bizarre. From several spots on the floor, he’s way above average as a midrange shooter. Crawford has made just 29 percent of his 3s while taking more than five per game over the course of his career.

One defense of Crawford’s horrible decision-making is that in a dire situation with the Wizards, it was someone’s responsibility to score. That might hold up a little better if Crawford weren’t so clearly a part of the problem, rather than the solution, in Washington. His presence on defense is pretty much nonexistent, and the Wizards actually gave up nine fewer points per 100 possessions with him off the floor.

Should We Know Him? Probably not, unless you’re super into beefs between superstars and bench players, or guys who wear weed socks, or both. Crawford is a good example of a type of player that comes along pretty often in the NBA. As a guy with no conscience on a terrible team, he managed to put up the sort of numbers and scattered clips that might be enough to convince people he’s a “scorer.” If a scorer is any guy willing to toss up enough shit shots to get his 15, this is an apt description. If it’s someone who’s remotely efficient at putting basketballs in baskets, it is not. No team (aside from maybe Chicago) is desperate for a scoring punch like the Celtics are, and knowing that was part of the motivation for bringing Crawford to town following Rajon Rondo’s injury. And still, it’s Terrence Williams (also known for some eclectic sock choices) who’s getting minutes in the Celtics’ backcourt