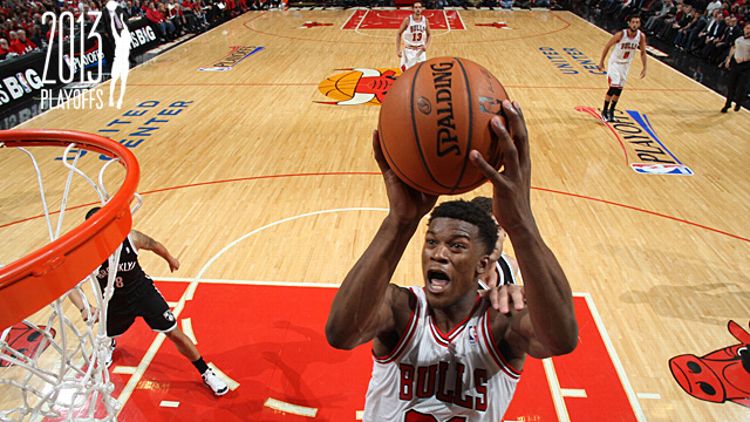 Who Is He? Jimmy Butler.

What’s His Nickname? I’m not sure whether it’s official or anything, but “Jimmy Buckets” seems to have stuck.

Where’s He From? Marquette.

His Game in 25 Words or Fewer: Excellent defender with length needed to shut down both wing positions. Already an efficient scorer, his shooting numbers point to even more improvement from 3.

Best Wikipedia Tidbit: “Best” probably isn’t the right word, but it’s certainly the most incredible: “Butler’s father abandoned the family when he was an infant. By the time he was 13 years old and living in the Houston suburb of Tomball, his mother kicked him out of the house. As Butler remembered it in a 2011 interview, she told him, ‘I don’t like the look of you. You gotta go.’ He then bounced between the homes of various friends, staying for a few weeks at a time before moving on to another house.”

This was a story mentioned a lot in the period leading up to the 2011 draft, in which Butler eventually went 30th to the Bulls. After his mother told him to leave, Butler stayed with various friends for a few weeks at a time, but before his senior year, he became friends with a local kid named Jordan Leslie. Video-game sessions turned to sleepovers, and eventually, scattered nights turned to weeklong stays. Eventually, Leslie’s mother, Michelle Lambert, welcomed Butler into the family. When ESPN’s Chad Ford wrote about the story before the draft, Butler had one request about how it would be portrayed: “I’m just asking you, don’t write it in a way that makes people feel sorry for me,” he said. “I hate that. There’s nothing to feel sorry about. I love what happened to me. It made me who I am. I’m grateful for the challenges I’ve faced. Please, don’t make them feel sorry for me.”

The Jimmy Butler craze had long hit Chicago by the time the Bulls played the Lakers in January, but this was Butler’s pronouncement to the rest of the basketball-watching public. Butler scored only 10 points on 4-of-10 shooting in the Bulls’ win, but in his second straight start for the injured Luol Deng, he spent most of his 43 minutes ruining Kobe Bryant’s evening. Bryant went 7-for-22 on the night, and as evidenced above, it wasn’t all on him. At 6-foot-8, Butler is the exact sort of defender that gives Bryant trouble. He’s quick enough to play shooting guards, but he’s long enough to guard small forwards. If the Jimmy for Starting Shooting Guard campaign wasn’t in full effect before this game, it certainly was after it was over.

Second-Best YouTube Clip Because Jimmy Butler Has No Damning YouTube Clips, and You Shouldn’t Bother Looking Because It’s a Waste of Time:

This came in the third quarter of the Bulls’ streak-ending win over the Heat. That is all.

Best Tweet: Butler’s tweets are mostly him wishing everyone a good morning and telling them to have a good day (seriously, this guy is the best) or rooting on the Marquette basketball team. Occasionally we get an update on his movie-watching habits, and this one from December 28 is definitely my favorite:

Others include CB4 and Sister Act 2, but the best part about the Richie Rich choice is that it looks like it wasn’t a late-night TBS sort of scenario. About 10 minutes earlier, Butler tweeted this:

Can somebody let me know a good movie to order on iTunes ?

I’m pretty sure this means that not only did Jimmy Butler watch a Macaulay Culkin vehicle from 1994, he went out of his way — and likely paid — to do so. This would be a good time to mention that I’ve seen Richie Rich at least 20 times.

Is He Saber-Friendly? Yes. On offense, the side of the ball on which Butler needs the most work, he’s already developed into an efficient scorer. Butler’s True Shooting percentage for the season was 57.4, well above the league average. That’s bolstered by a solid 38 percent showing from 3 and an 80.3 free throw percentage. How Butler gets to that 38 percent is a little different than most. Butler shot a stellar 43.6 percent on 3s above the break while shooting just 36.5 percent from the corners. His 105 attempts from 3 are more than he took in his entire college career and first season combined, so while he’ll need to show this year is for real, signs point to Butler being a very nice scorer down the line.

Defensively, the numbers back up most of what’s obvious on the screen. The Bulls’ points allowed per 100 possessions is almost identical with Butler on and off the court, but as part of the Bulls’ second unit, Butler usually gets his minutes alongside the porous defense of Nate Robinson.

Of every Bulls 3-man lineup to play at least 50 minutes this season, Butler is part of six of the top 10 in points allowed per 100 possessions (four involved both Butler and the notably excellent Taj Gibson; their two-man unit figure [98.7] doesn’t speak to how good the two are together, mostly because almost 70 percent of those minutes also came with Robinson on the floor). In the 384 minutes when Butler, Taj Gibson, and Joakim Noah were on the floor together, the Bulls gave up just 90.4 points per 100 possessions. Butler’s also an excellent offensive rebounder for a wing player, a trait he shares with many of his fellow Bulls.

Should We Know Him? If you didn’t already, then yes. Butler has started the past 21 games for the Bulls, and he’ll be a big part of Chicago’s plans against the Heat. Butler is the one notable difference (aside from that other notable difference) about this Bulls starting lineup compared to the last time Chicago met Miami in the playoffs, and his ability to defend on the wing will play a part in just how annoying this series gets for Miami. Chicago’s big question will continue to be how it’s going to get enough points, but the lineup of Hinrich, Butler, Deng, Gibson, and Noah is one the Heat would just as soon have avoided. The Bulls are going to turn this series into a brawl as quickly as possible, and Butler is someone who makes them equipped to do so.