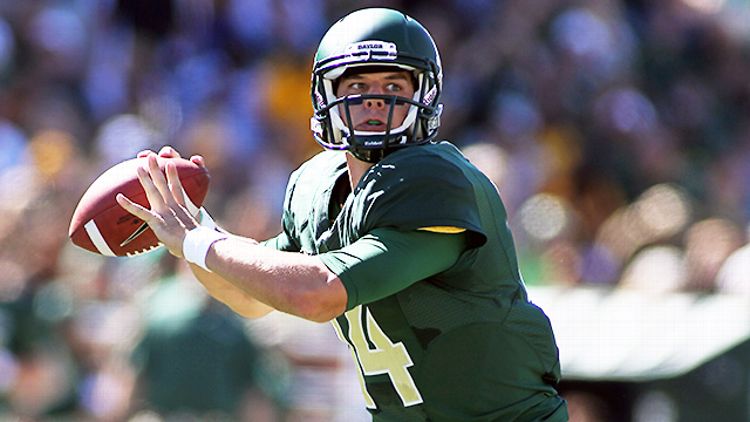 Who Is He? Baylor quarterback Bryce Petty.

Where Is He From? Midlothian, Texas.

Is That in Middle Earth? Negative. If you’re orienteering, head about 30 minutes south of Cowboys Stadium in Arlington to get to Midlothian.

Is Bryce Petty a Hobbit? No. He’s too big, and too good at football.

Years Played: Petty saw 11 games of backup action over the past two seasons and has started all three of Baylor’s 2013 contests.

Follow the Bouncing Ball: Originally a Tennessee commit along with some kid named “Tajh Boyd,” Petty wasn’t wanted by incoming Vols coach Lane Kiffin and ended up in grayshirt limbo for 2009. Petty redshirted his true freshman season at Baylor in 2010, saw occasional snaps as a backup behind Robert Griffin III and Nick Florence in 2011 and 2012, respectively, and earned the starting job prior to the 2013 season.

His Game in 25 Words or Fewer: Smokin’ through three games in 2013, with 37 rushing yards and 1,001 passing yards. Only you can prevent forest fires.

Bio Tidbit: Petty had already graduated from Baylor before he took his first snap as the starting quarterback. He earned his degree in May 2013 and is now taking graduate classes.

Best Highlight: Petty didn’t see the field much during the 2012 scare Louisiana-Monroe put into the Bears. He did get to execute a good bit of the payback in 2013, though:

Social Media Presence: On Twitter at @b_petty14, Petty isn’t as prolific as many of his peers, but he provides glimpses into college life that’ll take you back in a hurry:

Value purchase of the day: 5 snack packs for 5$ #mammawouldbeproud pic.twitter.com/dOZgj431IV

Should We Know Him? Absolutely, starting right now, and not just because he’s on pace for a 4,000-yard regular season in passing. With Wofford, Buffalo, and Louisiana-Monroe dispatched, the Bears now move to their Big 12 schedule, starting with West Virginia in Waco this week. Baylor hasn’t needed to work for a win yet, and who knows whether that’ll change tomorrow given the way the Mountaineers have been going about their business.

But take a look at the November stretch that includes three must-watch contests in a row: a visit from Oklahoma, Texas Tech at Cowboy Stadium, and a trip to Oklahoma State. Running back Lache Seastrunk may be the better-known Baylor player and a logical Heisman candidate, but if the Bears enter that gauntlet still undefeated — between Petty’s offense and the defensive performances the Bears have put on in September, it’s more than possible — and Petty performs well, the QB will be perfectly poised for a late-season run at some postseason hardware.