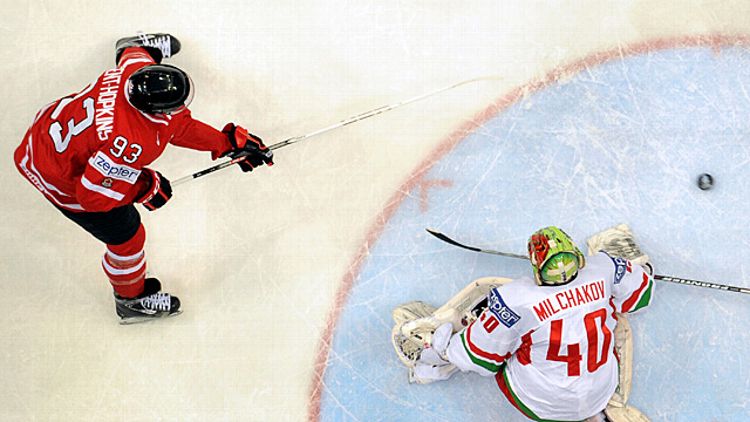 “6:50 a.m. in Helsinki, Finland and I’m about to take my Gov30 final #sickjoke,” tweets a 19-year-old Harvard kid as I’m eating my dinner out here in Pacific time, and I feel legitimately bad for the guy. Despite all appearances, the post didn’t originate from some trustafarian cruising through a “semester abroad” and e-taking an easy-A final from an Internet cafe. It was written by Jimmy Vesey, a freshman who leads the Harvard hockey team in scoring and is in the midst of trying to (d)eke his way onto the U.S. national junior squad.

On Saturday, he’ll find out whether he’ll be playing in next week’s World Junior Hockey Championships, the international Under-20 men’s hockey tournament more commonly known as the WJC. If Vesey is one of USA Hockey’s three final cuts, he’ll fly back to the States from Helsinki just in time for Christmas as the trimmed team heads eastward to Ufa, Russia, for the tournament. It will be an honor just to have been considered. He’s scored 8 points in nine games with Harvard this fall, earning ECAC Rookie of the Month honors — which is great, but compare that with the line on Alex Galchenyuk, a shoo-in first-liner for Team USA: 33 games played this fall in the Ontario Hockey League since being drafted no. 3 overall by the Montreal Canadiens; 27 goals, 34 assists.

Vesey is what They (scouts, coaches, guys whose titles involve the words “development” or “personnel,” people who post on message boards and are the chipper types and not the miserly know-it-alls) call a realgoodyoungplayer. He was taken in the third round of the NHL draft this summer by the Nashville Predators. But right now, he’s just a kid on the bubble. The Americans are set to play Sweden in an exhibition game later today, and They will be watching him with an extra close eye. Unless, of course, They’ve already made up their minds.

But before Vesey can even start thinking about that, it’s a pre-7 a.m. wake-up on this Thursday, this game day; and a chaperoned room somewhere in the capital of Finland; and a Gov30 final. The sun won’t be rising for another two and a half hours.

Team Canada is in Finland for exhibition games right now, too, but they’ve already made all their cuts, as is the tradition, during a full minicamp in Calgary last week. “We’re actually jealous of Canada’s system,” USA Hockey director of player personnel Tim Taylor told NHL.com at the United States’ abbreviated training sessions earlier this week, held at the New York Rangers’ dormant practice facility. “They can get their kids together in early December and have a five-day camp with two full teams and narrow it down from there.”

There’s no question that everything involving the World Junior Championships is bigger in Canada than anywhere else. Yesterday, the top story on the TSN website for a while was this:

Edmonton Oilers forward Jordan Eberle is the No. 1 player in Team Canada history at the World Juniors, as determined by a poll of 25 hockey experts for TSN’s Team Canada’s 40 Greatest Juniors special (Tonight at 7:30pm et/4:30pm et on TSN and TSN Mobile TV). Full Story.

The list is admittedly a joy to scroll through, taking you back to a time when Dion Phaneuf smiled, and Jeff Carter looked like that, and a pimpled Wayne Gretzky led the tournament in scoring at the age of 16. But it’s also a good reminder of why Canadians are so into the WJC: because they consistently ice top squads, sure, but also because, since 1991, TSN has made a point to obsessively analyze and rank and report everyone involved’s every move.

The network’s involvement in the WJC grew it from just another one of international ice hockey’s many tournaments to, in some ways, a rite of passage for Canada’s top young players. Speculation about roster selections begins months in advance. Grown men have heated conversations revolving around phrases like “he’s a 1994 birth year.” The upside of this is that broadcasts of even the preliminary rounds of the WJC draw multiple millions of viewers. The downside of this is the “perp walk” — industry parlance for the phalanx of cameras and hockey reporters that greet each kid upon his getting ixnayed from the roster.

“Imagine you’re 18 years old and you’ve dreamed all your career to make this team, then you’re woken up by a 6 a.m. call from the coach informing you that you’ve just been cut,” wrote The Hockey News’ Ken Campbell last year. (Columns like these are an annual Canadian tradition.) “Then to add to the humiliation, you have to walk out into a hotel lobby full of microphones and people asking what went wrong and wondering whether you thought you did everything you could to make the team.”

These are teenagers — all of them — something that’s easy to forget. And while that can make the WJC feel occasionally off-putting — so much wild, nationalistic passion pinned on the backs of these boys! — it’s also what provides so much of the allure. We love having already seen the band in some backwater dive bar before they up and got all expensively famous. And so it goes with top NHL prospects.

There are very few things that the lockout hasn’t ruined for hockey fans, but the World Junior Hockey Championships is blessedly one of them. With no NHL expected until January at the earliest, elite young players who would have otherwise been tied up with their teams are instead free to participate in the showcase event. Two years ago, a 17-year-old Ryan Nugent-Hopkins was one of the kids doing the perp walk after being one of the last pre-WJC cuts; he wasn’t on the team last season either, this time because he was too busy scoring 52 points for the Edmonton Oilers in a remarkable rookie season. This year, though, he’s been named Canada’s team captain.

The Nuge is just one of a number of players who most likely wouldn’t have been in the tournament if not for the lockout. Of his teammates, highly touted forward Jonathan Huberdeau and defenseman Dougie Hamilton likely would have made the rosters of the Florida Panthers and Boston Bruins, respectively. The Montreal Canadiens had flatly announced that if the season began, they would not allow the USA’s Galchenyuk to go to Ufa; more than a few American fans grumbled about it being part of a conspiracy. Nail Yakupov, the Oilers’ first overall pick this summer, might have missed suiting up for Russia. Instead, they’ll all be in Ufa, on the ice.

While a few notable names are still being held back by their North American teams — the Ottawa Senators are preventing Mika Zibenajad from leaving his assignment in the AHL, an unhappy blow for the defending gold medalists, while it’s rumored (though not confirmed) that the Buffalo Sabres won’t be sending top Latvian player Zemgus Girgensons to Ufa. But plenty of recent and future NHL draft picks will lead their teams. Washington Capitals pick Filip Forsberg was just named captain of Team Sweden, Blackhawks fans will want to tune in to Finland’s games to keep an eye on Teuvo Teravainen, and Anaheim Ducks supporters can watch Sweden’s Hampus Lindholm and top USA goalie John Gibson, among several others. Canada’s Nathan MacKinnon and American Seth Jones, who are widely expected to go first and second in the 2013 draft, will both suit up for their countries.

No team is more stacked on paper than Canada; ESPN Insider’s Corey Pronman ranked them as the best team of the tournament, noting that “there’s a significant drop off after Canada.”

Last time there was a lockout, the Canadian “Dream Team II” roster included Patrice Bergeron, Corey Perry, Mike Richards, Ryan Getzlaf, Sidney Crosby, Jeff Carter, Shea Weber, Dion Phaneuf, Brent Seabrook, and other good players that I am omitting for space. The Russians had Alex Ovechkin and Evgeni Malkin. Team USA featured Ryan Suter, Ryan Callahan, and Phil Kessel. It’s impossible not to feel a little bit excited this time around, scanning all of today’s young rosters and wondering how their names might look in hindsight a few years down the line.

For an activity that’s so frequently derided for being so prohibitively local, ice hockey sure does have impressive international reach. This isn’t to say that the top hockey nations of the world constitute any sort of pan-global melting pot; most are utterly white (and also get lots of snow). But the degree to which national teams and international competitions have figured into and frequently dominated ice-hockey history is unusual when compared with most other North American professional sports. You could probably write a complete treatment of the entirety of the Cold War based on IIHF box scores alone.

It’s one of the great things about hockey — arguing over which countries have better uniforms or superior systems the same way you’d do about two NHL teams; getting the occasional pass to be a borderline xenophobic monster — but it’s also the rub. The tournament being hosted in Russia means that, here in North America, games will begin at uncomfortable overnight hours like 4:30 (or the more dignified time slot of 9 a.m.) Still, if you’re in the U.S., you can watch all of the American games live and tape-delayed on the NHL Network; if you’re in Canada, I don’t need to tell you where to go, because you’ve been living it for months.

I say set your alarms and get up and watch a few games next week; you’ll be watching most of the world’s most exciting talent in its relative infancy. (And besides, you’ll need the practice for the Olympics in Sochi.) It may not be the NHL, but it’s some damn good hockey you can watch over coffee, and what’s bad about that? It could always be worse, you know: At least there’s no Gov30 final exam involved. Speaking of which, the USA ended up beating Sweden in their first pre-tournament exhibition today. And Jimmy Vesey was named player of the game.