What Will Eddie Jordan’s Princeton Offense Look Like With the Lakers? 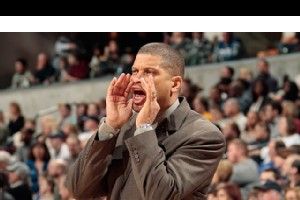 When reports of the Lakers and Mike Brown adding Eddie Jordan to their coaching staff surfaced, two questions came to mind: (1) Will Jordan bring the Princeton offense with him, and (2) how effective will it be with the Los Angeles Lakers? The first part of that question was answered rather quickly by Brown, who told Marc J. Spears of Yahoo Sports that the Lakers plan on mixing in the Princeton offense: “We’re still going to do a lot of stuff we did last year. We’re just incorporating some of the Princeton stuff.”

It wasn’t just Mike Brown who wanted Eddie Jordan. According to Adrian Wojnarwoski the Princeton offense is something that Kobe Bryant wants to see the Lakers run as well. So with the Lakers’ head coach and star player both endorsing the new system’s arrival, we can assume it’s going to be a major part of the Lakers’ offensive playbook next season.

It’s great to see Princeton offense explained by the NBA coach who has kept it relevant this decade, but in the end it’s just five guys in suits and work clothes explaining it in a TV studio with no defense. A better way to experience the Jordan variation on the system is to sit back and watch one of his former teams running it. Here is a look at a few different possessions of the ’05-06, Jordan-coached Washington Wizards.

After watching the two above clips and then watching tape on it, two things come to mind: (1) spots and (2) off-ball movement. By spots, I mean positions on the floor that each player is responsible to get to before the offensive set starts. This is the key to spacing. If you start too close together, the offense isn’t going to be nearly as effective. After everyone gets to his spot, the next key is the movement off the ball, which is helped by the fantastic spacing due to the positioning/spots. The result? Quick passes from side to side combined with sharp cuts, causing confusion for the defense, creating open looks or mismatches for the offense.

For the Lakers and their fans, the question is how this style of offense fits in with their high-profile roster. I think there’s reason to get excited here. The Princeton offense does things to complement each player’s skill set, putting them in positions to succeed. Here’s a breakdown.

How It Helps Pau Gasol and Dwight Howard

What’s the first option Eddie Jordan talked about when explaining his offense to NBATV? A look into the center. In this offense, most post touches come early, with a big posting up being the first look. The most important thing to look at is the spacing once the ball gets delivered into the post.

Look at the time and the space that Washington’s post players have when they make the catch down low. Sure, you could say that teams shouldn’t be double-teaming these bigs, but this has a lot more to do with spacing and off-ball movement. That can be duplicated in Los Angeles — even more so when you consider the fact that you have guys like Steve Nash and Kobe Bryant working off of the ball, setting screens, and cutting. You can’t leave those guys open, and that takes the defense’s attention away from the post, screwing up the timing of doubles, even to the point that they might stop coming. For Pau Gasol and Dwight Howard, that’s a dream come true.

How It Helps Steve Nash

On the surface, it doesn’t seem that the Princeton offense will help Steve Nash. He’s a guy who needs the basketball in his hands, and the Princeton offense relies on the circulation of the ball. It also sends cutters (including the point guard) every which way. However, when you take a deeper look, you can find spots where the system could help Nash, and maybe the biggest reason why it does is because it provides the veteran with an incredible amount of space in pick-and-roll situations.

Gilbert Arenas and Steve Nash don’t play the pick-and-roll the same way. Not even close. But that isn’t what we are focused on here. What we are talking about is the spacing when the ball screen is used. If it’s a high ball screen, you have two guys in the corner and one spaced out on the opposite wing. If it’s on the side (which usually happens when the big tries to post up, doesn’t get the basketball, then comes up and sets a ball screen), you have the three other players spaced out on the opposite side of the court. In both instances you have these ball screens being set as there is other action taking place off of the ball. So not only do you have this fantastic spacing making it difficult to help on the pick-and-roll, but you have all of this action off of the ball occupying the defense’s attention. Imagine what Steve Nash can do with this space as Dwight Howard or Pau Gasol sets screens for him.

How It Helps Kobe

Finally, we get to Kobe Bryant. There is a reason why he pushed so hard for Eddie Jordan to join the Lakers, and that’s because the Princeton offense makes life much easier for him. For all of the movement, cutting, and passing, Jordan’s system in Washington created a lot of isolation opportunities for Gilbert Arenas. Kobe Bryant can fill that role.

Bryant will be able to take advantage of iso’s based off of the Princeton offense’s positioning and movement. In the first clip, you see everyone in their spot as Arenas brings up the basketball (I think when the Lakers run the Princeton offense, Bryant and Nash will split ballhandling duties). Everyone sets up in their spots and the initial look is in the post. Arenas’s man backs off of him and he is able to take advantage by diving to the rim.

Something else Eddie Jordan’s offense will do for Kobe Bryant? It will give him opportunities to post his man up. In Washington, both Caron Butler and Arenas got post touches. When Bryant has a mismatch, Jordan can replicate the sets he used in D.C. to get the ball to Bryant in the post.

The most important thing to take into consideration when looking at these clips is the space that Butler and Arenas have due to the positioning of the rest of the offense. If Kobe is feeling it and getting post touches, the defense is going to want to send double teams. Where are those double teams going to come from? When executed correctly, the spacing is so good on these post touches that whoever is responsible for the double team won’t get there in time, allowing Bryant to work one-on-one on the block, creating clean looks.

In my opinion, the Lakers are going to start running bits and pieces of this offense here and there in the early days of next season, working it in slowly. However, once the Lakers see how successful this offense is, and I do believe that it will be extremely successful, they will incorporate it more and more and you will see them running it at a high rate. I just think that an offense like this complements everyone on this team’s skill set, allowing each player to have success with a particular aspect of it.