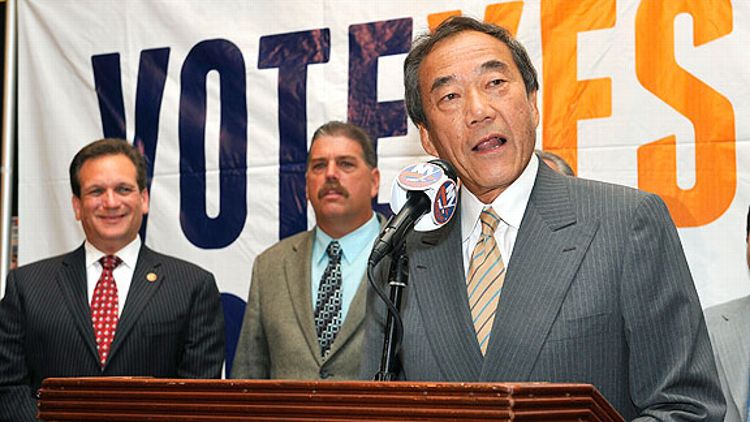 Long Island residents on Monday voted on a special referendum to authorize the issue of a municipal bonds that would finance the construction of a new arena. Still reading? Good! This vote was important, because facility would have replaced the Nassau Veterans Memorial Coliseum, which was built in 1972 (and shows it.) The vote was expected to either breathe new life into the building’s main tenant, the New York Islanders, or effectively deliver a death sentence for hockey on Long Island.

Nassau voters rejected the bond, which would have raised household taxes by a modest amount. That puts the future of the Islanders franchise in doubt. Because you might not have been closely following Long Island municipal issues already, here’s five things to think about after Monday’s vote.

1.THE BEGINNING OF THE END

As much as fans might get a kick out of seeing Rick DiPietro trudging down the Long Island Expressway, the failed referendum doesn’t mean that the Islanders pack up right away. In an appearance Monday night, Islanders team owner Charles Wang said he was “disappointed” and “heartbroken” but also said the Islanders were committed to honoring their lease, which runs through 2015. This means we’re in for quite the sideshow between now and then, whether it’s the continued municipal squabbling, or the embarrassing experiences that often accompany get-me-out-of-this-hell sales of sports teams. (Don’t forget that the Islanders have a bad track record when it comes to evaluating potential new owners. As this sad timeline notes, regarding two men facing securities fraud charges: “If convicted, they will become the third and fourth former owners of the New York Islanders franchise to serve time in prison.”)

Wang and Nassau County Executive Ed Mangano were hoping for low turnout, and they were counting on the passion of fans and the organization of unions. But the vote also fell smack dab in the middle of the charged national conversation about government spending, lending a greater sense of urgency and relevance to opponents of the measure. Despite bad weather and the inconvenient date, more voters than expected showed up at the polls. And they made their point loud and clear — no higher taxes.

Wang tried to make this referendum seem like an ultimatum, but he also was careful not to appear too aggressive or threatening. That’s why it seems like there is a chance something could be worked out, even though he’s said there’s no Plan B. Still, seeing Jacobs pledge that “Nassau will get a new Coliseum. It will be privately funded.” as if it’s simply that easy makes anyone remotely familiar with the bureaucratic time-suck that was Wang’s proposed (and privately financed) Lighthouse Project chuckle. If not Nassau County, there are nearby options like Brooklyn (see below) or neighboring Suffolk County, where helpless Islanders fans had to watch the vote from the sidelines. Should Wang sell or relocate the team, there are mentions of eager Kansas City and hungry Quebec, though as Brian Stubits points out, there are roadblocks with those options, too.

The vote returns had scarcely been counted by the time many settled on that most universal of solutions: “Move to Brooklyn!”

With a brand new arena rising in Atlantic Yards that will soon hold the Brooklyn _______s, it seems like an obvious fit. But fit is actually exactly the problem: the arena’s original design was tweaked (as these things always are) to lower costs, and the result is less than ideal. The ice surface could be regulation size, but so many seats would have to be taken out to make it so that the arena would end up with the smallest capacity in the league. And the Isles would be the Barclays Center’s lowly second tenant. Those are worrisome limitations for a franchise trying to forge a fresh start.

It’s hard not to feel bad for the Islanders. The much-talked-about Nassau Coliseum lease that the team says it will honor is a monstrous agreement that has held the team underwater for years. The franchise itself has been reduced to a middleman, squeezed in between a county that owns the arena and a management company that pocketed most of the operational revenues. Only in December of 2009 did Wang manage to wrangle a sublease that gave the franchise control of arena operations. The team’s finances remain incredibly limited. The Islanders are one of several teams in the NHL that have to actively worked to boost payrolls to meet the cap floor. (Their recent trade for the veteran Brian Rolston helped in that respect — while also helping their divisional rival New Jersey Devils.) So the cycle continues. They have one of the league’s most scary-good young talents in John Tavares, but he will become a restricted free agent after this upcoming season. With the franchise’s future so unmoored, why should he, or anyone, want to remain tied to the ship?

Previously from Baker:
Table for Two
Wedded Blitz
No Place Like Home?