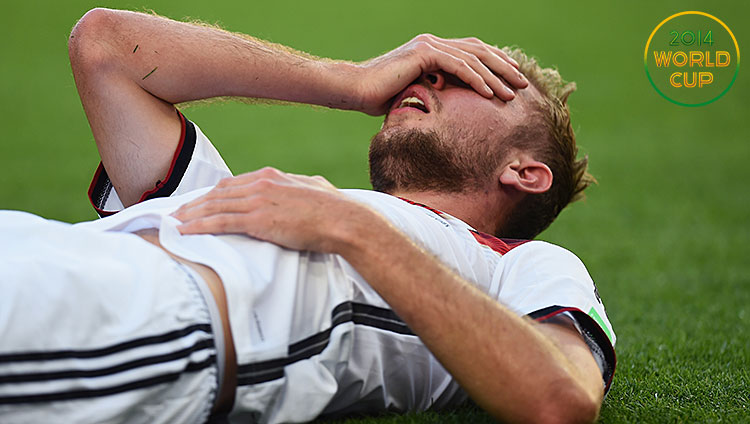 FIFA’s concussion protocol was one of the few blemishes on an otherwise wonderful World Cup. On Sunday, the process failed on the biggest stage. Midway through the first half, 23-year-old German midfielder Christoph Kramer suffered what appeared to be a likely concussion when he was struck by Argentine defender Ezequiel Garay. After being briefly evaluated, Kramer returned to the match for several minutes before being substituted. Kramer required help as he left the pitch and had the familiar faraway look of somebody who had suffered a brain injury:

As somebody who primarily writes about (American) football, I obviously think a lot about concussions and the processes used to deal with head trauma. FIFA received plenty of criticism on social media for allowing Kramer back onto the pitch, and I don’t disagree with the criticism. In thinking about what FIFA did wrong, though, I really struggled to come up with a solution that addressed the time it takes to properly diagnose a concussion without either radically changing the sport or notably impacting the competitive balance of the game. For each thoughtful, logical suggestion I’ve seen, there’s a relatively simple way to exploit or manipulate it to go against the letter of the law. I think I have a solution that makes sense, but it’s about the ugliest one I can imagine for game flow.

The suggestion I’ve seen most frequently is to allow teams to have a fourth substitute, specifically in the case of a possible concussion. No matter how this is implemented, it would be easy to exploit. If a team wanted to use a fourth substitution, it would be very easy to signal to a player on the pitch to fake a head injury upon marginal contact, just as NFL (and surely soccer) teams have veteran players fake or exaggerate cramps or minor injuries in key moments.

Naturally, one way to mitigate some of the faking would be to have an independent doctor on the sideline to examine each possible concussion. That’s certainly better than team doctors, but it doesn’t make implementing the fourth substitute any easier.

When do you make the change? If a player complains of concussion-like symptoms, he is swapped out for a substitute and examined on the sideline. If it is decided he is concussion-free, the substitute can remain on the pitch, unpenalized for cheating. (Some suggested that the fourth substitute could then be taken out of the match or otherwise carded, which would not matter if the game was already over by the time the concussion protocol was completed, and would still give the team a fresh player for the length of the concussion testing.)

If it’s after the player tests positive for a concussion, the team of the concussed player will still have spent some amount of time having playing a man down, because of the injured player. That’s already the reason why concussed players come back onto the pitch, as Kramer did Sunday. And that’s without wondering whether “independent” doctors would actually be reliable and scalable across the wide financial swath of leagues under FIFA’s purview.

You would then have to implement some measure of punishment for players or teams that had been found faking or otherwise exploiting the loopholes. One such suggestion was to force players who come off the pitch with a concussion to be kept from participating in the next match or for the subsequent week. Again, though, that’s both very beatable and reinforces bad behaviors.

There’s no doubt teams would happily take a fourth substitute late in a desperate moment during a key match (like, coincidentally, the World Cup final) even if it meant losing that player for a match or two to come. Furthermore, knowing that coming out of a match with a concussion would cost them playing time in future matches, players would undoubtedly remain hesitant to leave the pitch.

What if, as some suggested, the substitute benefit lent itself to both sides? That would see both teams given a fourth substitute if one team required a concussion sub. It’s certainly the fairest option of them all. My only concern with this would be the possibility of incentivizing a team in need of a fourth substitute to try to concuss a player. Say you’re late in a match, out of subs, and have a winger with a balky hamstring who doesn’t have much left in the tank. Normally, you would be stuck either having that player limp around or actually have him leave the pitch to play on with 10 men; now, though, not only would you have a way to get an extra substitute, it would involve injuring a member of the opposition.

Granted, concussing a member of the opposition is a good way to get red carded, but it’s hardly a sure thing that a foul would be called. Remember that later in the World Cup final, goalkeeper Manuel Neuer came running to the edge of his box and very nearly connected with a knee to Gonzalo Higuaín’s skull. Higuaín was called for the foul.

It’s also true that there probably isn’t a perfect solution, and we shouldn’t settle for what is clearly a piss-poor concussion protocol because other options might be exploitable. In the end, though, I think the best way for FIFA to handle concussions is the least elegant option: to stop play. If a player appears to suffer a brain injury, FIFA should stop the match to allow the player to receive the appropriate concussion testing from an independent doctor on the sideline. If the player has a brain injury, then he should be removed from the match, with no fourth substitute made available. The time lost during the concussion tests can be made up during stoppage time. It’s still an imperfect option, but I think it’s the best combination of retaining a fair level of play while keeping player safety a top priority.