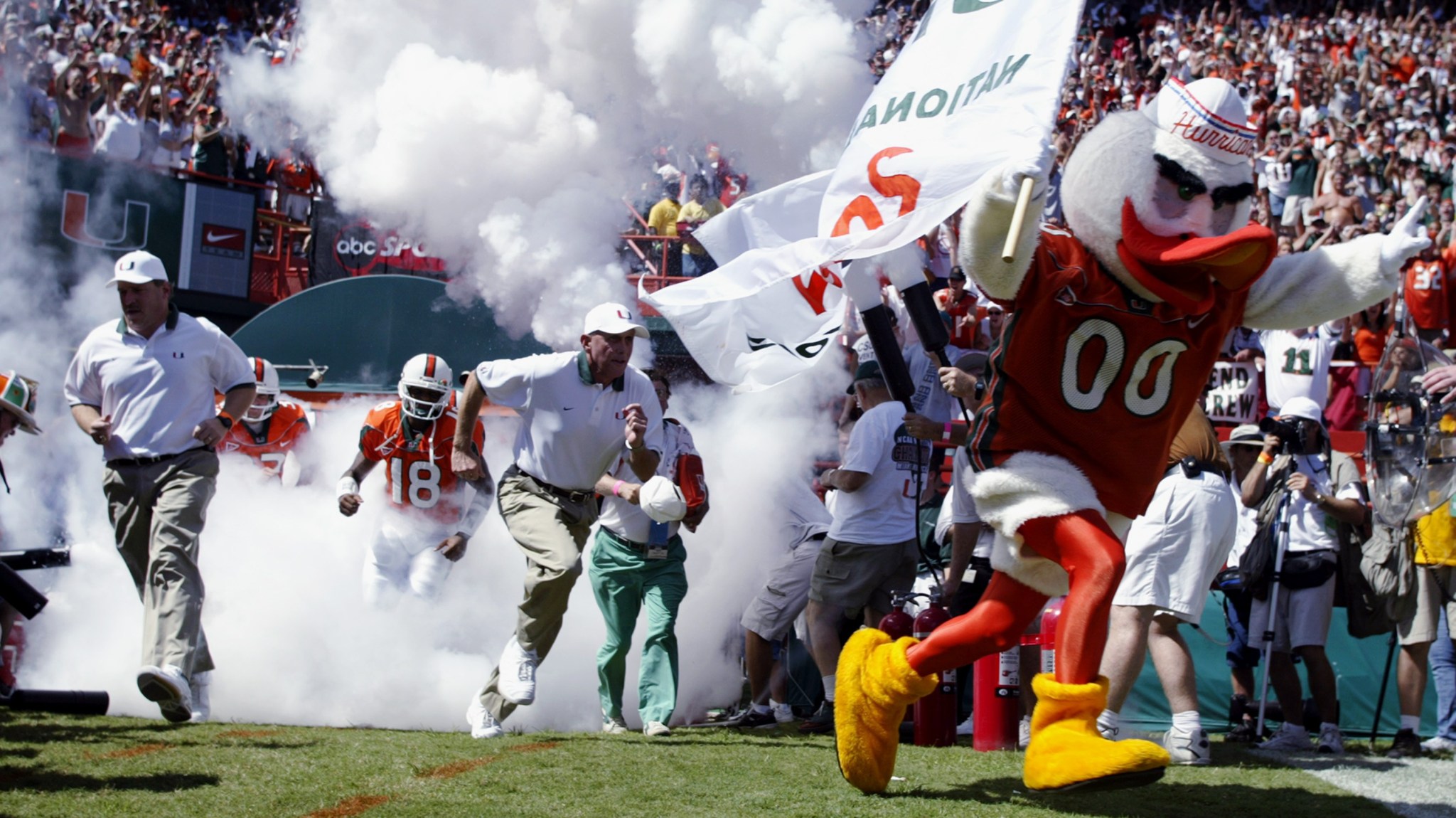 When you ask someone what they remember about the University of Miami teams from the early 2000s, you get all kinds of different responses, depending on whom you’re talking to.

A younger person will definitely mention swag, because no football team in the past 25 years personified that word better. They picked up exactly where the older teams left off. The Miami teams made football look more fun than anyone has before or since. They knew they were better, they didn’t try to hide it, and then they’d go and beat the crap out of people, celebrating a little more obnoxiously as each game got more and more out of hand. They made uniforms cool long before Oregon did, and it seemed like half the team had these multicolor visors that nobody else in the country could use. Only The U was cool enough to rock those.

An older, more joyless college football fan will be quick to bring up the Nevin Shapiro scandal. Remember when Yahoo Sports released that bombshell of an investigation based almost entirely on the testimony of a Ponzi schemer in jail? To a lot of people, that was the asterisk to invalidate all that dominance in the early 2000s, and even before that. That was the massive scandal critics had been hoping for since that first Sports Illustrated cover.

An NFL scout would get all wide-eyed remembering how much talent those teams had in the early 2000s. It was like Kentucky basketball as a 70-man roster. If they were getting paid, it wasn’t enough. Future superstars were stuck as backups, everyone was faster than anyone else in the country, and they competed against the best every day for years at a time. For a good five years, “take the guy from Miami” was one of the best NFL draft strategies anywhere.

An Ohio State fan would mention the upset in 2003.

A Nebraska fan would start shaking violently remembering the slaughter in 2002.

I would mention this video.

It’s so f***ing insane and awesome, and that’s the best possible description for those Miami teams. That’s all you need to know.

If the conversation went a little deeper than that — and we might as well take it a little deeper than that, since ESPN is running The U Part 2 on Saturday at 9 p.m. — I would say that most people miss the point when they talk about The U. The swagger was very real, but swag is a word that has been co-opted and ruined by people like Justin Bieber, and reducing those Miami teams to that one stupid word doesn’t do them justice.

This wasn’t just the 2001 version of the stacked FSU team that won a title last year. That roster was full of five-star recruits. Miami started out as a team full of underdogs in the late ’90s. The program was stuck on probation, the team had bottomed out on the field, and Butch Davis was dealing with scholarship sanctions that limited how many guys he could even add. Guys like Al Blades and Clinton Portis and Santana Moss weren’t committing to a powerhouse. Moss had to take a track scholarship because Miami didn’t have any left for football.

Most of the players came out of nowhere in the beginning. One of the best pieces of sports journalism I’ve ever read was a profile of Miami’s offensive line from Pat Jordan in 2001, and it includes this about the origins of that group:

Only the three black players — Bryant McKinnie, 22, a 6-9, 335-pound senior tackle; Ed Wilkins, 22, a 6-4, 318-pound junior guard; and Vernon Carey, 20, a sophomore tackle who goes 6-5, 363 pounds, had parents born here. The parents of the four white linemen were born abroad: in Canada (Brett Romberg, 22, a 6-2, 290-pound junior center); Cuba (Joaquin Gonzalez, 22, a 6-5, 292-pound senior tackle); Poland (Martin Bibla, 22, a senior guard who is 6-4, 300); and Iran (Sherko Haji-Rasouli, 21, a 6-6, 326-pound junior guard). Romberg, of Norwegian ancestry, speaks Norwegian, Lithuanian, Serbo-Croatian, some Spanish and English. Haji-Rasouli speaks Persian, Spanish, some German and English. Bibla speaks Polish, Russian and English. Gonzalez speaks Spanish and English. They have taught one another vulgar expressions in each of their many languages.

Carey was the top high school lineman in the country in 1998, but none of the others were so highly recruited. Bibla and Romberg were considered too small. Haji-Rasouli was thought to be fat and lazy. Even McKinnie wasn’t highly rated. Prohibited from playing in the Pop Warner League at 12 — because at 6-2, 220-plus, he was too big — he didn’t even play football until his junior year of high school. Instead, he joined his mother’s step-aerobics class and played the bass drum in the band until his coach, seeing him on the field, drafted him onto the team. Gonzalez is the most unlikely of the bunch. He went to Miami not as a football player but as a student, winning an academic scholarship (and turning down Harvard in the process). He made the team as a walk-on.

That line gave up three sacks in 21 games.

All sports tend to put coaches on a pedestal, football especially. Someone like Nick Saban is described with the same awe and fawning that tech people have for Steve Jobs. At Miami, the players policed themselves. When Butch Davis left for the Browns, the players went to the athletic director to lobby for Larry Coker to take over, basically so they could just coach themselves.

“They handled their own discipline,” one of the assistants told Fox Sports earlier for an oral history this year. “I’d start talking and Ed Reed would cut me off, like ‘I don’t mean any disrespect … ‘ then he’d handle the lecture for me. And I’m like ‘Damn, ok.'”

As Reed remembers: “We told coach, ‘If anything happens with the players on the team, coach, we got it. Don’t you worry about it.'”

They did it with trash talk and celebration penalties and pushed down the hallway screaming MURDER MURDER MURDER, but don’t let that distract you from what they were actually doing.

This was a team that handled its business in the most clinical, professional way possible, and they did it for three years straight. As one corner explains it, “I played six years in the NFL and the hardest I ever worked was at Miami.”

Or as one lineman remembered, “Saturday morning at eight a.m., no matter how hungover you were, you are on the field. At any other school a guy might show up at 8:05 with his shoes untied or something. Not at Miami. No, if you didn’t show up at 7:55 ready to go, you got shunned. Nobody wants to talk to you, because you think you’re so much bigger than the group.”

One of the coolest things in sports is watching a team that becomes better than the sum of all its parts. One of the dumbest things in sports is that we only celebrate those teams when they fit a specific mold. Everyone loves teams that are scrappy overachievers you’ve never heard of — generally code for “white” and/or “not very good” — but if players get too good or too confident, teams like Miami get turned into villains.

That’s fine, obviously. It turned them into cult heroes who were adored for different reasons. It’s why ESPN’s running a second documentary on them. People can remember those Miami teams however they want. All that matters is they were unforgettable.

But for me, when it’s time to remember Miami, I’ll think back to Al Blades in that video above, and Reed in this video.

Then I’ll remember that Ed Reed was the son of a welder outside New Orleans, a two-star recruit who was supposed to be too small and too slow to play major college football. Clinton Portis was raised by a single mother in Laurel, Mississippi, and then Gainesville, Florida, and his older brother went to federal prison. When it was time to go to college, he had scholarship offers from Miami, Howard, and the University of Florida, who wanted him to play defensive back. These are the guys who made The U what it was.

They set a standard for themselves, fed off each other’s insanity, and pushed each other every day. It turned into the most dominant, relentlessly entertaining football team we’ve seen in decades, and when it was over, a lot of them turned into millionaires.

Watch this video again, and watch The U Part Two this weekend, and think about exactly why it was all so cool.

The Book of Daniel