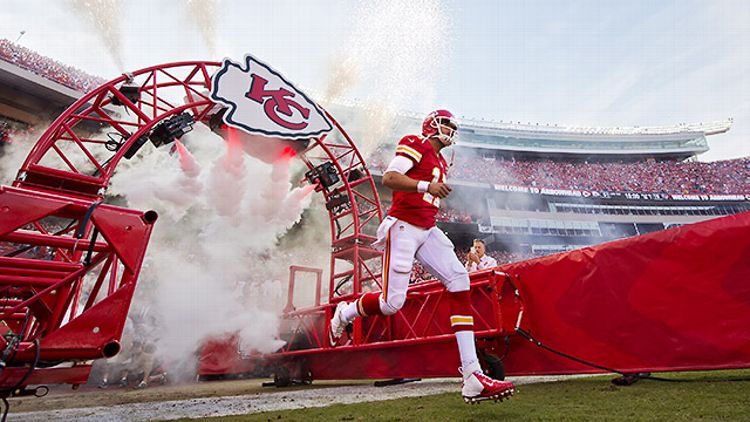 Happy Halloween! While you’re out trick-or-treating, I’ll be inside watching Bengals-Dolphins, mourning Giovani Bernard’s sad failure to launch. I thought we’d be talking about him as a fantasy stud by now, but Marvin Lewis remains stubbornly committed to BenJarvus Green-Ellis. Lewis, bless his heart, probably still uses the Zune he bought in 2006. Some flowers were never meant to bloom, I guess. To cheer you up, here is a picture of Bill Belichick and his wife:

Patriots coach Bill Belichick dressed up as a pirate for Halloween – http://t.co/p9M3dxA9gU pic.twitter.com/LBAr8DdLk5

Anyway, there’s a lot to cover this week, and I can’t bear to think about Bernard’s untapped potential any longer, so let’s dive right into the Week 9 preview. Oh, and pray for Bill’s wife while you’re at it.

• QB Alex Smith, Kansas City Chiefs: Even though Smith boasted a pristine rating at the time of his 2012 benching, smart fans supported Jim Harbaugh’s switch to Colin Kaepernick because of Smith’s severe limitations as a downfield passer. Smith embodied the “game manager” cliché, while Kaepernick’s upside was simply too great to ignore. Nevertheless, Smith WAS spectacular exactly once last year: against the Bills, whom he’ll face again this Sunday.

In that 2012 contest, Smith passed for 303 yards and three touchdowns, amassing 28 fantasy points in by far his best outing of the year. The 2013 Bills have surrendered a whopping 11 touchdowns and an average of 24 fantasy points per game to opposing quarterbacks over the past three weeks, so if Smith isn’t owned in your league, he’ll make a fantastic bye-week replacement for Peyton Manning, Matthew Stafford, or Kaepernick.

• RB Ryan Mathews, San Diego Chargers: Heading into the season, a sizable faction of owners flatly refused to draft Mathews. And rightly so! Mathews, a chronic underperformer and a regular on the injury report, earned his status as one of the most unhip players in fantasy sports. If you read anything about fantasy football in the offseason, you undoubtedly discovered that Mathews had more broken collarbones (two) than touchdowns (one) in 2012, which is a pretty damning stat for anyone (even YOU), let alone a former high first-round NFL draft pick. In fact, I suspect Mathews was exclusively selected in online drafts, because uttering his name in front of real live people would’ve resulted in more ridicule than any human being can reasonably withstand.

However, so many folks took a hard anti-Mathews stance that the brave souls who deigned to draft him ended up netting some good value. With an ADP of 58, Mathews was selected after the likes of Lamar Miller, Montee Ball, and Darren Sproles, all of whom he’s comfortably outscoring so far this season. Four of Mathews’s seven outings have been double-digit affairs, and PPR maven Danny Woodhead hasn’t undercut Mathews’s workload whatsoever. With a tantalizing matchup against the RB-friendly Redskins, don’t be shocked if Mathews finishes the week as a top-10 back.

I really hope Tate continues his taunting ways, and Week 9 presents an excellent opportunity for more finger wagging. But before we get to the matchup, let’s quickly recap why Tate is the best troll in professional sports.

• He went to Notre Dame.

• In June 2010, he received a warning by Bellevue, Washington, police for trespassing in Top Pot Doughnuts, home of some “irresistible” maple bars. Tate and his friends snuck into the café to sample pastries at 3 a.m., four hours before the store opened. Pete Carroll’s reaction: “I do understand the allure of maple bars.” This could’ve spawned the best #HotSportsTake of all time.

As for Tate’s fantasy worth: Sidney Rice is on IR and Percy Harvin was held out of practice yesterday despite being initially “on track” to play in Week 9, so Tate might be Russell Wilson’s only legitimate receiving option against the Bucs. As such, I’m not too worried about the Revis Island implications, because it’s not like Doug Baldwin is going to have a monster game. (OK, let me rephrase that in case a miracle happens: Doug Baldwin is very, very unlikely to have a monster game.) Anticipate a heaping platter of targets for Tate, who’s inherently motivated to satisfy his fantasy owners.

What are y'all's thoughts on my fantasy squad? pic.twitter.com/ZFdg1xa6do

Serious question: If Tate were to suffer an injury in practice or something, do you think he’d try to trade himself to an unsuspecting leaguemate before word got out?

Ever since Mike Tomlin’s draconian shuffleboard ban, the Steelers have allowed just 154 passing yards per game to opposing quarterbacks. Unlike Pittsburgh’s Week 8 opponent Terrelle Pryor, Brady couldn’t pull off a 93-yard touchdown run if he got a 70-yard head start. Brady may eventually resume producing like the top-five quarterback he was drafted to be, but it won’t be this week. I’m not calling him a coward, but …

• WR DeSean Jackson, Philadelphia Eagles: Jackson’s fantasy worth basically comes down to which Nick Foles you expect to show up on Sunday: the one who torched Tampa for 296 yards and three touchdowns, or the absolutely abysmal one from two weeks ago. I’m leaning toward the latter. Unlike the Bucs, the Raiders have ample regular-season tape on Foles, and it’s hard for me to take anything that happened against Greg Schiano’s MRSA factory seriously. Moreover, Jackson’s once-lofty yardage totals have come back to earth like a flailing Sandra Bullock, and a tweaked ankle won’t help matters. Time for a BOLD PREDICTION: Fellow Cal alums Keenan Allen and Marvin Jones will outscore Jackson in Week 9. Well, at least one of them will.

• TE Greg Olsen, Carolina Panthers: There’s plenty to ridicule about Atlanta’s dumpster fire of a season, but let’s give the Falcons props for allowing the lowest yards per game to tight ends in the NFL. As such, it’s tough to see Olsen being much of a factor here, since his fantasy value will be almost entirely touchdown-dependent. Olsen has scored only two on the year, so bench him if you have another option this week.

Fantasy Bonanza of the Week: Saints at Jets

The vast majority of you probably bailed on Bengals-Jets before Marvin Jones declared Paul Brown Stadium a sovereign nation under his rule, so maybe you’re wondering how Chris Ivory followed up Week 7’s 34-carry, 104-yard effort.

No, that’s not a typo: MATT SIMMS outgained Ivory. Significantly. Sometimes the universe works in wonderful, mysterious ways, and we just have to take a step back and appreciate it. Basically, Matt Simms is aurora borealis.

As you can see, Bilal Powell didn’t fare much better than Ivory, so the possibility remains for another Ivory-heavy day. And don’t discount the revenge factor here; Ivory can downplay it all he wants, but he has to harbor some resentment toward the Saints for dealing him. Maybe he’ll demand an extra dose of carries to really make Sean Payton feel the crushing pain of regret. Who knows? Regardless, it’s worth noting that the Saints’ run defense is decidedly worse than their pass defense, and that the Jets have this really weird pattern going where they look like shit one week and semi-decent the next. If past results hold true, this will be a semi-decent week, which means Ivory and Powell are acceptable flex plays.

As for the Saints: I wouldn’t drop Marques Colston yet, but I’d be pretty damn close, especially considering Kenny Stills’s recent surge in production. Stills still isn’t being targeted enough to justify a starting spot (unless you’re stretched really thin because of byes and/or injuries), but he deserves to be owned on account of his big-play ability. And if you misguidedly benched Jimmy Graham last week, take solace in the fact that you were not alone. But more importantly, don’t make the same mistake again. If Graham is active, he starts. End of story. Machines are not subject to the same anatomical laws as humans, and Jimmy Graham is a damn machine.

Remember when Michael Vick went apeshit on the Redskins in 2010? Thrust into action in Week 1, Vick had been the fantasy surprise of the season, and it all culminated in that ridiculous Monday Night Football performance. The resurgent Philip Rivers will reach a similar peak against Washington. Don’t get me wrong: Rivers will continue to play well and post QB1 numbers the rest of the way, but it won’t get any better than this. Drew Brees, Aaron Rodgers, and Cam Newton are the only quarterbacks I’d start over Rivers in Week 9, because when a defense makes Josh McCown look viable, it must be exploited at all costs.

• QB Jake Locker, Tennessee Titans (available in 83 percent of ESPN.com leagues): Didn’t win your league’s Andy Dalton bidding war? Not sold on Terrelle Pryor’s ability to replicate his Week 8 rushing numbers? Well, have no fear! Jake Locker has scored 21, 18, and 27 fantasy points in his last three games, and shouldn’t disappoint coming off a bye. Additionally, the Rams are on a short week and may be a bit demoralized following the whole Golden Tate incident. Janoris Jenkins doesn’t seem like a guy who’d take too well to derision, and he’s received a ton of it over the past fortnight.

• RB Mike Tolbert, Carolina Panthers (71.1 percent): I’m definitely not the world’s biggest Mike Tolbert fan. You probably aren’t either. But talent aside, Tolbert is a serviceable (if low-end) flex play. He puts in work in the red zone; just avert your eyes when he gets a carry between the 20s. It is not pretty, but the results (sometimes) are.

• RB Brandon Bolden, New England Patriots (96.6 percent): If you’re in a deeper league, the prospect of landing Tolbert may be a pipe dream. While your running back options must be frighteningly slim, Bolden is the best bet to score a fluke touchdown. He’s done so in back-to-back weeks, and these things usually come in threes.

• WR Drew Davis, Atlanta Falcons (99.4 percent): On Tuesday, I said I couldn’t recommend Davis with a straight face. I still can’t. So instead I’m going to present a couple of facts, and you can interpret them however you choose:

• Matt Ryan is on pace for an unprecedented number of passing attempts.

• If White doesn’t play, Davis will be the Falcons’ second-best receiver.

• Eddie Royal led all receivers in fantasy points for two weeks, which means anything is possible.