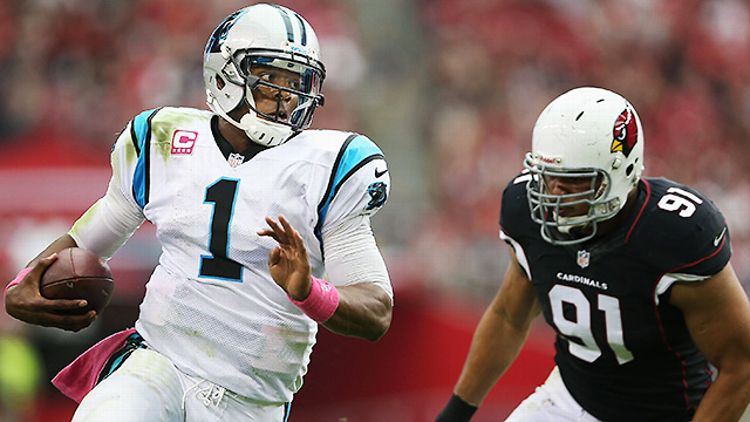 Before we talk about the upcoming slate of games and their fantasy implications, a quick note of mourning:

From a fantasy standpoint, Brian Hoyer’s torn ACL slightly decreases the value of Jordan Cameron and Josh Gordon, because Brandon Weeden is Pete Wheeler from Backyard Sports (minus the speed). No, the transition from Hoyer back to Weeden will not be seamless.

Personally, I haven’t been this devastated since … well, ever. If my tips seem imbued with a hint of rage this week, know that it’s because I’m currently incapable of controlling my emotions. Kind of like Julio Jones owners, who must find a way to replace fantasy’s sixth-best receiver if they want a shot at playoff glory. Or like the folks who drafted David Wilson in the second round and probably now spend their free time banging their heads against a wall. You get the picture.

On the bright side, we’re not dead. On the less bright side, that puts us in the company of Mark Sanchez, which is even worse.

"Mark Sanchez is not dead," says Rex Ryan, the coach who kind of killed him: http://t.co/xyoq4Gvv6Q

I’ve seen some mind-blowing stats in my day, but nothing quite like this: Eli Manning (63 fantasy points) has outscored Cam Newton (62) this season. Granted, the Panthers being on a bye in Week 4 has a lot to do with this, but still: Cam Newton has fewer fantasy points than Eli Manning! The same Eli Manning whose season has been a series of derpy GIFs, gift-wrapped picks, and trade rumors involving Hakeem Nicks! Suffice it to say, owners who spent a high pick on Newton have a right to feel cheated.

They shouldn’t give up hope, though. Newton overcame a slow start last year to finish fourth overall in fantasy points, and we can expect a similar turnaround in 2013. He’s too talented to fail to rise up the quarterback leaderboard, and the shaky Vikings could trigger Newton’s ascent beginning this week. Minnesota’s defense surrenders an average of 17.5 fantasy points to opposing quarterbacks, and hell, the Vikes birthed HOYER THE DESTROYER, so anything is possible here.

PSA to disgruntled Michael Vick owners: Buy low on Newton if he’s available, because impatient leaguemates are ripe for swindling.

FACT: He’s a Schiano Man through and through, so owners don’t need to worry about Martin ever receiving the Josh Freeman treatment.

FACT: His miserable Week 4 performance came during rookie quarterback Mike Glennon’s debut, which is likely not a coincidence.

FACT: Martin still saw mad carries (27, to be exact) during that miserable Week 4, meaning he’s clearly the focal point of Tampa’s offense. Usually a workload this heavy leads to at least one touchdown.

FACT: Week 6 offers a perfect storm for Martin to start playing like the top-five pick that he was this season: The Bucs are coming off a bye, and they get the lowly Eagles at home.

According to Roto Arcade’s indispensable Skinny feature, Torrey Smith leads the NFL with 16 catches of 15-plus yards. This week Smith faces the Packers, who’ve allowed 33 completions of 15-plus yards, second-most in the NFL.

In an unexpected turn of events, Smith has blossomed into a remarkably consistent wideout, shedding his boom-or-bust label and leaving a glimmer of hope for despondent Mike Wallace owners. Moreover, even if rookie receiver Marlon Brown plays despite his strained hamstring, he’ll probably be limited. Expect a WR1-caliber performance from Smith.

It’s decidedly against the laws of nature to recommend sitting someone who’s facing the Jaguars, but I think the softball matchup might be a curse in Moreno’s case. Once the Broncos jump out to an insurmountable lead, why wouldn’t they replace him with Ronnie Hillman and Montee Ball for the remaining three quarters? Denver-Jacksonville is basically Louisville-FIU, so a low-volume day is likely in store for Moreno. If he doesn’t score a touchdown in the early going, fantasy owners will suffer.

Megatron’s status remains up in the air because of lingering knee pain, making his matchup with Joe Haden especially unfavorable. If Johnson plays, anticipate an outing similar to the one he had against Peanut Tillman (four receptions for 44 yards). Unless Haden is taking introductory geography courses in his spare time, he appears incredibly determined to reach the Pro Bowl, and shutting down the NFL’s top receiver would certainly help his cause.

While Miles Austin’s tattered, decaying hamstrings made Williams a high-priority waiver wire target this week, all reports indicate that Austin is good to go for Sunday night. Williams’s long-term upside is significant, but a healthy Austin will undercut the youngster’s production in the short term. Don’t start Williams until he establishes himself as Dallas’s clear-cut WR2, which should happen in a matter of weeks. Also, Williams is really, really good at re-tweeting inspirational quotes.

San Diego has played a good but not great collection of quarterbacks in Matt Schaub, Michael Vick, Jake Locker, Tony Romo, and Terrelle Pryor, but the Chargers have surrendered 24.2 fantasy points per game to those passers, second most in the league. Andrew Luck will increase that average on Monday night, because the Chargers have likewise struggled mightily against every type of receiver imaginable, which of course is music to the ears of Reggie Wayne and T.Y. Hilton owners. Coby Fleener didn’t really get in on the action in last week’s takedown of Seattle, but he remains available in 75 percent of ESPN.com leagues and makes for an adequate Tony Gonzalez substitute during Atlanta’s bye week.

Meanwhile, the over/under for Trent Richardson’s yards per carry is a sky-high (for him) 3.5, and I’m actually going to take the over considering San Diego is conceding 4.9 yards per rush. Keenan Allen will continue to make a fool of GMs who red-flagged him because of reefer madness, while Danny Woodhead will continue to humiliate me for dropping him in my PPR league.

Hear me out! Although Schaub’s pick-six streak is clearly controlled by astrological forces and his house isn’t exactly a hot trick-or-treating spot this year, Schaub has still managed games of 23, 19, and 18 fantasy points. Gary Kubiak called sticking with Schaub a “tough decision,” which is a charitable way to describe the conundrum facing the Matt Ryan owners who think Schaub might be an undervalued bye-week sub, but don’t want to watch the world burn. However, I think we can expect a rebound performance from Schaub this week. The Rams’ pass defense is exceedingly QB-friendly, and he must perform well to save his job.

With Wilson out, the Giants’ backfield will be some ungodly Scott/Brandon Jacobs platoon tonight. To clarify, I’m not saying Scott will be productive. I’m saying that at least you can count on him to catch a few passes and pray one of them comes near the end zone. Sadly, this is more than I can say about the vast majority of widely available running backs.

If you’re looking for a receiver to permanently assume Jones’s roster spot, Pettis is not your man. You’d be better off adding Allen, Williams, or Justin Blackmon, because at least there’s a chance (however small) they can occasionally replicate Jones’s titanic production. But if those guys are already claimed, or if you just don’t like their prospects this week (as I don’t with Williams), Pettis is a dependable option who’s morphed into Sam Bradford’s security blanket. Nick Wagoner notes that “of Pettis’s 22 catches, 14 have gone for first downs and four more have gone for touchdowns.” Pettis’s numbers aren’t gaudy, but neither were Matt Saracen’s.