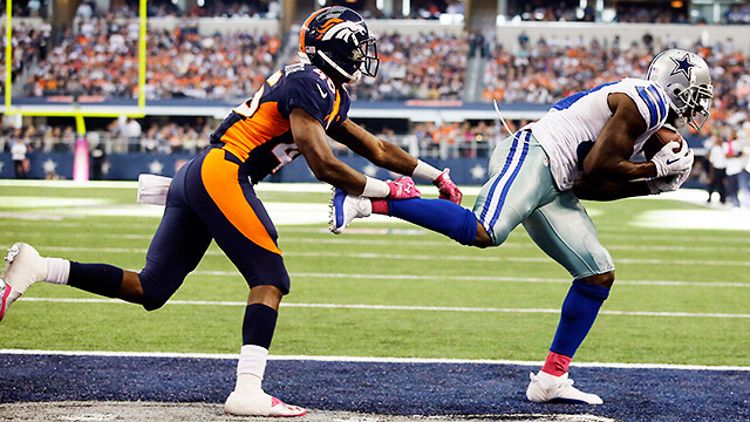 Daniel Radcliffe named his fantasy football team Barkevious Mingo’s Mum, and now that I know that, my life is complete. Wizards are surely mankind’s finest fake football players, and they apparently boast unrivaled team-naming prowess, so we can assume that Danny Rad took Peyton Manning first overall, eschewed disappointing backs like Stevan Ridley and David Wilson, and scored Jordan Cameron and Julius Thomas late. We muggles? We didn’t do so hot.

Remember, this is what first rounds tended to look like just one month ago (per Fantasy Pros):

PPR leagues were only slightly different: Megatron went two spots higher on average, and Matt Forte replaced Brees in the top 12. Many of these picks have disappointed in some way or another, and unless you nabbed Peterson, Charles, Lynch, McCoy, or Brees/Forte, you probably feel a twinge of regret about your selection.

As such, the time is especially ripe for a redraft exercise. Five weeks of football gives us enough of a sample size to establish an ideal first round, which of course is always subject to change. While you can’t retroactively un-pick Morris without the aid of a time-turner, you can look back and diagnose your mistakes so as to never, ever make them again. Apply what you’ve learned to future situations, and maybe one day you’ll be able to draft like Harry Potter.

Knowing what we now know, here’s how the first round should have gone.

The first five picks are no-brainers in retrospect. Manning has already scored an absurd 155 standard-league points, 41 more than the next-best player (Brees), and he’s on pace to surpass Tom Brady’s prolific-ass 2007 season. We’ll have to wait and see if Manning can maintain these numbers once fall turns to winter, but I’m not betting against him.

You could go in a number of directions at 10, though I’d lean toward Foster because (a) running backs are SCARCE AS HELL, and (b) he’ll be an even greater force in Houston’s offense with the suddenly shitty Matt Schaub (or the perpetually shitty T.J. Yates) at quarterback. Reason A also explains Bush at 11, and Megatron’s potential is too great to pass up at 12. You could make an argument for DeSean Jackson or Wes Welker there, but Jackson suffers from Michael Vick’s injury concerns and Welker’s touchdown rate is unsustainable.

Well, there you have it. Pretty sure that’s what the Sorting Hat would spit out at Hogwarts.

• Well, This Was More Inevitable Than Death or Taxes

Michael Vick suffered a hamstring injury against the Giants, but any soothsayer worth his salt could’ve predicted this months in advance. The surprising part was that Nick Foles actually played well in relief, engendering talk of a quarterback controversy. Foles will probably start this week in Tampa, and coach Chip Kelly says Foles could permanently replace Vick if he “puts on an unbelievable show.”

Is Foles capable of putting on an unbelievable show? Is the Pope Catholic? Oh wait, he is? Never mind, then. The Bucs’ defense is exceptional, and Jackson’s salsa dances are decidedly unwelcome on Revis Island. I imagine Vick will eventually regain the starting job, but I also imagine he’ll get hurt again. If you didn’t trade him yet, wait until his value rises and then immediately flip him for 75 cents on the dollar.

• This Guy Is Playing Some Historically Inept Football

Fun fact: If pick-sixes counted as touchdowns (and when you really think about it, they should), Schaub would have as many as Brees. DREW BREES. Remarkably, 5.6 percent of fantasy teams on ESPN.com are still starting Schaub, which can mean only one thing: Gary Kubiak plays a lot of fantasy football. He probably likes it more than real football because clock management isn’t a concern.

No, this isn't at Richard Sherman's house. It's at a Houston area restaurant. pic.twitter.com/lo32Cg4kBS

• He Probably Did This on Your Bench, But It Was Still Awesome

Alshon Jeffery’s performance (10 receptions for 218 yards and a touchdown) was breathtaking and virtuosic and totally bonkers, but who in his or her right mind was starting Alshon Jeffery last week? As I noted in my Week 5 preview, Football Outsiders ranked the Saints tops in the league against no. 2 wideouts; needless to say, Jeffery doesn’t put as much stock in such rankings as I do.

It remains to be seen if Jeffery is an inconsistent wonder like DeAndre Hopkins (who’s scored only 10 fantasy points since his Week 2 breakout) or a legit complement to Brandon Marshall, but I’d lean toward the latter. With a pair of woeful pass defenses looming on Chicago’s schedule in the Giants and Redskins, expect the newfound Jay Cutler–Jeffery connection to get even steamier.

• Hey, Look Who Showed Up This Week

Ray Rice gets this award for remembering he was a first-round pick, but really, John Harbaugh was the one at fault for Rice’s measly pre–Week 5 production. Rice’s 27 carries against Miami nearly equaled the 30 he saw in his three prior games combined, and though his 74 yards left a lot to be desired, he reached the end zone twice. All’s well that ends well, I guess. The best news of the day for Rice owners was that the Ravens won, which means Harbaugh will likely employ this Rice-heavy strategy going forward.

• Flexy and I Know It

Do you know any homeless people who drive Lamborghinis? If so, you’ll understand what I mean when I say the Jacksonville Jaguars are that homeless person, and Justin Blackmon is that Lambo. Despite the immense psychological and physical burden that stems from playing with Blaine Gabbert, Blackmon grabbed a 68-yard touchdown reception in Sunday’s opening minutes, marking the official point in time when he overtook Cecil Shorts as Jacksonville’s top fantasy option. With Chad Henne slated to start against Denver, Blackmon should post relatively decent numbers this week and deserves to be owned in wayyyyy more than just 20 percent of ESPN.com leagues.

1. WR Justin Blackmon, Jacksonville Jaguars (available in 80 percent of ESPN.com leagues): True, the ceiling is somewhat limited here because of Jacksonville’s wretched Gabbert-Henne duo, but at least the less wretched of the two is currently starting. And if underperformers like Mike Wallace or Roddy White have hamstrung your receiving corps, Blackmon could be a godsend.

2. RB Zac Stacy, St. Louis Rams (98.8 percent): I’m going to assume that you didn’t watch Rams-Jags, because I like to think my readers aren’t self-loathing masochists (or Sam Bradford’s parents). So, if you merely glanced at the box score for this one, don’t be put off by Stacy’s 14 carries, especially in comparison to Daryl Richardson’s 13. Stacy left the game with a rib injury, costing him a few touches, but has already been declared the Week 6 starter by Jeff Fisher. Moreover, he significantly outplayed Richardson (5.6 yards per carry to 3.7) and figures to be tremendously flexy in 12-team leagues. Sadly, he’s not much of a pass-catcher, though I’m sure he’ll find a way to net some receiving yards. You know what they say: Bradford has never met a screen pass he didn’t love to the moon and back.

3. RB Pierre Thomas, New Orleans Saints (84.5 percent): While Thomas miraculously saw 19 carries in Chicago, his 36 yards basically guaranteed that such an occurrence would never happen again. Nevertheless, he’s a viable receiver and worth owning solely because of that.

4. WR Keenan Allen, San Diego Chargers (98.8 percent): Like everyone else, I’m slowly coming to grips with the fact that the Philip Rivers renaissance is a real thing. Danny Woodhead is a respectable RB2 in PPR leagues, Antonio Gates is partying like it’s 2006, and Allen might be the most productive rookie wideout at season’s end. No, seriously. All of those things are true, yet none of them are funnier than Eddie Royal leading the NFL in receiving after two weeks.

5. WR Terrance Williams, Dallas Cowboys (98.7 percent): Miles Austin is a 29-year-old with the hamstrings of an octogenarian. Even at his healthiest, he’s not a better option opposite Bryant than Williams, who’s had double-digit fantasy performances in back-to-back weeks and figures to feast on the slew of crappy pass defenses that loom on Dallas’s schedule.

One Gigantic Bummer of an Injury Update

Jay Glazer is almost never wrong. Julio Jones is probably out for the year with a foot injury, leaving his owners to sort out the wreckage.

First and foremost: Wait to release Julio until he gets his second opinion tomorrow. Second, don’t get cute and assign Harry Douglas your first waiver priority; his talent is marginal, and maybe the Falcons just suck this year. Blackmon, Allen, and Williams are the only widely available free-agent receivers with the potential to occasionally replicate Julio’s big-play ability. The worst thing you could do is make a panic-button trade for, say, a WR2. Julio’s production is irreplaceable, and you must accept that fact now. White’s value will consequently increase (if he ever recovers from his high ankle sprain), as will Tony Gonzalez’s.

Julio owners, take heart. This too shall pass.