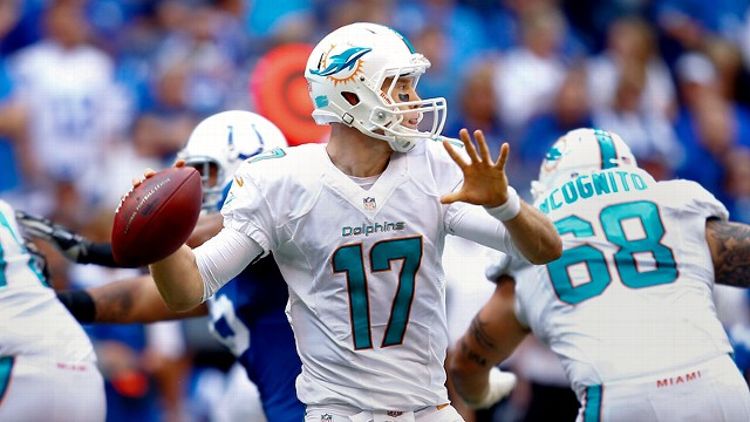 One of the NFL’s greatest traditions is the annual stream of quotes during the first organized team activities of the spring. Being back around teammates and back throwing and catching footballs is enough to get some players to say just about anything about why this year is their year. And no team was more bullish on itself this spring than the Miami Dolphins.

According to offensive coordinator Mike Sherman, Ryan Tannehill was going to be the most improved quarterback in the league. According to Brian Hartline, the Dolphins’ wide receiving corps was the best in the AFC East. Mike Pouncey simply said the Dolphins would be great. Well, through two weeks, none of those predictions seem wrong.

When the Dolphins were making those proclamations this past spring, and when Jeff Ireland went on his spending spree this past winter, the climate for Sunday’s game against Atlanta is what they had in mind. The money spent on Mike Wallace, Dannell Ellerbe, Brent Grimes, and Philip Wheeler was shelled out with the hope that with another year of development from Tannehill, the Dolphins would be the type of team that’s 2-0 and favored to beat a 2012 playoff team at home. The line for Sunday’s game is Miami -1.5.

The state of the Falcons coming into this game has something to do with that — Steven Jackson, Sean Weatherspoon, and Kroy Biermann are all out, and the latter two will be for most of the season — but right now, the ideal vision for the 2013 Dolphins has been the reality. Miami’s defense is built around its front four, and so far this season, no team has gotten after the quarterback as well as the Dolphins (according to ESPN Stats & Information, Miami has sacked or pressured the quarterback on a league-leading 38 percent of dropbacks). It was Cameron Wake, arguably the league’s best pass-rusher, in Week 1, but when Wake was quiet against the Colts, Randy Starks took up the cause. Wake isn’t likely to be a no-show two weeks in a row, and he’ll get second-year right tackle and first-year starter Lamar Holmes on Sunday.

On the other side of the ball, Tannehill has looked better, especially when having to navigate a lot of players in coverage. Tannehill completed just 58.2 percent of his passes last year when the defense brought four or fewer rushers. This season, that’s jumped to 71.4 percent, according to ESPN Stats & Information. It’s not a matter of dinking and dunking, either. Tannehill’s yards per attempt in those situations is 3.4 yards better this year. Where the Dolphins have struggled is in pass protection, with second-year tackle Jonathan Martin moving to the left side to replace the departed Jake Long. Miami has the second-worst adjusted sack rate in the league, according to Football Outsiders. Only the Jaguars have been worse. The good news for the Dolphins is that Atlanta has faltered most on defense with its pass rush; Miami’s most glaring vulnerability on offense is one the Falcons aren’t equipped to exploit.

One way the Falcons might be able to help overcome their new injuries is by eliminating some older ones. Roddy White has played in both of Atlanta’s first two games, but he’s done so almost entirely as a decoy. The disparity in talent between the Dolphins’ two corners is vast (Brent Grimes has been very good in his first season as a Dolphin; Dimitri Patterson has a history of being benched), and having both of their star receivers healthy would provide Atlanta with an edge in a game where it doesn’t seem to have many.

Wins over the Browns and a likely-to-regress Colts team aren’t enough to give much credence to Miami’s future as a playoff team or as a contender to the Patriots in the AFC East, but if the Dolphins can beat the Falcons at home — and especially if they can do it convincingly — those chances improve dramatically. Since the NFL expanded to a 12-team playoff, 75 percent of 3-0 teams have made the playoffs. The 2012 Cardinals were one of those 3-0 teams that failed to make the playoffs, but the Dolphins — if Tannehill can continue to improve — don’t seem like they will share the same fate.

Cincinnati’s underrated left tackle missed the season opener against the Bears, but he was back last week against the Steelers and played well against Pittsburgh. He’ll have a lot to deal with this week in Matthews, who’s had a relatively quiet first two games: one sack, one quarterback hit, and only three hurries. Part of that may be Green Bay’s opponents (San Francisco and Washington) and the increased attention paid to the read-option that burned them in last year’s playoffs. We’ll see if Matthews is more aggressive at getting after the quarterback against the Bengals’ traditional offense.

CB-WR Matchup of the Week

The real choice here would’ve been the Brandon Flowers–DeSean Jackson matchup from last night, which, aside from one big play, was won handily by Flowers. The runner-up is Grimes going against his former teammate. Grimes has been excellent in his first season back from a torn Achilles, and Jones has been among the best wide receivers in the league while White has been hobbled.

The Steelers’ first-round pick played 60 of a possible 84 snaps last week after seeing the field on less than half of Pittsburgh’s plays in Week 1, notching five tackles and one quarterback hit. This week, he’ll get Bears left tackle Jermon Bushrod, who had some trouble against Jared Allen after playing well against the Bengals in Chicago’s opener.

When the Saints elected to hire Rob Ryan this offseason and transition to a 3-4 defense, most of the response was about the lack of options New Orleans had at outside linebacker for its new scheme. What went overlooked is how much the change would help 2011 first-round pick Cameron Jordan. The 290-pound Jordan was a man without a position in the Saints’ old 4-3 — too small to play defensive tackle and too slow off the edge to be an effective pass-rusher at defensive end. In the 3-4, Jordan is able to split the difference, and the results have come quickly. Jordan got his first sack of the season last week after bothering Matt Ryan for most of New Orleans’s opener. Against the very average Cardinals’ offense, Jordan could continue his move toward being the next defensive star from the 2011 class.