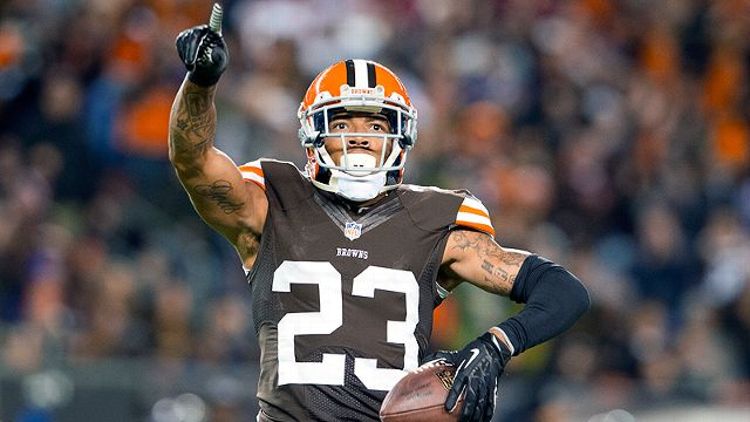 In the NBA, 3-point shooting has become a pivotal ingredient for any team. Part of that is the actual value of made 3-point shots (they’re worth one more point, ya know), but another part is what the threat of a shooter does to the rest of a team’s offense. When teams have to respect and acknowledge a player standing outside the arc, the rest of the players on the floor are allotted opportunities they might not get otherwise. That’s why, in some respects, a reputation as a shooter is as important as actually being one. Before he became the punching bag for efficiency analytics, this was a distinction Rudy Gay enjoyed, and was one of the only legitimate arguments for his status as a quality NBA player.

I don’t want to say Joe Haden is Rudy Gay — he’s much better, relatively — but I do think that part of Haden’s impact comes from a reputation as one of the best cornerbacks in the league. Last season, the Browns ranked 16th in DVOA against no. 1 receivers, but this year, as Haden’s status among the league’s elite seems to be at an all-time high, only three teams are seeing fewer passes to no. 1 wideouts than the Browns, according to Football Outsiders. That goes a long way in the league-leading 44.4 yards per game Cleveland has given up to no. 1 receivers this season. In his career, Haden has consistently been beaten more often than players like Darrelle Revis in his prime or Richard Sherman a year ago, but he still demands the same sort of respect. And that does matter.

This week, Haden and the Browns face an interesting predicament. During the first half of this season, there likely would have been no confusion about which Bears receiver would draw Haden’s attention. Brandon Marshall led the league in targets a season ago, and even as Alshon Jeffery began to emerge, it was clear that Marshall was still Chicago’s no. 1 option. These days, that distinction is murkier. With Josh McCown at quarterback, Jeffery led the team in targets.

It’s likely that Marshall draws Haden on Sunday because of the return of Jay Cutler. It’s no secret that Cutler loves Marshall, and the numbers clearly show it, too. Cutler’s completion percentage to Marshall this season is more than 10 points higher than McCown’s (69.6 to 59), and Cutler has doubled McCown in touchdown throws to Marshall (six to three, according to ESPN Stats & Information). When it comes to Jeffery, those numbers flip: 66.1 percent rate for McCown compared to 54.5 for Cutler, and four touchdowns with McCown to Cutler’s two.

If Haden does end up on Marshall, it could mean another huge day for Jeffery, even with Cutler under center. Cleveland is third in DVOA against opposing wide receivers, but 20th against no. 2 options. Cutler may be a bit rusty, but it could be another big day for the Bears’ passing game.

Somehow, this game still has serious playoff implications, and without Aaron Rodgers on the field, the best player to watch on Green Bay’s offense may be its left guard. Sitton has consistently been one of the best guards in football, and he’s continued that trend even after moving to the left side this year. The Packers lost their left tackle before the season even began, but it doesn’t seem to have affected Sitton’s play one bit. There’s an argument to be made that he’s the best pass-blocking guard in football, and Sunday he’ll be squaring off with one of the game’s best interior pass-rushers.

Dallas’s defense is coming off the low point in what’s been a season of them. The Cowboys gave up 50 to Peyton Manning, but I’d say that giving up 42 to 34-year-old Josh McCown is probably worse. One of the few bright spots on the Cowboys’ defense all season has been Jason Hatcher, who’s having one of the more improbable years of anyone in the NFL. Hatcher is a familiar name for people who follow the Cowboys or the NFC East. He’s been in Dallas since 2006 (when he was picked in the third round) and has been a contributor along the defensive line every year since, but before this season, Hatcher’s career high in sacks was only 4.5. This year, he’s already doubled that through 13 games.

At every stop, Rod Marinelli seems to emerge with a success story, whether it was Simeon Rice in Tampa Bay or Henry Melton in Chicago, where Marinelli helped turn Melton from a fourth-round project into one of the best interior pass-rushers in football. This time around, it looks like Hatcher has enjoyed the benefit of learning from one of the best defensive line coaches ever. Moving to a defensive tackle in a 4-3 has been a perfect change for Hatcher, who’s excelled as a one-gap penetrator since the start of the season. Career years are rare at 31, but this year, Hatcher is right up there with Ndamukong Suh and Jurrell Casey when it comes to creating pressure as a 4-3 defensive tackle.

The Giants’ first-round pick has played every offensive snap for New York this season, but early on things looked pretty bleak. Pugh was absolutely manhandled in the Giants’ blowout loss to Carolina in Week 3, when Greg Hardy probably added another zero to the new contract he’ll get this offseason. But since then, Pugh has been maybe the best rookie tackle from a class that saw three of them go in the first round. For the most part, Pugh has been solid as a pass blocker since that debacle against Hardy, but with the return of Andre Brown and the Giants’ running game, he’s been able to show off some ability in that area as well.

This week will be one of Pugh’s more significant tests of the year, with the Seahawks and their never-ending rotation of edge rushers coming to town. Pugh should have his hands full with the Michael Bennett–Cliff Avril combo on the left side for Seattle, and Red Bryant is a load to move on run downs. Either way, the Giants have to be happy with what they’ve gotten from Pugh in the second half of this season. New York’s recent drafting history is pretty suspect, and finding a player who can reliably start from day one at a difficult position for rookies is a win.

Ryan Tannehill, QB, Dolphins
One player we’ll be going out of our way to watch for at least 10 plays.

For anyone who was wondering just how bleak the Week 15 slate of games is, consider this — Dolphins-Patriots is probably the game of the week. Lions-Ravens is the only other game between teams with winning records and has similar playoff implications, but at this point, I think we know a lot about both of them. The game in Miami should be a way to figure out a few different things. The first is what the Patriots will look like on offense without Rob Gronkowski (again), and the second is what chance this Dolphins team might have if it manages to snag that sixth playoff spot in the AFC.

The best part of Miami’s roster is the front seven, with Cameron Wake, a career year from Olivier Vernon, Randy Starks, and Paul Soliai, but overall, the defense isn’t good enough to overcome a terrible playoff afternoon from the offense. That’s why I’m curious to see what Ryan Tannehill looks like as we move down the stretch. Tannehill has had a rough year by just about any metric — advanced or otherwise — but none of those numbers explain how promising his second season has been.

The Dolphins’ offensive line was bad before it lost two starters halfway through the season. Miami has the fourth-worst adjusted sack rate in the league, and the Dolphins haven’t been much better running the ball. Tannehill doesn’t have much help right now, and he’s still managed to look like a viable NFL quarterback through it all. He’ll need to play the best football of his career if Miami has any shot to get to and win on wild-card weekend, and that probably has to start on Sunday against New England.

Best of Grantland Sports Podcast: The Lakers, the First-Annual Holiday Pantomime, and Steelers-Bengals