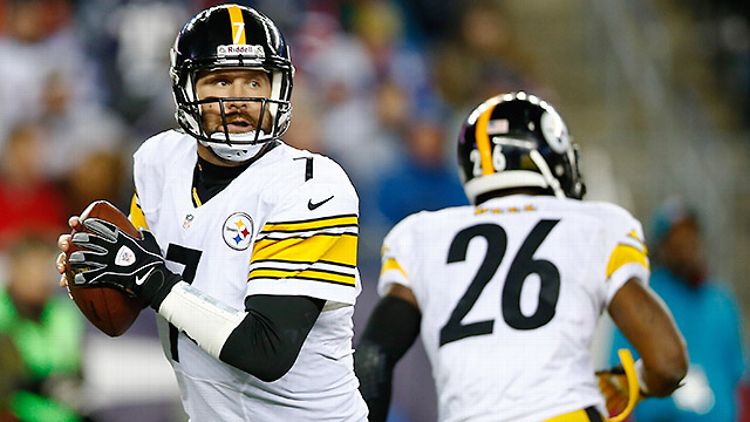 Welcome to Week 12, where Brady-Manning XIV is far from the only riveting QB showdown on the docket. We’ve also got Tolzien-Ponder, McGloin-Fitzpatrick, and Henne-Keenum, which we’ll be breaking down in great detail a little bit later, because I know that’s the hard-hitting analysis you crave. In addition, we’ll talk about recipes, the oldest 8-year-old in the NFL, and a disturbing waiver wire trend that must be brought to light. All that and more in today’s fantasy preview, brought to you by Bobby Rainey, Destroyer of Worlds.

1. QB Ben Roethlisberger, Pittsburgh Steelers: If we forget about Rainey for a minute (impossible, I know!) and restrict our purview to mere mortals, we’ll find that Roethlisberger led the NFL in fantasy points last week. That might seem shocking, seeing as (a) he’s “protected” by a super porous offensive line, (b) Jerricho Cotchery is the key to the Steelers’ red-zone attack, and (c) Megatron was also in peak form this past Sunday, but I swear on Brett Keisel’s beard that it’s true. Furthermore, I don’t think it was an anomaly. Following a dreadful 0-4 September, which included a Todd Haley–Antonio Brown steel cage match, a retrospectively ludicrous loss to the Vikings, and ensuing trade rumors involving Big Ben, the Steelers have regrouped to go 4-2, bolstering their overall fantasy value in the process.

Maybe it’s just a ploy to up his trade value, but Roethlisberger has passed for nine touchdowns in his past three games, topping 350 yards in two of them. He’s tough enough to bring down to cause problems for the Browns’ fearsome pass rush, and he’ll pick apart the non–Joe Haden aspects of their secondary with ease, as he always does. Oh, and he doesn’t have any flying Zoltans to worry about anymore.

2. RB Zac Stacy, St. Louis Rams: Yesterday I was scouring the web for scrumptious Thanksgiving recipes, and I came across something called the “FANTASY STUD,” which struck me as an intriguing, if unconventional, holiday dish. There were a number of flavors to choose from, and I went with the “running back” option. It called for:

In its finished form, this is what FANTASY STUD looked like. I’m no Guy Fieri, but it really hit the spot!

3. TE Delanie Walker, Tennessee Titans: Delanie Walker caught all 10 of his targets against the Colts, basically the football equivalent of a perfect game. He also withstood a helmet-butt from a 250-pound man. You tell me which is more impressive.

I’m going to say surviving the helmet-butt was more impressive, because ample targets have been the norm for Walker lately. This phenomenon traces back to Ryan Fitzpatrick, with whom Walker averages 7.25 targets per game; with Jake Locker under center, that number falls to 4.2. Fitzpatrick’s predilection for tight ends is well documented — the dude made Scott Chandler a legit commodity last season — and Walker has proven to be the Titans’ most dependable receiver outside of maybe Kendall Wright. Against a Raiders defense that just made Garrett Graham look like Jimmy Graham, Walker’s production will continue to spike. (And just in case you need another reason to start Walker, his bathroom selfie game is on point. That has to count for something, especially in a week when “selfie” was named word of the year.)

1. QB Cam Newton, Carolina Panthers: This is where the Cam Newton show ends. Well, not where it ends, but where it pauses for a weeklong intermission. The Dolphins have allowed 11 passing touchdowns this season, fourth-fewest in the NFL, yet are among the league leaders in rushing touchdowns allowed. As such, expect this game to play out much like Panthers-49ers: heavy on Double Trouble, low on Superman.

(Quick but important side note: Words cannot express how strongly I recommend clicking on the Double Trouble link. Did you know DeAngelo Williams and Jonathan Stewart once charged fans — dubbed “troublemakers” — $34.28 a year to access their exclusive website? Sounds like a pretty good deal, actually — the site boasted a blog, gear, and “Panthers Pics,” which may or may not have been a bunch of shots of Jimmy Clausen in various suggestive poses. It’s a shame they don’t update it anymore. I’ll give you some time to take all of this in.)

Anyway, back to Panthers-Dolphins, which feels like a classic trap game for Carolina. The Panthers are on a short week, coming off of two humongous wins, and will undoubtedly spend Saturday night partying at Club LIV into the wee hours of the morning, because that’s what everyone who’s in Miami for the weekend does. Unfortunately, benching Cam probably isn’t a realistic option for you, so hope for the best and maybe just avoid your TV from 1 to 4 p.m. on Sunday. Cameron Wake will already be ruining Newton’s afternoon; there’s no need to let him ruin yours, too.

2. RB Le’Veon Bell, Pittsburgh Steelers: With a yards-per-carry average of 3.1, Bell has a fantasy value that’s almost entirely contingent on touchdowns. His consistently substantial workload makes him a solid bet to score on most weeks, but not against the Browns, who’ve surrendered just one rushing touchdown since Week 6. Cleveland’s front seven is decidedly more formidable than its secondary, so as we posited in the Roethlisberger blurb, Pittsburgh should implement a pass-heavy attack this week. Anticipate a flexy performance from Bell, in contrast to the RB2-caliber ones he’s posted in recent weeks.

Joe Flacco: It's annoying to have so many interceptions http://t.co/XQeMfjCMe2

I mean, yeah, it must be pretty annoying to have an even 13-to-13 touchdown-to-interception ratio when your salary suggests you should be performing like Aaron Rodgers and Drew Brees. Five of Flacco’s picks have come in Baltimore’s past three games, and Smith’s numbers have suffered accordingly. While Smith has managed to find the end zone in back-to-back weeks, his yardage is way down, rendering him too touchdown-dependent for my liking. The Jets really are the gridiron manifestation of Jekyll and Hyde, and based on their current pattern, they’re poised to utterly destroy the Ravens on Sunday, relegating Smith to low-end WR2 status.

Fantasy Bonanza of the Week: Jaguars at Texans

While everyone else is going mental over Brady-Manning XIV, I remain flummoxed as to why Henne-Keenum wasn’t flexed into prime time. Have NBC’s executives forgotten what Chad Henne did in his last trip to Houston?!?

I’m not saying that Henne is definitely going to replicate that performance, but I am saying the Texans’ reeling pass defense presents one of the best opportunities of the season for him to do so, making him a not-completely-terrible fill-in if you’ve got Russell Wilson or Nick Foles on a bye. Despite Justin Blackmon’s suspension, Jacksonville’s receiving corps is not merely the Cecil Shorts Show, as Drew Noble and Ace Sanders combined for 123 yards last week. Meanwhile, Maurice Jones-Drew totally sucks, but if he rushed for a touchdown against Arizona’s stout run defense, there’s no reason to think he can’t get into the end zone in Houston, which would make him a solid RB2 play. Considering the dire circumstances, the Jaguars are performing admirably right now.

But let’s get to the good stuff. Case Keenum is quarterbacking for his life this week, so if you don’t think he’ll come out guns blazing against the Jags’ godawful defense, well, I’d say you don’t know the first thing about Case Keenum. I mean, did you even watch Texans-Raiders?

NOTE: Please ignore everything else that happened in this game.

Garrett Graham’s going to be a free agent after this season, and he has two weeks to earn himself a nice fat contract. Same goes for Ben Tate, whose workload will be ginormous here. And although Andre Johnson is safely under contract, his numbers have been historically stellar (1) with Keenum, and (2) against the Jaguars, making his prospects tantalizing for Sunday. Finally, no, your eyes are not deceiving you: Randy Bullock really did score 13 fantasy points last week, and I’ll be damned if 11/17 doesn’t become a government holiday in Houston because of it.

As Chris Ryan would say, Wes Welker hangs out with pagan hellbeasts in his spare time, no big deal. He also used to spend a lot of time with Bill Belichick, which is pretty much the same thing, because only a hellbeast would let $1 million stand in the way of extending the team’s Pro Bowl slot ace’s contract, receiving corps be damned.

Everyone’s hyping the Brady-Manning aspect of Patriots-Broncos, and with good reason, but we’ve seen that rodeo before. I’m far more intrigued by Welker’s return to New England, because you know Welker’s the type of dude who’s begging Manning for targets simply to avenge his casual dismissal. Welker suffered a concussion in Week 11, but I can’t imagine that his recovery will keep him out Sunday, especially against a Patriots pass defense that struggles much more with complementary receivers than with WR1s. And you’re sort of insane if you think Welker’s going to sit. Take it from Tom Brady.

• RB Roy Helu, Washington Redskins (owned in 39.5 percent of ESPN.com leagues): Helu exploded for 22 fantasy points against the Bears in Week 7; since then, he has averaged 2.5 points (and three carries) per game. Of course, such variance should be expected with Mike Shanahan’s running backs, who tend to produce when you least expect it. But Helu has only eclipsed six carries twice this season, making the chances of an out-of-the-blue monster performance pretty slim, and he hasn’t caught enough passes to be viable in PPR formats. Verdict: Cut him, unless you solely own him as a handcuff to Alfred Morris.

• RB Brian Leonard, Tampa Bay Bucs (3.4 percent): After accruing 20 carries in Mike James’s absence, Leonard was one of Week 10’s most added players, which made perfect sense at the time. The Bucs’ commitment to the running game seemed steadfast no matter who was lining up in their backfield, and Leonard was the next man up. But then Bobby Rainey happened, and when Bobby Rainey happens, nothing is ever the same. Verdict: Cut him, unless you’re in a PPR league and are absolutely desperate at flex.

• TE Aaron Hernandez, FA (.8 percent): Commenter Eric Hogue mentioned something interesting in Tuesday’s comments: Aaron Hernandez has been a more popular add in the past week than Dennis Pitta, who might be returning soon. Upon further investigation, I discovered that 0.3 percent of ESPN.com owners have Hernandez in their Week 12 starting lineups, a small but flabbergasting number. Unlike Pitta, there’s obviously zero chance that Hernandez returns to action this season, so unless he’s playing in Oakland under the code name “Mychal Rivera,” this is a rather puzzling trend. Verdict: CUT HIM.

Perhaps you drank too much RG3 or Colin Kaepernick Kool-Aid and now find yourself well out of playoff contention. Perhaps you drafted Matt Ryan high and now have the whole world praying for your mental health. Perhaps Aaron Rodgers broke your team’s hopes and dreams along with his collarbone. In any event, you sound like just the person who’d be interested in our Challenge of the Week, which is designed to keep cellar-dwelling owners engaged with their fantasy teams.

This week’s challenge is to start Raiders wunderkind/Penn State legend Matt McGloin at quarterback against the Titans’ ruthless pass defense. Like Hernandez, McGloin is owned in 0.8 percent of ESPN.com leagues, which is pretty fucking eerie.

As always, Grantland is not liable for any damages you may incur as a result of starting McGloin, including, but not limited to emotional devastation, loss of eyesight, crippling regret, a triple-digit loss, etc. Enjoy!