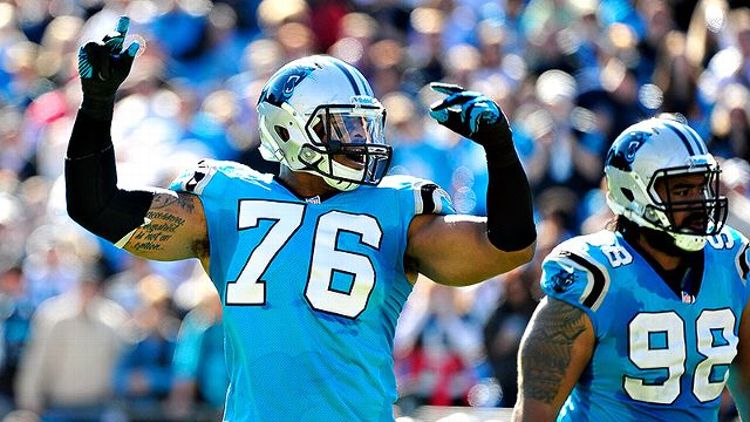 Raise your hand if before the season you’d penciled in Panthers-49ers as the best, most significant game of Week 10. Now, everyone with his or her hand raised, take a long look in the mirror and ask what about your childhood was so terrible that you turned into a compulsive liar.

Really, though, this is where we are. This is real life, and the Panthers are traveling to San Francisco in early November for a game with massive playoff implications that should provide a real measure for where each team stands entering the stretch run.

It wasn’t too long ago that the 49ers were the team pulling off the surprising turnaround, a feat made possible in no small part by the way San Francisco assembled its roster. Between 2007 and 2011, the 49ers spent three first-round picks on offensive linemen, and when Jim Harbaugh showed up and San Francisco won 13 games in his first season, it was behind a power running game that started up front.

In some ways, Carolina’s turnaround has been the result of a similar plan, but on defense. The Panthers have only spent one first-round pick on their defensive line in the past few seasons, but the investments made and players developed at those four spots have defined Carolina’s newfound defensive identity. Charles Johnson got a massive $72 million contract after racking up 11.5 sacks in the first season after Julius Peppers left for Chicago, and although that’s a tough figure to live up to, he’s been a very good player for several seasons. On the other side, Greg Hardy is still looking for his payday after coming to Carolina as a sixth-round pick in 2010. Again on pace for double-digit sacks, he should have no trouble getting it.

The pass rush was already in place at the end of last season, but the Panthers decided to spend their first two picks in April’s draft on the rest of their defensive line, taking Star Lotulelei in the first round and Kawann Short in the second. An area that was already a strength turned into maybe the best front four in the league, and combined with Luke Kuechly, one of the better front sevens, too. Carolina is third in defensive DVOA and fifth against the run.

In the early part of the season, the 49ers’ offensive line didn’t look quite as dominant as it had in 2012, but after rushing for 219 yards in Week 4, it looks like San Francisco has embraced a return to its run-first ways. The 49ers have rushed for at least 149 yards in every game since, and that mark came against the Cardinals, who are currently second in run-defense DVOA.

There are plenty of individual battles that should be great to watch here, including Hardy squaring off against Joe Staley, who has probably been the best left tackle in the league over the past two seasons. But the matchup I’m looking forward to is Lotulelei, who’s been one of the better run defenders in football, taking on Mike Iupati and Alex Boone, two of the best run-blocking guards around. In general, this is a case of one team’s strength going right up against another’s, and whichever group wins out will probably decide who eventually wins.

If you were ranking the best draft picks made in April, based on the production and where a player was drafted, Warford and fellow third-round pick Keenan Allen would probably be at the top. It took a host of injuries to San Diego’s starting wide receivers for Allen to take over as Philip Rivers’s no. 1 target, but Warford was a starter from day one. Taken with the 65th overall pick out of Kentucky, Warford started all eight games for Detroit at right guard, and he has played better than anyone really could have hoped. He has been one of the better players at his position in the entire league through half the season.

The middle of the Bears’ defense is filled with second-string players after injuries to Henry Melton, D.J. Williams, and Nate Collins, and Warford should have no trouble taking advantage of guys like Landon Cohen and Corey Wootton on Sunday.

Ryan Kalil, C, Panthers
One player we’ll be going out of our way to watch for at least 10 plays.

The Panthers’ defensive line may be the strength of the team’s roster, but Carolina’s offensive line is quietly having a very good year opening holes for its running backs and providing time for Cam Newton. Jordan Gross has steadily been one of the better pass protectors in football for about a decade, but two seasons ago, the consensus best player on Carolina’s line would have been Kalil. He was voted second-team All-Pro in 2011 and went to his third straight Pro Bowl that same season, but last year, a Lisfranc injury cost him the final 11 games of the season.

Kalil has been healthy and playing well since the start of the season, and I’ll be interested to see how he does on Sunday with getting to Patrick Willis and NaVorro Bowman on the second level of the 49ers’ defense. For much of his career, Kalil has been a center who’s able to both move well in space and handle bigger bodies on the line of scrimmage, and both will be paramount on Sunday. Carolina wants to run the ball, and it helps to have Kalil in the middle of the offense.

The improvement of Carolina’s defense has been central to its ascension into the playoff picture, but getting back one of the best centers in football after a year away certainly doesn’t hurt. I’m curious to see how close Kalil is to the Pro Bowl form he had back in 2011.

Best of Grantland Sports Podcast: The Pacers and the Bulls, Billy Beane on Soccer, and Bears-Lions