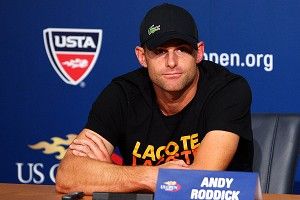 Andy Roddick announced last night that he will be hanging up his spurs whenever he completes his run at the U.S. Open. The 30-year-old, once America’s great tennis hope, leaves the game with a U.S. Open trophy (2003), four other Grand Slam final appearances (including a legendary clash with his fremesis, Roger Federer, at Wimbledon in 2009), $20 million in prize money, and Brooklyn Decker on his arm. He also leaves behind an incredible collection of press conference appearances. Because even when Andy Roddick lost on the court, he won in the media room. For those about to quip, we salute you:

This one, on love, courtesy of Rembert Browne (who I think double-majored in Love and Andy Roddick (or is that one major — Love & Andy Roddick?), might be the all-time classic: