We Went There: USMNT Beats Mexico in Columbus, Qualifies for World Cup 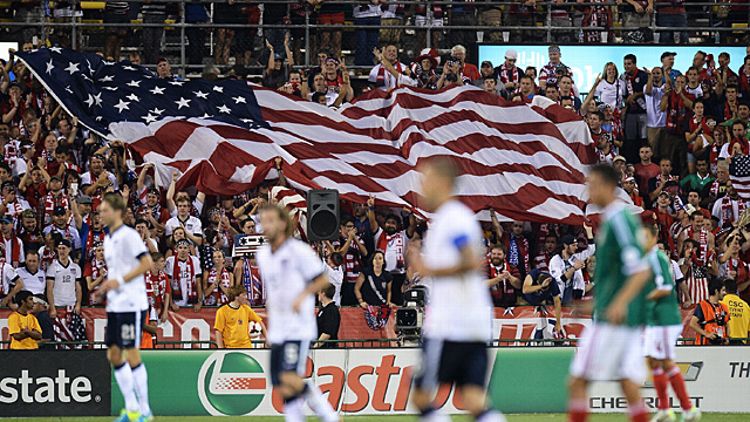 Crew Stadium just north of Columbus, Ohio, is something out of a bygone era in American soccer. When it opened in 1999, no one knew if Major League Soccer would survive. As a result, Corna Kokosing Construction Company built the country’s first pro soccer–specific stadium for just $28.5 million. Fourteen years later, the aging venue with faded yellow backs on its bench seats holds just more than 20,000 people and a healthy amount of American soccer’s limited history.

In February 2001, USMNT head coach Bruce Arena chose Crew Stadium as the site of the United States’s World Cup qualifying match against Mexico. It was 29 degrees at kickoff and the Stars and Stripes prevailed 2-0. Four years later, the same scoreline got the Americans into the 2006 World Cup. In 2009, Michael Bradley scored twice, and the “dos a cero” chants rained down from the pro-American crowd.

Which brings us to 2013. Two teams going the wrong way took the field on Tuesday evening. The U.S. lost in Costa Rica on Friday and found itself without Bradley and at least two other starters. But it could still qualify for Brazil with a victory and a Honduras win or tie against Panama in San Pedro Sula.

Mexico was in shambles, just 1-5-1 through the first seven games of the Hexagonal. Coach Chepo de la Torre didn’t survive the latest debacle, a 2-1 defeat to Honduras in Azteca. Luis Fernando Tena, one of his assistants, took over as interim coach. He was already a dead man walking. Mexican journalists were calling him a bombero, a firefighter who would come in, put out the fires, and then leave just as quickly. They didn’t expect him to last more than a game or two.

To its credit, Mexico, just 2-7-3 in competitive matches in 2013, planned to go down swinging. Right before the match, Andres Guardado said, “We’re better than them. That’s for sure,” which seems like a dumb thing to offer in an already tense rivalry. Tena smartly abandoned his predecessor’s conservative formula, inserting Guardado for Angel Reyna, Chicharito for Oribe Peralta, Jesus Zavala for suspended Gerardo Torrado, and Hiram Mier for Severo Meza. That is a lot of names. The point is: El Tri came to attack.

Despite the sellout, capacity-boosted, pro-American crowd of more than 24,000, the U.S. started the match on the defensive, as its opponent pushed the pace. On occasion when Mexico turned the ball over, Chicharito and Giovani dos Santos pressed the makeshift back line that featured Clarence Goodson in the middle and Fabian Johnson on the right. Were it not for the heroics of Tim Howard, El Tri would have gotten a goal. Instead, the Everton keeper made two or three world-class saves and the teams went into the half tied 0-0. Mexico hadn’t found the back of the net in its last 298 minutes against the U.S. or in six and a quarter hours at Crew Stadium.

Right after the break, Eddie Johnson landed a knockout blow. In the 49th minute, the Seattle Sounders forward outleapt Diego Reyes and met Landon Donovan’s corner with his head. U.S. 1-0. Pandemonium inside Crew Stadium. It was remarkably Donovan’s 57th assist, which is more than the next three players on the list combined. Also remarkable: The Los Angeles Galaxy star somehow managed to contract a nasty case of pinkeye in Costa Rica, which is only the second strangest ailment he’s had during a recent U.S.-Mexico qualifier. (He played the 2009 game in Mexico City with swine flu.)

Any life El Tri had was gone. “They looked relatively timid and shy throughout. I’ve never seen a Mexico team look that way,” Donovan said after the match.

His teammate, Omar Gonzalez, playing in his first Columbus Derby, agreed: “Mexico didn’t have much in the second half.”

Those are nice ways of saying the opposition very nearly rolled over and died.

Donovan, playing in what is likely his last qualifier against Mexico, put the dos in dos a cero in the 78th minute. Mix Diskerud, who had replaced an exhausted Eddie Johnson two minutes before, elegantly chipped the ball up to himself, drove toward the touchline, and slid a low cross into the six-yard box. Clint Dempsey didn’t get enough with his sliding attempt to direct it into the net, but it didn’t matter; Donovan was there to tap it home.

That tally was both a nice nod to the past and a glimpse into the future. The two biggest American stars of the last decade earned the goal and the assist. But Diskerud’s creativity and vision — the traits U.S. Soccer will continue to develop in the future — made it happen. The old stadium rocked with chants of “We are going to Brazil.”

One final obstacle stood in the way of a fourth straight 2-0 win over Mexico in Columbus. Dempsey drew, and then stepped up to take, a penalty kick near the end of added time. Mexican goalkeeper Jesus Corona guessed wrong, but the forward’s form wasn’t perfect and his attempt flew to the right of the post and into the crowd.

“I just tried to put it into the corner and hit it hard, but my accuracy was off,” Dempsey said.

Alejandro Bedoya explained the poor shot a bit better: “This place has a lot of ghosts. Dos a cero, you know? Clint missed that penalty, that ghost. I don’t know. It’s funny how it all worked out.”

Immediately following Dempsey’s failure, Jamaican referee Courtney Campbell blew his whistle. The Americans celebrated briefly, walking an entire lap around the stadium while applauding the fans. Then, they returned to their locker room to watch the conclusion of the Honduras-Panama match. While the visitors scored a late equalizer — “We were a little bit shaking when Panama made the goal,” Jermaine Jones said while carrying two American flags, a Budweiser, a Bud Light, and a Louis Vuitton travel bag — the draw was enough for the U.S. to clinch one of 32 spots in Brazil next summer.

The U.S. sprayed champagne, then went back out onto the field where a few hundred American supporters had stayed to watch the other game on the big screen. The team started dancing in a circle. The squad and the stadium looked different, but it all felt very familiar.