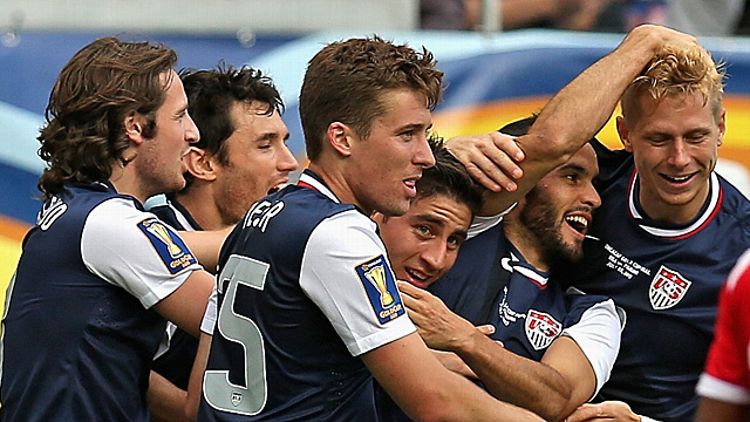 There seems to be a bit of mythmaking or revisionism claiming that before the hiring of Jurgen Klinsmann, the U.S.’s soccer identity was that of a counterattacking team. That the Americans were often outmanned, but they had a bit of speed so they’d let the opposition into their half, then hope to hit them on the break.

The country’s most famous goal (1950 aside) was scored on the counter but, in reality, the USMNT would have been just as happy to have possession. In the last World Cup, the U.S. played four matches. In three of them they both outshot and had more possession than their opponent (England being the exception). Those aren’t the stats of a side trying to sucker you into a counterpunch.

To put it better, as a country that hasn’t produced a truly lethal striker, it’s never been able to depend on moments of individual skill, so it’s often found itself needing to take advantage of situations where it has a defense caught out.

Sure, the U.S. has a reputation for being fit and tenacious and not being outworked, but being the David Eckstein of international soccer isn’t a style. And an identifiable style is something they’ve never had until somewhere in the run of 10 unbeaten matches leading up to the Gold Cup final. It’s hard to pinpoint exactly when, but around the 2-1 win at Jamaica the U.S. started to look like a thing. They were anticipating better; they were playing more incisive balls in the attacking third; they were keeping a high defensive line and dictating the pace of the game. They were playing good, attacking football. And they were doing it for long stretches in consecutive games. Even weirder, it looked like they had planned to do it.

There were even sequences in the Gold Cup — the semifinal against Honduras comes to mind — where Klinsmann’s team strung together multiple one-touch passes. It never does that. But could the U.S. do it in a big match and could they do it against better opposition?

The answer to that after Sunday’s final at Soldier Field: “Not really.”

First, “big” and “better” need qualification. Those are both relative. It’s big because it’s the final of a regional tournament, but don’t confuse the Gold Cup with the Euro. And Panama was better in that (a) they fully deserved their spot in the final after beating Mexico twice, and (b) they sent close to a first-choice squad.

Maybe it was nerves, maybe it was playing against an opponent that didn’t send a B-team, maybe it was that Klinsmann had been banished from the sideline for having the temerity to express his dissatisfaction with a series of bad no-calls against Honduras. Or maybe it was just because Panama defended really, really well (particularly their center backs). Whatever the reason, in the first 20 to 25 minutes of the first half, the U.S. was a mess. The most effective and most frequent move by the Americans was the 30-yard back pass to goalkeeper Nick Rimando.

In the 22nd minute I wrote in my notes, “We’re not scoring today … unless Panama does something phenomenally stupid.”

I’d argue that was closer to being right than wrong. It wasn’t Panama that did something phenomenally stupid but stand-in U.S. manager Andreas Herzog (he was actually co-manager with Martin Vasquez but CONCACAF forced the U.S. to put one name on the team sheet, so Herzog gets credit/blame). He sent Brek Shea on as a 67th minute sub for Joe Corona. Shea was laughably bad in the group match against Cuba, and it was really only funny because of the final 5-1 scoreline. Shea’s turnovers effectively made it a 10 vs. 12 matchup for much of the first half. And up two players — one whom was actively sabotaging the opposition from the inside — Cuba was good value for going into the break level at 1-1.

If anyone had done severe damage to his chances of securing a trip to Brazil next summer (assuming the U.S. qualifies), it was Shea for his performance against Cuba.

If anyone undid the severe damage to his chances of securing a trip to Brazil next summer, it was Shea for his performance against Panama.

Herzog’s decision, which had to have some USMNT followers wincing like Fielding Mellish hearing “appendicitis,” turned out not to be stupid at all. It was game-transforming. Shea’s first touch, off a diagonal ball from near the top right of the 18 that Landon Donovan either whiffed on or let go through, was a tap-in that gave the U.S. a 1-0 lead that would hold up for the Americans first Gold Cup title since 2007.

Shea tried hard to both re-undo and un-redo any damage he might have done or undone. He wasted what should have been an easy one-on-one against keeper Jaime Penedo by failing to solve the problem of his own feet. But moments later Shea teed up Eddie Johnson with a perfectly weighted ball that hit him on the dead run one step inside the 6-yard box. That should have put things to bed. Unfortunately, Johnson picked a poor moment to pay homage to Carlton Cole.

The U.S. still isn’t a good finisher, and it wasn’t just Johnson. Clarence Goodson, Donovan, and Corona all missed very makeable headers. Better opposition will make them pay for that.

There are a lot of takeaways from the Gold Cup. Actually the only important takeaway is that weirdly sharp-edged trophy and, woo-hoo, the U.S. is champion of CONCACAF. But Klinsmann has plenty to think about going forward.

• The question is no longer “Does Donovan get a spot in the squad?” but “How to get Donovan and Clint Dempsey on the pitch at the same time in a way that maximizes what they can each do?” (it’s like the U.S.’s own little Gerrard/Lampard conundrum).

• Is Kyle Beckerman, who was superb on Sunday, bench material or is he worth first-team consideration?

•Will the U.S. ever get a fair shake from regional officials (I believe they got carded twice for, what, getting hit)?

• Can Stuart Holden not get injured?

Klinsmann’s version of this side is still a work in progress, but these are better problems to have. As recently as the turn of the new year, this team looked terrible. After the dreadful 0-0 draw in January against Canada, it was totally valid to suggest maybe Klinsmann wasn’t the answer. The gap between that match and the Gold Cup semifinal is big enough to make any of us who doubted Klinsy feel stupid. And even if the final was a step back — and again, plenty of credit goes to Panama for defending well — it’s good to know that when Plan A fails, the U.S. just being Ecksteinian is not a bad Plan B.

Filed Under: Jurgen Klinsmann, Soccer, USMNT, We Went there