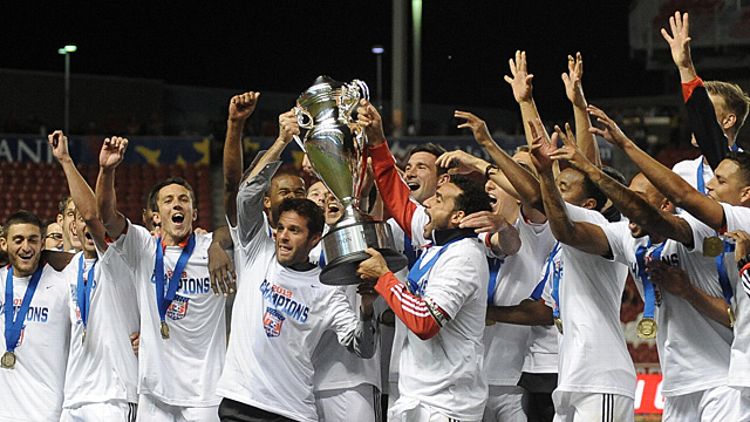 Some months ago, I found myself walking through an empty fairground in deepest Brooklyn, to a U.S. Open Cup first-round game between Brooklyn Italians and Icon FC. I made eye contact with half the crowd, watched a stray ball bounce into a Dumpster (where presumably it still remains), and heard every shout from the benches — mostly because I spent most of the game wandering between them. The key was low. I was in heaven.

After that game, I followed the winner, Icon FC, to their next match, and have continued to follow the winners of each successive game until they lost, then followed the fortunes of the team that beat them. Some of those accounts are up on Grantland already. Some, like the tournament they reflect, have so far been caught up in scheduling woes. But arriving for the final in Sandy, Utah, where Real Salt Lake will take on D.C. United for the Cup, it has occurred to me that I don’t think I’ve ever really explained what drew me to this tournament in the first place, and why you, the American sports fan, should care. So here’s a short version of just why any sports fan with a pulse should follow this tournament.

This is the 100th U.S. Open Cup final. It is the third-oldest continuously run challenge cup competition in world football. Even to those who’d rank U.S. domestic soccer’s newsworthiness as somewhere up there with waterskiing squirrels, that’s the kind of landmark that needs to be acknowledged. This tournament is a survivor. And it’s had a lot to survive.

American soccer leagues have come and gone in the past century — telling their own story of the rise and fall of the manufacturing base and its attendant work teams; the persistent then indistinct clusters of first-, second-, and third-generation immigrant groupings bringing with them their local version of the game; the digital/globalization era and MLS’s attempt to build a sustainable model for a domestic league on the back of the sport’s pervasive global popularity. And all this in the face of a sporting establishment’s studied and, at times, enshrined indifference. Throughout each faltering attempt the Cup has kept going — reflecting those changes, while somehow continuing to be its own imperfect, quirky entity.

That sort of past, particularly one with the qualities of a secret history, tends to draw out the geeks and the romantics to defend it. Sports in America tend to be both profoundly sentimental (in fairness, it’s hardly unique in that respect) and utterly indifferent to sentiment at the business level. The Cup’s venerable status protects it from the logic of sports capitalism that would like to see it as too much bother. Every year MLS sides grumble about compressed schedules or being forced to send their B team across the country to be beaten by a bunch of amateurs while Twitter cackles at them. The format is tinkered with, the winners are given a CONCACAF Champions League berth as incentive, U.S. Soccer steps up to assume more control of it … but the abiding impression is always that the tournament exists despite some of the competitors and administrators.

You Could Win It

Let’s assume you don’t care about history, but have an instinct for what makes for a dramatic tournament, or you’re into March Madness, or like the unseeded player beating a Federer, or etc., etc. The format of the U.S. Open Cup should appeal.

If you’d like to win the 2014 U.S. Open Cup there’s nothing stopping you. You’d need to form and register a team, win some preliminary games or a local league against some other amateurs, land a regional berth in the qualifiers, and make your way to the first round. But you’d have a shot. Once there, you’d be up against the lower tiers of the U.S. Soccer pyramid — the PDL players, USLPro players, and NASL players whose teams arrive in the tournament in the first and second rounds. Navigate those and you’re in the third round.

The third round is in the dictionary under “Schadenfreude.” All 16 U.S. MLS sides enter the tournament at this point, and a fair few exit, too — the lower-league players and amateurs take their one annual chance to address the status quo of a system that has no allowance for promotion/relegation. The round is seeded, so each MLS side must run the same gauntlet of being humbled by a lower division team. It really is the popcorn round — made more fun by the janky interface of unreliable Twitter updates and equally unreliable streams from around the country, showing L.A. Galaxy say, being escorted from the tournament by Carolina RailHawks (that’s happened twice in the last two years — and yes, it was ridiculous that the Galaxy should have had to fly across the country midweek to participate, and yes, they weren’t playing their regulars, and yes, the neutrals secretly loved it).

The streams are a big part of the tournament. Cable channel GolTV is showing the final, but there’s no national coverage for earlier rounds. Some MLS sides provide their own feeds, but aficionados prefer the INTERNCAM™ club feeds, where the camera will often stay static and running at halftime as the operator discusses what they’re eating. Sam Mendes missed a trick in American Beauty. That video of the plastic bag floating around in the wind should have just been the halftime stream from Charleston Battery taking on Harrisburg City Islanders.

OK, so now your team of trusty amateurs has beaten an MLS side in the third round, as say Cal FC did in Portland last year (and yes, they were coached by Eric Wynalda, and did contain a number of players who’d fallen through the MLS cracks, so it wasn’t quite you and your friends from the bar, but they did go to Portland and win in front of one of the more rabid sets of fans in the country). Now you just have to win three more games and you’re in the final. Win that and you’ve won the Cup, and a spot in the following season’s CONCACAF Champions League, playing the best club sides from the region. You negotiate the group stages of that, play through the road and home knockout stages, beating the likes of Santos Laguna and Monterrey, and now you’re Champions League winners. From there a possible FIFA Club World Cup beckons, and your team beats Bayern Munich in the final. You may need to book some time off work.

In a one-off game, anything can happen. And yes, last night’s game was won by D.C. United. That’s winless-on-the-road-for-the-season-and-wooden-spoon-destined D.C. United, who I first saw in this tournament in the third round, and ended up following for the rest of the Cup (secretly believing before most rounds that surely this would be the game where their unlikely run ended).

In some ways they came into the final with nothing to lose; underdogs with little expectation of turning over a RSL team in contention for this year’s Supporters’ Shield, playing in their own house. Yet D.C.’s rough season, hampered by injuries, had come to pivot entirely on this one game. Despite coach Ben Olsen’s protestations to the contrary, it was hard not to feel that certain players were playing for their futures. As the league slipped further and further away, the more Olsen had concentrated on keeping as near to his first-choice side available for the Cup run. Looking at the finally injury-free lineup he put out for the final was a look at what might have been for the season, as John Thorrington lined up alongside his nominal backup at the start of the year, Lewis Neal. Both players had been injured early in the campaign. Both would have crucial roles on the night.

D.C. arrived in Salt Lake with a game plan and executed it. Neal tucked in from the flank and shored up the midfield against RSL’s intricate approach play. Thorrington, his soccer brain as sharp as ever, prompted quick counterattacks, and just before halftime sent in the cross that was knocked loose for Neal to score on the end of a secondary run.

RSL pushed back in the second half and hit the woodwork twice, but this was D.C.’s night. Like Wigan in the F.A. Cup, they had contrasted the most awful of league campaigns with the most unlikely of Cup wins. As United collected their trophy in a rapidly emptying stadium and sprinted over to share it with the handful of fans who’d made it out for the final, I had a memory of that third round in Richmond, of some of the same fans running from one end of the stadium to the other to be at the end where penalties were about to be taken. Now they had streamed down from the upper stands they’d been allocated to occupy in one corner of Rio Tinto Stadium.

Olsen was among them, being hugged, photographed, chanted at. I caught sight of James Riley, who had scored the winning penalty in Richmond and who I’d spoken with in the dark after that game as floodlights shut off around us. He was shaking his head and smiling. It’s been a difficult year for the club, for him, and this was sweet vindication.

Nick DeLeon, the likeable young player whose distinctive mop of curls could be seen making well-timed breaks throughout the night, was grinning like a little kid. We talked about the game a little (“we knew if we set up right they could only beat us by going wide and we were prepared for that”), then given his smile, I mentioned something I’d been meaning to ask since the start of the run, when I’d noticed a distinctive tattoo on his arm — an adapted quote from Mia Hamm about playing for the little kid inside you who loves the game. DeLeon looked confused for a second. “Mia Hamm said that? I didn’t know that.” He paused, then smiled again. “She’s right on point.”

Headed to the D.C. locker room I passed a red-eyed Kyle Beckerman, RSL captain, waiting in his street clothes for the stadium lobby to clear. He grimaced and winked at me quickly — polite but in no mood to speak. I thought back to defeated players I’ve seen along the way: the Brooklyn Italians player Henry Lino, who’d walked with me on the way to the first-round game; Icon’s Danny Szetela, yet to confirm that his stint with the team would land him a route back to the professional game with New York Cosmos; Andrew Dykstra, D.C.’s on-loan keeper at Richmond, hovering between his two sets of erstwhile teammates after the decisive penalty shootout. Others too. The scale is different (even if the Gatorade barrels are ubiquitous), but that sense of soccer people dealing with the moment a trajectory gets halted is the same.

And then the other side of it: I entered the D.C. locker room, where Thorrington was diving headlong onto the beer-soaked plastic lining the room, and Bill Hamid was turning down the booming music so he could speak about winning the trophy as a hometown player. Dwayne De Rosario was talking about winning his first Open Cup while standing in front of the locker room whiteboard. It’s wiped clear of tactics and now reads simply: “Regen: Champagne.”