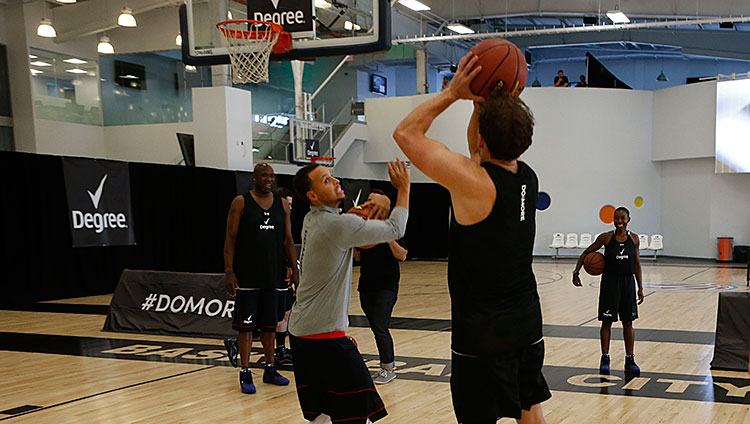 In a massive Manhattan gym, on the other side of a curtain partition from where I’m idly dribbling, Walt “Clyde” Frazier is romping around with several dozen summer campers; their ecstatic squeals ricochet off the rafters. And that’s not even the fun side of the gym. On my side we’re having a 3-point-shooting contest. And though I’m currently in the lead, the next guy up is Stephen Curry.

This is now a part of summer for the second-team All-NBA guard: a shooting competition with four schlubby writers. In the background, a mini-JumboTron (a Tron?) endlessly loops Curry’s Degree deodorant commercial, which was directed by John Legend, who betrayed the influence of early-’00s Ridley Scott with his shots of Curry, wearing a compression tank top and running up a hill, with soft light in the background.

The brand lured me and the three other writers to this mega-gym on the edge of Chinatown with the carrot of getting close enough to smell Mr. Curry, ask him a few questions, and “train” with him.

This sort of thing has become a popular tool for companies that understand that many media outlets are incessantly hungry for content, and that many of them can’t get anything close to this kind of time with someone like Curry in the offseason. Instead of paying for an ad, they offer access. YOU WIN, DEGREE.

Before we could meet up with Curry, we sat through the second lecture about deodorant of my life. The first came in fifth grade. Luckily the good people of Degree did not make me take a note home to my mother to reinforce this message.

Then we got to take the court, where we indeed did train with Curry. Now, doing anything athletic in front of a professional athlete is an intensely self-conscious experience. First off, you know you suck. The pro knows you suck. But you still don’t want to, like, suck suck. The goal is to appear competent enough so that the pro would know you’re not a stiff and maybe he would kick it to you if he were triple-teamed and you had your feet set. But you also don’t want to look like you’re trying too hard, because no matter how hard you try, you will still suck.

Even up close, Curry doesn’t look like much. He’s obnoxiously, evidently fit, but in a way similar to how a guy who rock climbs and plays on the college Ultimate team is fit. Wiry, conditioned for survival. He doesn’t carry himself with a puffed up chest or really any pretension, which is a cool thing for the best shooter in the world to do. He started us with a little pep talk, not unlike what you might get at the beginning of a workout video. We’re going to sweat. We’re going to learn a little. And hey, we’re going to have some fun. (All these things would be true. Especially the sweating.)

The first scare came when I realized Curry was behind me on the speed ladder warm-up, in which we performed a footwork pattern through a ladder on the floor and did a burpee at the end. On the first round through, I didn’t listen to the directions and neglected to switch up my pattern on the second ladder. Curry corrected me, and alerted me to his participation, and to the fact that if I kicked the ladder in my zeal to impress him, he would be the one who had to stop and fix it. Trip up the ladder part, and Curry definitely does not pass it to you, even when he gets triple-teamed and picks up his dribble, and all your other teammates faint.

We moved on to shooting. You want to know why Curry is such a good shooter? Well, he told me. The formula is BEEF, which means Balance, Elbow, Eyes, Follow-through. If you didn’t already know you shouldn’t be jumping sideways with arms akimbo and looking at the stanchion when you shoot, this probably won’t do much for you.

The skill drills are really where you get to lay on the competitive nonchalance that so defines the working-out-in-front-of-a-pro dynamic. You need to show you can handle the ball and you are acquainted with the secrets of BEEF, but take it easy there, Rocket, you’re breaking down cones.

This is the proper way to look good, but making shots requires you to clear your mind, not focus on looking like you are clearing your mind — and, wait, did he just say “Knock down” when you rose up like you were his teammate and best friend? (YES!!)

Finally we made enough shots that he released us from the drill. On another court, racks of balls were arranged in the customary formation for a 3-point shootout. No defense. No running. Minimal jumping. My kind of competition. Which I proved by getting hot at the top of the key and winning by one point.

Curry’s involvement came as a surprise. “There’s one more player entering the competition,” he laughed and then bounced into position behind the first rack. To make it fair, he said, with what approached sincerity, he would shoot with a shorter clock.

Curry banged in all five of the first rack with the kind of effortlessness I had just put so much effort into affecting. My score, a measly 9 out of 25, was in instant jeopardy. I started telling him he was too close, he needed to shoot NBA 3s to make it really fair. He moved back a bit, and I kept barking like it was helping.

Somehow, he missed an entire rack. Then bricked all but one of the next one. He got to the final corner rack needing to make two shots to tie me. He made one. His final attempt started right and never had a chance.

I was in Madison Square Garden the night Curry’s star went supernova. When he started missing in our competition, I assumed he was picking out different parts of the rim to hit. Is it even possible he unintentionally missed 17 out of 20 unguarded 20-footers? Was my victory the result of a carefully engineered experience to increase brand affinity?

These are the wrong questions. No point in trying to play it cool. All that matters is the final score. Mason 9, Curry 8.

Like Mark Jackson and Marco Belinelli before me, I had defeated the greatest 3-point shooter ever.

Beckley Mason (@BeckleyMason) lives in New York City. He has written for ESPN.com, ESPN The Magazine, and the New York Times.