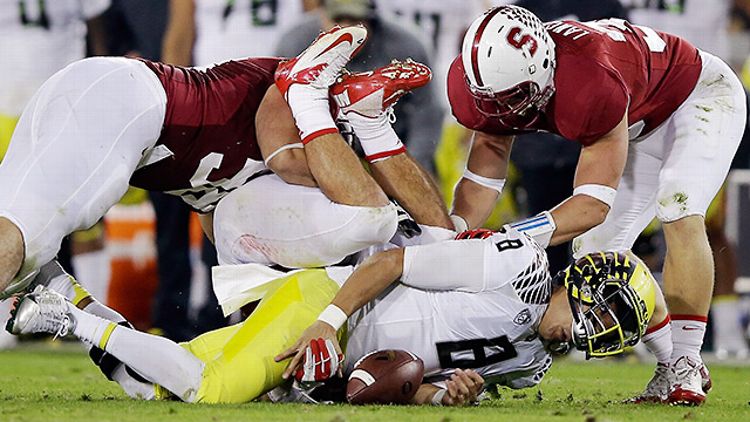 That hypothetical we posed yesterday, about whether it’d be more painful to be knocked out of the running for the national title by an outright loss or by the cruelty of polls and unfeeling computers and the glaring lack of a playoff system? Following a nasty pair of prime-time top-10 weeknight games, two of the FBS’s best programs might be able to compare notes.

He’s right and he’s not. In the absence of a playoff system, the last handful of contending teams can’t control what exactly the pollsters and computers do with them. But it’s still on them to make the best case. Last night Baylor did that, and Oregon did not.

The no. 6 Bears overcame a rusty carnival ride of a first quarter, held spiritually steadfast for that magical five minutes of game clock in which they trailed Oklahoma 5-3, and proceeded to pour on the points behind That Guy! Bryce Petty for a 41-12 victory over the 10th-ranked Sooners. Baylor will get a bump that may be enough to wriggle up to the rarefied rankings air occupied by the likes of Ohio State, Florida State, and Alabama. It’s not that far away. But it may not. One-loss Stanford was ranked ahead of the Bears before Thursday’s contests, and all Baylor can do now is blow out two more ranked teams in its next two games, finish the season in a showy fashion, and wait. It ain’t fair, but fair ain’t in it for anybody.

The Ducks, for their part, are out of the title race* the decisive way. With a starting quarterback obviously operating below the stratospheric max capacity he displayed earlier this year, a defense that was possibly more ill-equipped than we were — and that’s really effing unequipped — to confront a ceaseless Cardinal ground attack led by That Guy! Tyler Gaffney, and a series of ill-timed blown chances, the Ducks flailed against their captors for three quarters and five minutes, scored 20 late points to make things interesting, and ran out of chances just in time to drop another heartbreaker to their Pac-12 North nemeses. The Ducks haven’t lost to any other team the past two seasons, but they couldn’t stop Stanford’s O-line or slow Gaffney, who used his 45 carries to pummel bodies and melt clock. And despite the well-worn proclamation that time of possession doesn’t matter with a team that can score as quickly as Oregon can, the Ducks simply couldn’t hang on to the ball through three-plus quarters of play, as Marcus Mariota struggled against a pass rush that heavily dented the QB’s Heisman hopes along with Oregon’s title chances.

There has to be regret on both sides: If not for Stanford’s deeply upsetting loss to Utah back in Week 7, we could very well be looking at a Cardinal outfit nestling up next to Bama for a smashing Pasadena showdown. But what we really want, after our first trip here, is to see the Cardinal and Tide meet in a home-and-home, someday, some way. To see the kids in the black-rimmed glasses repaired for comedic effect scarfing down barbecue nachos in Tuscaloosa, and houndstooth-clad ladies picking their way through the forested environs of Stanford Stadium. There’s a goofy, endearing dichotomy at work here: the ground-chewing football, the legendarily impudent band, the camera-ready cheerleaders and the Dollies, the quarter break for “God Bless America” and the T-shirted, jeans-clad bros waving the big flags. The Cardinal and Crimson faithful could find a lot to admire about one another’s game-day scenes, we suspect, from expensive SUVs to clouds of meat smoke that hang low over the grounds.

We’ve meandered. To the future: Stanford and Oregon are now tied with one conference loss each in the Pac-12 North, and hold a one-game lead over third-place Oregon State in the division. The Cardinal, obviously, have the tiebreaker advantage via head-to-head record. Stanford’s remaining regular-season schedule: at USC, versus Cal, versus no. 23 Notre Dame. Oregon’s: versus Utah, at Arizona, versus Oregon State. The Ducks are due to drop in all relevant rankings; where Stanford ends up slotted is anybody’s guess.

*Right up until the point when the remaining four AQ undefeateds lose, and everything resets, and the recently dead walk the earth complaining that more of you should’ve believed in Baylor.