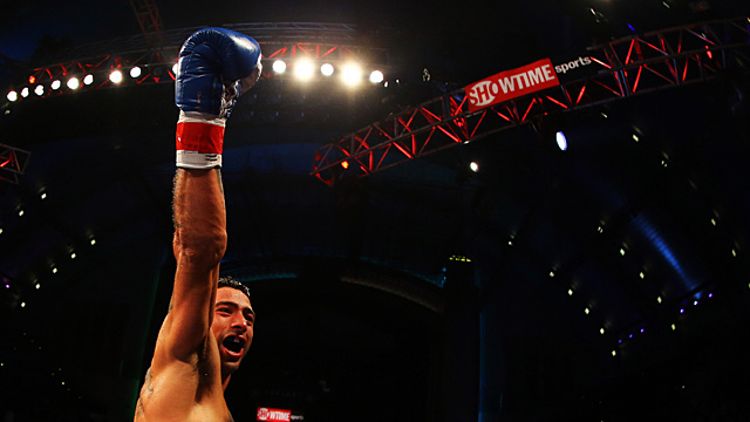 This wasn’t supposed to be a blog post about Floyd Mayweather. The Lucas Matthysse–Lamont Peterson fight on Saturday night at Atlantic City’s Boardwalk Hall had nothing to do with Mayweather. This was a fight between two of the best three junior welterweights (the division below where Mayweather fights) in the world, designed to produce a September opponent for Danny Garcia, the other member of the 140-pound division’s top three.

According to official sources, as of now, that’s precisely what it did. Matthysse defeated Peterson, and Golden Boy Promotions reportedly has September 7 reserved for Matthysse-Garcia.

But money, and “Money,” are always the top priorities for Golden Boy. After Mayweather dominated Robert Guerrero in a fight that proved wrong any misguided fools who thought Floyd might have lost a step, Mayweather again finds himself with a short list of potential attractive opponents. Especially given Mayweather’s $30 million–plus guarantee for every fight and widespread doubts as to whether Mayweather-Guerrero was profitable for Golden Boy and Showtime, not just any old dance partner will do. You can probably count on one hand the number of opponents with a shot at getting Mayweather over the million-pay-per-view-buy mark. So when a new name sneaks onto that hand, executives, lawyers, and accountants start scheduling conference calls.

The first choice for Golden Boy, and for most fans, is Mayweather vs. Saul “Canelo” Alvarez. That’s probably a 1.5 million–buy fight. But it’s not an easy negotiation. Alvarez won’t be satisfied with the $3 million guarantee that Guerrero got (he might not be satisfied with three times that), there are catchweights to talk about, and there are even considerations as to how much more lucrative the fight would be if they waited until 2014. So, if not Canelo, then who? Fighters promoted by Top Rank are out. Lineal middleweight champion Sergio Martinez needs surgery again. Devon Alexander, one recently floated name, probably lands Floyd closer to a half-million buys than to a million. With so few options, a contender can lift himself into serious consideration with one spectacular performance.

And that’s what Matthysse delivered Saturday night. His destruction of Peterson so exceeded everyone’s expectations that it may have diminished the appeal of a Matthysse-Garcia fight and injected serious appeal to a Matthysse-Mayweather fight. It’s no secret that Mayweather’s PPV numbers are built on the backs of fans hoping to see the arrogant and undefeated superstar finally go down. Matthysse probably isn’t the guy to send those fans home satisfied, but he might be the best pure puncher in the sport, and the clichéd puncher’s chance sells better than no chance at all.

When it comes to selling, however, there is also the issue of name recognition, and it’s unclear whether Matthysse is even as viable as Guerrero was in that regard. An Argentine who speaks no English and had only fought twice in the U.S. prior to 2010, Matthysse is just now beginning to generate the underground, word-of-mouth momentum that typically requires a few years to build and, coupled with some power-ballad karaoke, can turn a foreign fighter into a stateside star. At Boardwalk Hall, it was painfully clear that Matthysse’s punching power greatly exceeds his star power. This was a fight that probably would have drawn a nice crowd in Peterson’s hometown of Washington, D.C., but Matthysse’s two losses came on disputed split decisions on American opponents’ home turf, so he wasn’t keen on contending with pugilistic politics again. They settled on the relatively neutral ground of Atlantic City. (Matthysse entered the ring to AC/DC’s “Highway to Hell”; it’s unclear whether he was making a clever geographical reference with the band’s name or has simply watched a lot of ECW.) A reported crowd of just 4,215 came out to a building that holds more than 12,000. And based on an unscientific calculation from press row, the number 4,215 was probably arrived at by counting arms, not heads, then adding one to make it an odd number and throw people off the scent.

The taller, longer-armed, more athletically fluid Peterson’s hopes of winning Saturday night depended upon his commitment to moving and staying out of Matthysse’s range, but Peterson has always been a fighter who trades punches more than is advisable for his skill set. Against Matthysse, he nearly made it through one whole round sticking to the game plan. By the end of the first, “The Machine” caught up with him and scored with a decent right hand to the body and two left hooks upstairs. They began Round 2 at close quarters, where Matthysse could maul and muscle Peterson, and about midway through the round, the Argentine landed his first significant punch, a straight right that didn’t connect all that cleanly but still moved Peterson several feet across the ring. Soon after, a left to the temple — another unimpressive-looking punch as it was delivered — sent Peterson down on a delayed reaction. Matthysse has that rare power that George Foreman had, where his punches don’t appear particularly ferocious but the bodies hitting the canvas suggest they are.

Peterson never quite recovered from that knockdown, and in the third, every blow that Matthysse landed made Peterson’s knees dip. With a little more than a minute remaining in the round, both fighters uncorked left hooks, but Matthysse’s got there a millisecond sooner and many newtons more forcefully. This was a punch that did have all the aesthetic qualities we desire in our knockout blows, and that’s exactly what it would have been if not for referee Steve Smoger having the longest leash in the business. Peterson rose in a haze and Smoger let him take one more combination before waving his arms in the air.

That Matthysse won was no surprise. It was the fight’s brevity that few saw coming. Matthysse, who has produced 24 knockdowns in his last 12 fights, seems to hold the title of hardest hitter in boxing, pound-for-pound. At worst, he’s no. 2 behind middleweight Gennady “GGG” Golovkin, and in Peterson, Matthysse dispatched someone much more highly regarded than any of Golovkin’s victims. The formerly rat-tailed Argentine has stopped his opponent in 32 of his 34 victories and his knockout percentage is the highest of any active belt holder.

Before the fight, Garcia, the man waiting on the winner, predicted a Peterson victory. He seemed to underrate Matthysse, suggesting he was too one-dimensional to defeat Peterson. Or maybe he was just wishcasting. The look on Garcia’s face after the fight didn’t quite qualify as scared, but there was a hint of “I haven’t formally agreed to anything yet, have I?” in his eyes.

I spent a few minutes after the fight talking with Bernard Hopkins, who has supported Garcia, a fellow Philadelphian, throughout the younger boxer’s career. “I don’t want to see that fight now,” Hopkins said of Matthysse-Garcia. “Danny’s style, it’s tailor made for Matthysse.” B-Hop feels that the way to beat Matthysse is to play defense for several rounds and frustrate him before opening up. “If it was me against Matthysse, you all would be booing for the first six rounds,” Hopkins said. “Against a guy who can fight like that, who has dynamite in both hands, you let him blow off some steam. Peterson was doing the right thing for one round, but he either got brave or tired.”

Stylistically, Mayweather is the perfect guy to pull off what Hopkins defines as the ideal strategy against Matthysse. Mayweather is brave, but not in the thin-line-between-that-and-stupid sense, and he’s never been known to get tired. He’d probably sit back for a couple of rounds, figure Matthysse out, and then waltz to victory. If Matthysse is all wrong for Garcia, Mayweather is equally wrong for Matthysse.

But Matthysse can crack, and he doesn’t need to land his best punch to do damage. That makes him a threat to anyone. That makes him the kind of fighter people pay to see. That makes him probably the second most attractive opponent for Mayweather, who’s supposed to fight again this fall.

Mayweather-Matthysse wasn’t a pairing worth considering two days ago, but if Mayweather and Canelo can’t come to terms, it becomes one. We might still get Matthysse-Garcia in September, but if we don’t, it will be because, against Peterson, Matthysse did his job a bit too well.