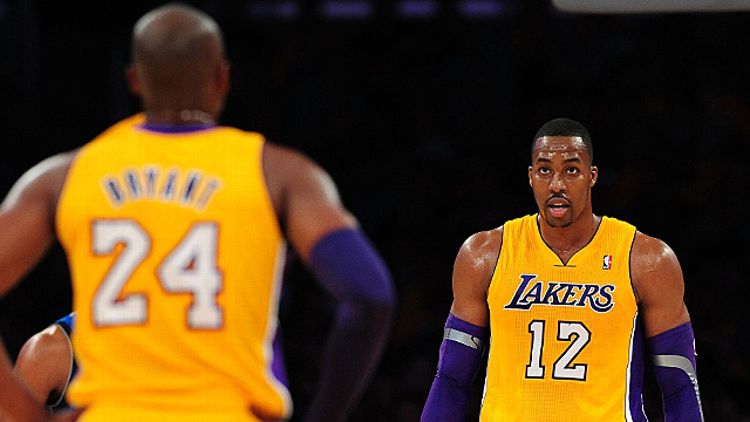 An hour before the tip-off, Dwight Howard stood at the free-throw line and yoked up his burden. Three straight shots clanged off the back of the rim. Howard turned to the assistant coach who was standing beside him and raised his eyebrows. The coach raised his right arm and lightly touched his forehead with the back of his wrist. “Like this,” he said, pointing to his elbow. Dwight shrugged. Two more shots went long. On the far side of the court, Steve Nash drilled 18-footer after 18-footer. After hitting about 10 in a row, Nash began kicking his feet out as he shot, doing his best Reggie Miller impression. Howard missed three more, turned again to the coach and held his hands out by his hips, a muted gesture of frustration. It’s always comical to watch a great athlete struggle at something that can be mastered by a 15-year-old. When the great athlete looks like Dwight Howard, the effect is magnified. I know it’s mean, but it’s pretty damn funny when someone so goddamn beautiful misses free throw after free throw after free throw.

After his 10th or 11th or 12th miss, Howard took two steps back off the line and drained three straight 18-footers. Behind me, a kid wearing a blue Kobe Bryant jersey yelled, “Just shoot them from there.”

It didn’t seem like a terrible idea, especially given the alternative. But before too long, the spell was broken and Howard began missing long again.

Los Angeles is a new town but the city has its old moments. If you go to enough Lakers games and hang out in the corridor leading to the locker rooms, you’ll see the vestiges of a time when Hollywood dollars came with a bit more privacy and dignity. The VIP fans at Staples are leathery and wear costume jewelry and refer to one another as “Chuck” or “Bill” or “Samantha.” I’ve lived here for two years and I’ve never understood how, in a city with so much space and money, a basketball team can act as the social center for the sorts of people who, 35 years ago, might have met at a “Save Patty Hearst” dinner party. Old things are everywhere at Staples Center. Randy Newman’s “I Love L.A.” still plays before each game. Jeffrey Osborne, who is a stranger to anyone under the age of 40, stood at center court and sang the national anthem for the 28th year in a row. The Lakers could have pretty much any recording star sing the National Anthem on opening night, but the Buss family seems to understand that traditions don’t hold very easily here in Southern California.

After the anthem ended and the lights came back up, Lawrence Tanter, the Lakers’ longtime public address announcer, baritoned, “And now a word from Kobe Bryant.” Kobe walked to center court and grabbed a microphone. With a grim, joyless look on his face, Kobe said, “As you know, we have a lot of expectations this season. We’re trying to live up to those expectations and bring a championship back to the city of Los Angeles. Let’s get this party started, and enjoy the show.”

It was a strange moment and seemed to emphasize what Kobe has been saying throughout the preseason — this is still his team. Whatever that might mean.

Will he or won’t he? The success of the Lakers, in no small part, hinges on that question. If he does, the Lakers could fall into acrimony; in the past, team disharmony just made him do it more. If he doesn’t, the Lakers could test out their new Princeton offense, adjust, and put together an offense that maximizes their myriad talents. But what if the offense putters out and nobody steps up? What happens when the Lakers need Kobe to be Kobe?

The Los Angeles Lakers have now lost nine games in a row. Depending on whom you ask, this either means nothing or absolutely nothing because eight of those games came in the preseason, which, as any veteran of sports yelling knows, means nothing. But these meaningless losses came with a small caveat — that Princeton offense hasn’t quite caught on. Throughout the preseason, the Lakers did a whole lot of gesturing and arguing. Passes went flying over heads, cutters didn’t cut, and the team’s second unit, cobbled together from old parts, played astoundingly bad basketball. There’s little doubt here in Los Angeles that these problems will be resolved in due time. But after last night’s loss to the Mavericks, there’s no denying that the Lakers haven’t caught up with the expected learning curve. They will be playing themselves into an offense this season.

So, will he or won’t he? When that new offense breaks down and Dwight Howard and Pau Gasol are bumping into one another in the paint and Antawn Jamison stands solemnly at the 3-point line while Steve Nash grimly tries to force the ball down low, will Kobe start jacking up contested 3-pointers like it’s 2006?

The first indication that he might came with 7:59 left in the first quarter of last night’s game. For the first time since the opening tip-off, the Lakers stood around and Kobe-watched. Kobe obliged everyone by taking his first WOOBLY (wild or off-balance leaning yowzer). He shot another WOOBLY a few minutes later. But for the most part, Kobe behaved in the first half and the Lakers looked exactly like they looked in the preseason — a fascinating, yet wholly disparate collection of talented players. You can still sense the hesitation as each player runs through a list of teammates and options in his head. It’s become clear that the process of learning the Princeton offense might take a lot longer than expected.

In an uninspired, chaotic first half, the Lakers deferred and switched and took turns holding the ball. Dwight missed five of his six free throws and looked genuinely embarrassed. Steve Nash didn’t seem to know where to go with the ball. Pau Gasol got routinely beat off the bounce and was slow on his defensive rotations. In retrospect, the Lakers breakdown should have been obvious. How can you take six older players, put them in a new offense, and not expect each one to default to the habits that made him a star?

The second half started off even worse. By the nine-minute mark of the third quarter, the Lakers were back to gesturing and pointing out where they were supposed to go on the court. A fan seated behind press row shouted, “Fire Mike Brown.” Kobe responded by hitting two jumpers, but on his third and fourth trip down the court, he passed the ball off to Pau and then Dwight. Last year, a heat-checked Kobe would have just jacked up two WOOBLYs and tried to single-handedly bring his team back into the game. Nobody felt this disturbance more than the Lakers crowd, which builds its rhythm around Kobe’s streak shooting. Without the inevitability of the NBA’s most reliable one-man show, the crowd sounded confused and frustrated.

During timeouts, the new Lakers introduced themselves on the JumboTron. If Nash seemed a bit listless and grim on the court, his “Meet Steve Nash” segment looked like a casting tape for either The Walking Dead or the FX original movie They Called Me Popovich. Nash did not smile once during his segment, and when asked what his favorite food was, he monotoned, “Lots of different ones.” Nash’s deadpan came in stark contrast to the “Meet Dwight Howard” show, which included, of course, three bad impressions and a bunch of unprovoked goofiness.

With 4:02 left in the third and the Lakers down seven, some of the fans began booing. The Lakers’ janky offense will take most of the heat for last night’s loss, but their defense was somehow even worse. Jae Crowder, Vince Carter, and O.J. Mayo were constantly open from the top of the key. Nash and Steve Blake made Rodrigue Beaubois and Darren Collison look like Isiah Thomas and Kevin Johnson. Even Eddy Curry looked unstoppable in the post.

After three quarters, Kobe had hit nine of his 11 shots from the field. But the Lakers were losing again, mostly on account of a lack of decisiveness and aggression on offense. With 9:30 left in the fourth, the fans finally gave up on the Great Laker Experiment and began chanting for Kobe to get up off the bench. He came skipping to the scorer’s table just 30 seconds later, wearing full warm-ups with a towel draped over his head.

With 6:45 left in the game, Kobe caught the ball near the 3-point line, gave a cursory look at his teammates, jab-stepped, and buried a high arcing shot over his defender. Last year, Kobe would have taken the next four shots and the fate of his team would hang on whether or not he could hit four WOOBLYs in a row. Kobe didn’t touch the ball on the next possession. Nash threw the ball down low to Howard, who tried to pass it back out. But Nash was already cutting to the basket. Howard’s pass bounced off Nash’s back shoulder. He recovered the ball and shoveled off a pass to Gasol, who missed a contested layup. On the next possession, Howard got fouled and hit the first of his two free throws, drawing a loud, sarcastic cheer from the crowd. He missed the second, putting him at 3-for-12 for the night. With Kobe standing in the corner hollering for the ball, Nash took the next two Lakers shots and then passed the ball down to Dwight in the post. After hitting that rainbow WOOBLY, Kobe barely touched the ball for nearly five minutes of game time. The ball instead went mostly to Howard, who was immediately fouled by whoever was guarding him.

The Lakers faithful began leaving Staples with two minutes left in the game. Their frustration and confusion is understandable — you can’t build a superhero for 17 years and then suddenly ask his adoring fans to start cheering for a system of heroic acts. For the past five years, the Lakers’ fortunes have rested on Kobe’s “takeover” moments. Last night, everyone in Staples Center — Kobe apologists and haters alike — got blue-balled.

So maybe Kobe won’t. Maybe he’ll play within Mike Brown’s “system” and let Steve Nash make the late-game decisions. Maybe WOOBLY Watch, our year-long tally of Kobe’s late-game heroics, will only have a few entries. Maybe the Lakers will figure things out in the next month and start ripping off winning streaks. But despite all the exciting things the Lakers represent on paper, the reality of the team seems much more static and troublesome. Mike Brown has a massive task in front of him — he must teach six veterans, each of whom has made over a hundred million dollars in the league, how to play together within a system whose appropriateness and value still has not been proven. How many early losses can the Lakers suffer before Steve Nash starts calling out his own pick-and-rolls, before Dwight Howard starts screaming for the ball on the block? How long before Kobe answers the question Will he or won’t he? with an emphatic I will?