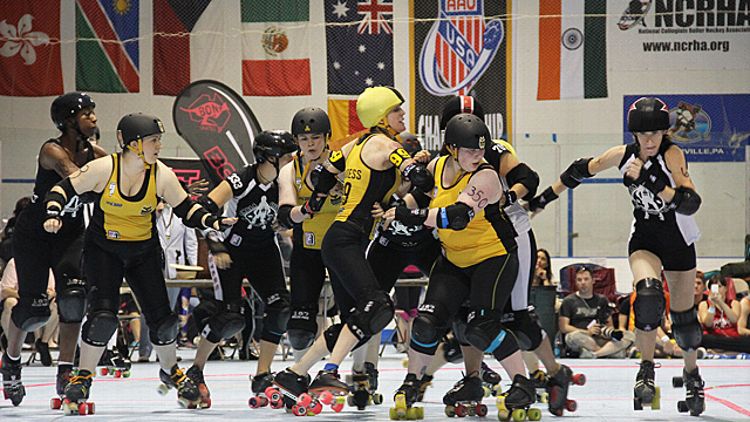 Of all the things one should know before attending the annual East Coast Derby Extravaganza, the most frequent piece of advice roller derby players offer newcomers is “Don’t forget your swimsuit.”

Officially, the event, which celebrated its seventh year over the weekend in Feasterville, Pennsylvania (about 40 regrettable-for-the-carless minutes outside Philadelphia), is a regional meet: More than 150 leagues, from the Eastern United States as well as Canada and Scotland, compete in 53 back-to-back bouts on three rinks over three days, ranging in legitimacy from a rotating early-morning all-skater scrimmage to a Friday-night men’s derby bout to a WFTDA-sanctioned game pitting Team USA against Team Canada (252-72 USA, naturally). A majority of the sport’s best players attend, and there are few times during the year to see a wider cross section of its growth in both popularity and athleticism over the past decade.

Unofficially for skaters, though, it’s “derby summer camp.” The sport’s larger, interleague events are few and far between, and even then, they’re often reserved for first-string teams; at ECDX, thousands of athletes, of all skill levels, genders, affiliations, and degrees of tattooage hole up together in a cluster of hotels and an athletic complex in the middle of nowhere, to kick each others’ asses for three days. People bring their babies, their dogs, and their aimlessly wandering, totally unenthused 12-year-olds. Teams make new T-shirts, craft mascot costumes, bring camp chairs, and reunite with friends from teams past. Oh, and there’s a pool. And a grill, and beer, and after-parties.

The biggest given going into the weekend was the total dominance of New York’s Gotham Girls, the behemoth seven-team league that rarely, if ever, strays from the no. 1 slot in national and international derby rankings. Every roller derby “team,” in every city/area, is technically a “league,” with “teams” under its umbrella. Gotham is a league, but also functions as a team when it plays away games.

Both Gotham’s major bouts, versus Texas on Friday and Atlanta on Saturday, yielded wins by overwhelming margins (313-66 and 309-88, respectively), while its B-team the Wall Street Traitors reeled in a similarly devastating win over the Philadelphia Independence Dolls (258-93).

Ask members of Gotham and they’ll say they’re on top simply because they train harder than the rest. Gotham is the definitive face of the sport, spreading positive awareness and stacking the Team USA roster with its hard-trained athletes. Few would turn down an invitation to play on the best league in the world, and Gotham has a knack for cherry-picking good players from newer, up-and-coming teams, creating an advantage that some believe holds back the sport as a whole. This weekend, watching them annihilate even a solid team like the Atlanta Rollergirls, whose formidable blockers could have shut down any other team’s jammers, felt a little like watching the 2011 Lakers wipe the floor with the Cavaliers: It’s not even that fun after a while.

That being said, 2013’s rosters represent only the first generation of modern roller derby. Junior leagues like the one trained by Gotham’s star jammer (and “the LeBron James of roller derby”) Bonnie Thunders have begun popping up over the years and are effectively the first generation of “lifers,” which could significantly improve (and equalize) the sport’s quality across the board.

At ECDX and beyond, bouts between teams ranked just beneath Gotham on derby power rankings are the real attraction (for spectators, at least). Sunday’s game between the Philly Roller Girls (ranked no. 5 by the Derby News Network and no. 11 by WFTDA) and Chicago’s Windy City Rollers (no. 6 by DNN and no. 9 by WFTDA) was unquestionably the most exciting bout of the weekend, with each team volleying the lead back and forth throughout the two periods. While many modern derby teams eschew riskier, penalty-attracting moves for carefully orchestrated, energy-conserving plays, both Philly and Windy City evoked derby’s stereotypically aggressive — and therefore infinitely more awesome — heritage, setting the game’s furious tone from the beginning. Jammers and blockers alike threw themselves at one another with extra vigor, sometimes for no reason while gameplay was paused; Philadelphia star jammer V-Diva got elbowed in the face midway through the bout, and seemed to be in the penalty box herself almost as often as she was scoring points on the rink. By the final buzzer, both teams had somehow power-jammed each other into an unlikely tie, one that was ultimately broken in overtime, with Philadelphia pulling ahead at the last second to win, 190-189. The cheers were more deafening than during any other match of the weekend (and any other derby bout this author has experienced).

Earlier in the day, Glasgow, Scotland’s Irn Bruisers and the Long Island Roller Rebels All Stars played a similarly nerve-wracking game, one that began with one of the weekend’s only major injuries a few minutes into the first period. (It’s rumored it was a broken ankle, though that’s unconfirmed since injuries in derby are afforded a healthy amount of respect: Announcers don’t report the exact injury, photographers are asked not to shoot the injured, and often the opposing teams will even kneel with their backs to the player for privacy.) The two teams nipped at each other’s heels throughout the rest of the bout, until finally Long Island pulled ahead of Glasgow in a single, last-minute jam to win 154-153.

This kind of competitive parity was seen a few times throughout the weekend; though notably even games like Auld Reekie (of Edinburgh, Scotland) vs. Ithaca’s SufferJets (207-137) and Montreal’s New Skids on the Block vs. Baltimore’s Charm City All Stars (211-168) yielded wins by significant margins. Point-scoring in roller derby is often streaky, so wide leads can be easily blown in a single power-jam.

This year’s ECDX, which organizers say counted attendance at 3,500, came a month after the International Olympic Committee rejected the United States Association of Roller Sports’ bid for roller derby’s inclusion in the 2020 summer games.

Within the sport, things are restructuring, too. Qualifying rounds for the national championship have been reshuffled to reflect leagues’ rankings rather than regional divides in order to give newer teams a leg up. In January, WFTDA enacted a new, tightened rule set — all minor penalties, which used to function on a three-strikes basis, have been upgraded to majors, making for more frequent penalty-box offenses and a clearer spectator experience — and the aforementioned junior derby teams across the nation recently prompted USARS to allow players ages 14 to 17 to compete in adult divisions.

There is a faction in derby that says the sport’s increasing regulation signals integration into the mainstream sports community and the ultimate degradation of its empowering sociocultural heritage. As a predominantly and historically female sport, derby’s story is the inverse of most other sports’, and while much of the sports world is just getting used to the idea of transgender athletes, derby’s feminist bent has attracted and welcomed those players for years (ECDX turned out to be an ideal way to spend the weekend following last week’s Supreme Court decision). The sport is evolving, and that change is coming swiftly.

Roller derby is shaping itself against the backdrop of a rapidly growing audience, as well. Granted, that fan base is often the same body of people signing up for “fresh meat” derby training, filling out B-teams in leagues, or founding their own leagues. But for derby, technically still an amateur sport that is where it is thanks largely to community investment (most players buy their own gear, which can cost thousands of dollars over a career, and many league and event sponsors are businesses run by derby girls themselves), that distinction is negligible, at least for now.

One of the defining qualities of any successful DIY, grassroots movement, especially in this era, is the blurred line between player and spectator; in the event that derby isn’t able to break into mainstream athletics, it could still sustain itself as a community indefinitely. But when you consider the pace at which that community is organizing itself, planning its future, and demanding recognition on an official scale, offering an alternative origin story in the process, it’s hard to imagine the circumstances under which the sport would fail to eventually go professional, let alone fade into obscurity ever again — even with the pool parties.