We Went There: A Heroes’ Welcome for the Blackhawks 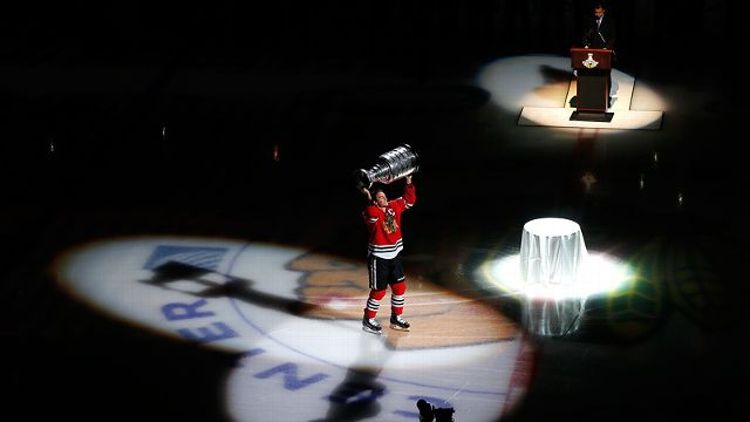 On the first day of the government shutdown, the Washington Capitals arrived in Chicago, looking to bring a momentous occasion to a screeching halt. Though the organization has long since dropped the ’90s look — a jersey featuring the Capitol building and two crossed sticks — the Caps, backed by a scorching power-play unit, had every intention of playing spoiler. Not that Blackhawks fans are particularly adversarial with this altogether random opponent. When the second Stanley Cup banner in four years is raised to the United Center rafters, one assumes a storied rival would be on hand. But such is the new normal in a realigned NHL featuring more conference crossovers.

The last Blackhawks banner raising, in 2010, was soured by a 3-2 defeat at the hands of the Detroit Red Wings, the team shoehorned into every ceremonial slot in Chicago since before I can remember — not that we had many before the Rocky Wirtz era. The 2010 home opener is something of a blur now, and Hawks fans sincerely hope the Wings enjoyed their sendoff to the Eastern Conference, courtesy of a floater from Brent Seabrook.

Though it’s easy to read into these banner-raising games, I know I’m not the only Hawks fan who felt some kind of tectonic shift when Patrick Kane buried a one-timer on a 5-on-3 power play in the first period of the 2012 season opener against the Los Angeles Kings at Staples Center. Two more goals followed in the first period, and suddenly the Hawks seemed possessed, completely silencing the emo anthems that had toasted the Kings’ Cup just moments before. You could practically feel the Hawks’ Cup envy scorching through the flat screen. A record-breaking winning streak ensued, culminating in handshakes and Bettman boos at TD Garden in Boston in late June.

Last night’s game also started with a bang when Brandon Bollig scored his first-ever regular-season goal, a tap-in. He would soon negate it, however, watching from the box as Alexander Ovechkin celebrated a power-play goal at his expense. (Having witnessed Ovi’s pregame soccer shootaround with teammates, and having experienced his concussive grunts ricocheting down the concrete corridors of United Center, I’d have to say his soccer strut is strangely more intimidating.)

After coughing up the lead and regaining it again late in the third period off a Johnny Oduya slap shot, the Hawks found themselves on the opposite end of a 5-on-3 that defined their season opener against the Kings last season. With Patrick Sharp already hauled off for goaltender interference, center Joakim Nordstrom, playing in his first NHL game, elegantly cleared the puck the length of the ice. In what seemed a potentially cruel rookie mistake, the puck sailed out of play, nearly 200 feet away. The tense 90-second 5-on-3 that ensued was killed, the game was iced on an empty-netter, and all was forgiven.

I tracked down Nordstrom in the locker room after the game to ask about the moment. “Everything just stopped,” he said, rubbing a chill from his hands and revealing a bracelet that simply read “Fuck Cancer.” Did your teammates offer any words of encouragement? “Yeah,” he said, nodding politely. “They said, ‘Shit happens.’”

Not to dwell on bracelets, but other than the Stanley Cup itself, bracelets were the accessory of the night. When the house lights blacked out during the pregame ceremony and the ice surface went all IMAX — a projection of Corey Crawford’s neck-beard suddenly occupying the entire neutral zone — the LED lights inside each Xyloband bracelet distributed to the 22,000 fans in attendance flickered in sync to the music. I later learned the idea was cribbed from a Coldplay concert, and that the lights were controlled by radio frequencies coursing throughout the building. It was a stunning display, and one that fully brought home how much this stadium has come to life in a generation. As Sam Fels recently wrote in the Stanley Cup Commemorative edition of the fan program The Committed Indian, “[In the mid-2000s] you could pull out your own intestines in a section of the 300 level and no one would have noticed, such was the distance to the next paying customer.”

Paying customers were out in force, lapping up merchandise and making sure to acknowledge the ex-Hawks who weren’t present to defend the championship title. In the lavishly produced pregame scoreboard video, it was Dave Bolland’s Cup-winning goal in Boston that received the most noticeable roar. Bolland, now a Maple Leaf, would have never gotten that rebound were it not for the deflection of linemate (and current Winnipeg Jet) Michael Frolik, who remains the only forward I’ve ever seen score a penalty shot in a playoff game that simultaneously injured the goalie.

After eight members of the youth hockey committee in Illinois helped unfurl the Cup banner, it was raised to the rafters, accompanied by weirdly aggressive chamber music, giving the night a momentary destination-wedding vibe. Though the ascent itself was a bit stilted, once nestled in the rafters, the kerning was remarkably precise, and the banner was a welcome addition to what now feels like a proper set of brass knuckles. Five Cups in more than eight decades might not seem like a ratio to boast about. But two Cups in four years, in the salary-cap era? That’s a mandate few can rally to shut down.

Filed Under: Chicago Blackhawks, NHL, Washington Capitals, We Went there

Oklahoma City Crossroads: How the Thunder Can Improve Without Russell Westbrook