Von to the Next One: How the Broncos’ Defense Has Thrived Without Its Star 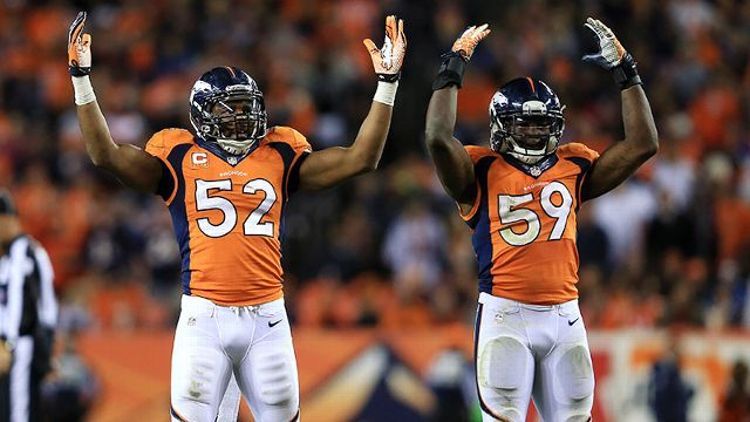 Said aloud, many of the details about this Broncos’ season barely seem real. In its first four games, Denver’s offense has scored 179 points, the most of any team since the merger. The current odds for Peyton Manning — he of the 1,470 yards and 16 touchdowns — to win the MVP award sit at -600. Denver’s odds to go undefeated are 12-1, and next week, it’s a 27.5-point favorite against what I’m pretty sure still counts as an NFL team.

The point is that Denver is good, maybe historically so. But of all the hard-to-believe facts about its start, the one that may be the most astonishing has nothing to do with Manning. This team has played its first four games without the second-best defensive player in the NFL, and barely anyone has noticed.

Obviously, Manning’s performance is one of the reasons Von Miller’s absence has been easy to gloss over. So far, it hasn’t mattered who’s playing defense for the Broncos. They could have trotted 11 Jaguars out there on defense every week and still been 4-0. But the rest of the Denver defense has done its part to at least partially compensate for Miller being gone.

Where Denver has missed Miller most is where you’d expect. Last season, the team’s adjusted sack rate was the best in the league. This year, it’s 28th. Losing Elvis Dumervil is part of that, but it’s hard to overstate how excellent Miller was rushing the passer. According to Football Outsiders, only J.J. Watt had more combined hurries, hits, and sacks than Miller last season (76.5 to 69), and according to Pro Football Focus, Watt did it with 100 more snaps as a pass-rusher. Miller also drew nine holding flags, tied for the league lead. No regular pass-rusher bothered opposing quarterbacks more frequently, and losing a player like that would leave any defense struggling to get pressure.

Everyone knows about that part of Miller’s contributions, but where he made the most significant strides a year ago was in the run game. Whether it was holding up as an edge defender or knifing into the backfield to make plays, Miller was a constant factor. His 14 run tackles for loss were fifth-most in the league last season, according to ESPN Stats & Information. And the 0.4 yards opponents averaged on run plays when Miller made the tackle was the second-best figure in football, after Watt’s minus-0.2.

Miller’s absence from the Broncos’ pass rush may be glaring, but against the run, Denver has pressed on without missing a beat. Opposing teams’ raw rushing totals have been expectedly low, given that they’re playing from behind before the game even starts, but the Broncos’ per-play figures against the run have also been pretty staggering. Through four games, Denver is tied with the Jets for the league lead in Football Outsiders’ Adjusted Line Yards metric.

So how is Denver’s run defense playing so well, despite the absence of its best player? It starts with the interior of the defensive line. Everything about how the Broncos both assembled and use their defensive front informs what they want from that group. This offseason, the team re-signed defensive tackle Kevin Vickerson, brought in Terrance Knighton from Jacksonville, and picked North Carolina tackle Sylvester Williams in the first round. Those three, Malik Jackson, and Mitch Unrein, make up one of the deepest, most widely used interior rotations in the league. Vickerson, Knighton, Jackson, and Unrein have all played between 105 and 136 snaps this year, and it’s that limited workload that allows Denver’s line to play the way it does.

By keeping their linemen fresh, the Broncos’ staff is able to encourage and expect this type of effort. This play above is an outside zone run by the Ravens in Week 1, and what stands out is the lateral movement Denver gets from its defensive line. Few teams get a better overall, collective effort in this department than the Broncos.

The 300-pound Vickerson starts the play on the left hashmark, but by the time Ray Rice goes down, he’s shuffled all the way to the right. Staying engaged with offensive linemen does two things. First, it simply clogs running lanes. There are a lot of big bodies in Rice’s way here, and he just doesn’t have many places to go.

Secondly, it prevents opposing linemen from moving to the second level to pick off linebackers. On this play, you can see that Evan Mathis and Lane Johnson (lined up here as the left guard and left tackle in an unbalanced line) are attempting a combo block on Knighton and Danny Trevathan, the Will linebacker. After initially double-teaming Knighton, Johnson should make his way to Trevathan as the linebacker moves toward the hole. Instead, we see Johnson twisting back in desperation as Trevathan makes the tackle for no gain. It’s difficult to see on this play, but I have a suspicion as to why Johnson had such a hard time.

It’s impossible to see on the play against the Eagles, but on this one, it’s clear. This is another combo block, where Ravens center Gino Gradkowski is tasked with moving up to Mike linebacker Wesley Woodyard after a quick double-team on Knighton. The only problem is that Knighton has a firm grasp of Gradkowski’s jersey, which allows Woodyard to make the tackle unimpeded. The rules here are similar to offensive holding. Grabbing is allowed, as long as it’s inside the frame, and as a group, the Broncos do a great job of using their hands.

The level of coaching is noticeable in a lot of areas, but the way the Broncos use their hands is probably where it’s most impressive. If you look at that first play again, you can see both Vickerson and defensive end Derek Wolfe fully extend their arms as they engage with the offensive line. In some ways, they’re as in control of their blockers as their blockers are of them.

Wolfe was Denver’s second-round pick a year ago, and after playing on the interior a lot as a rookie, he’s lined up mostly at defensive end in his second season. In a lot of ways, he exemplifies the Miller-less version of the Broncos’ defense. As a pass-rusher, Wolfe is way below-average for an end, but against the run, few defensive ends are better. He plays with the leverage to hold up on the play side and also does a great job of moving down the line of scrimmage while on the back side. He’s a perfect compliment to what Denver gets from Miller.

If Wolfe is Denver’s best run defender up front, Vickerson is its most impressive. He’s capable of physically dominating opposing offensive linemen, and there are at least a handful of snaps each game when he’s playing in the backfield. Here, he drives Gradkowski two yards deep before making the tackle for no gain.

The player joining him behind the line of scrimmage is defensive end Robert Ayers, no. 91. Ayers was a first-round pick in 2009, and although he’s never really developed as a pass-rusher, he’s been a significant part of the Broncos’ run defense. Last season, the one place where opposing teams had success running the ball against Denver was right at Dumervil, but this year, the players holding the edge for the Broncos have been two of the best run defenders on the entire defense.

The man brought in to replace Dumervil was former Chargers linebacker Shaun Phillips, and although he’s gone quiet as a pass-rusher after Week 1, he’s been making plays like this one all year. Phillips’s responsibility here is to maintain the edge and squeeze plays back inside, but he’s consistently taken that job a step further by actually making plays himself, often for losses. The play of both him and Ayers has really left the Denver front with no weaknesses against the run, and that’s without Miller.

Denver has done an excellent job using Miller in different and creative ways, to the point that it’s difficult to describe the position he plays in typical terms. The Broncos play mostly a 4-3, with Miller identified as the Sam linebacker. This means that on most plays, he’s lined up on the strong side as a stand-up player on the line of scrimmage, giving the Broncos what amounts to a five-man front (in nickel situations, he’ll line up all over the place). Behind that front are the Will and Mike linebackers, both of whom have played their own roles in Denver’s run-game dominance this year.

Woodyard’s contributions are no surprise. He was a full-time player last season, and after moving from Will to Mike after the preseason injury to Stewart Bradley, his brand of fast, aggressive play has continued into this year. The surprise has been Trevathan, a second-year linebacker who’s stepped in at Will and probably outplayed Woodyard through four games. At this point, Trevathan is probably best known as the guy who dropped the ball short of the goal line on an interception return in Week 1, but through four games he has 30 tackles. His speed makes him a perfect fit to take advantage of the lanes created by Denver’s defensive line, and although he had a bit of an injury scare this week, it looks like he managed to escape unscathed.

The Broncos technically have two more games until Miller returns, but ya know, Jacksonville. Really, Sunday against Dallas is the last game Denver will play without its best defensive player. And we haven’t even mentioned Champ Bailey, who still hasn’t played a snap this year. That’s the scariest thing about this team. For as good as it’s been, it’s only going to get better.